What is the best way to "Hit hard targets soft and soft targets hard" (in order to avoid injury in fight)?

I learnt this phrase from @Philip Klöcking. He explained:

hit hard targets soft and soft targets hard, ie. slaps to the head, punches to the torso, kicks to the thighs. Same goes for blocks/parries. Blocking a shin with your forearm will probably have unwanted consequences, while meeting it with the side of your calf or a soft hand prevents injuries.

Is there a list of rules what parts of the body can be used to attack or block the other fighter's parts? In addition, is there a body chart that shows what parts are soft and hard? Is there any book, video or other source that explains it? What is the best way to train using this maxim? Is there a way to solo train this technique i.e. self training or punching bag?

Traditionally, the information on where to strike with what has been conveyed via charts, today often available in poster form. 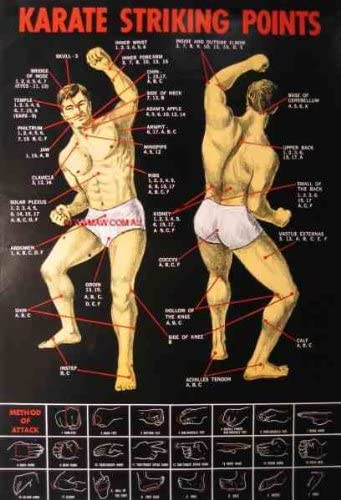 As regards training, I've usually experienced it via my teacher watching me execute strikes, either halted ones on a living target, or more deliberate ones on a humanoid dummy and critiquing me. I could see virtue in labeling such a humanoid target and/or providing feedback from the strikes, whether it's making parts of it hard or soft (hit the jaw with your fist and your hand will hurt from the edges. Slap the belly and you can feel where it doesn't do much) or embedding sensors (too high-tech, really, but I'm sure it will eventually get easy enough to be common).

Honestly, most people just learn from experience in training with less than full-force blows, and then working their way up in actual fight scenarios where a mistake would cause more damage.

Slaps can be devastating if the full body is behind it. I watched a friend use it to the side of the head against the leader of a group that was considering a brawl, and he followed through, slamming the opponent to the ground, and startling and demoralizing the group.

Slaps the fave can also be applied more quickly than most punches, and cause the eyes to tear up. Hard slaps to the inside of a punching arm can actually be effective blocks, and even confer advantage for a followup center-line strikes.

I do not like punching anything hard with my knuckles under any circumstances, and use palm strikes (or forearm strikes for targets like the collarbone.)

However, aspects wudang striking are widely misunderstood. There, I'm countering the opponent such that my fist or plam or fingers make contact, then "focus", putting all of the force into the body. (Typically solar plexus, hip or shoulder joints, or kidneys.)

Wudang also has strikes that have power/speed before making contact, but almost no one can really do it because it requires being totally relaxed except at the moment of contact, and typically people don't have the requisite level of relaxation until their mid-30's and beyond, specifically after the body starts to weaken such that brute force is increasingly less effective.

Finger flicks to cause them to tear, pokes to disable to organ, or thumb gouges to pop out the eye or cause significant trauma

A quick, light strike is sufficient. Less power typically means more speed. Horizontal leopard fist is optimal, but you should train your knuckles punching a bag similar surface, and pressing into things.

Obviously better against males. But people defend this area, so use only if they leave it open, or in conjunction with an upper body feint. (There are some techniques where you make both a groin & upper body strike, such that even if one is blocked, the other can connect.) Quick and light is sufficient to gain a moment of advantage, hard as you can if you already have advantage. Also a stomp target if the opponent is on the ground.

Tear if desperate, but it takes a lot of finger strength. Quick, light strikes to the ears can be effective because painful.

These are often overlooked, but a major target of bagua palm and finger strikes. The hip cavity, in particular, has a lot of nerves, so the strike doesn't even have to be very hard, especially with finger strikes. (The hip cavity is also a phenomenal location to push into to control that joint, and force the opponent into an unbalanced or disadvantaged position, similar in spirit to stepping down into the back of the knee.)

This is often overlooked, but there are a lot of nerves in that area. It's no so much a place you strike as push your thumbs into.

In general, unless the opponent has well developed abdominal muscles, or is fat. (Many brawlers have "hard fat" and the gut protects them.) All fighters have strong abdominal muscles, so this is more of a target against an out of shape attacker.

Here we mean around towards the back of the abdomen, which doesn't have the muscle protection of the front. Hard enough strikes can cause organ damages, but lighter, quicker punches also hurt, and can be part of a larger overall strategy.

Here I'm not talking about the bone, but the cavity between back of the skull and neck. This is a target for saps, and although striking there seem ineffective in MMA b/c the striker are usually being grappled and off balance, but I've seen a spinning back elbow knock someone out with this in the octagon. I'd personally treat it as a hard target & use a chop b/c the skull is, but punching into the area potentially more devastating.

Soft target b/c it's mostly cartilage and easily broken bone, but semi-hard because the skull is behind it. Punching to this with this area should be ok, especially if it's more of a pop than a full power-though, but the septum can also be smashed with the palm. Not generally decisive, but will make the eyes tear up, and can inhibit the breathing.

As far as hard targets, anywhere with bone. Only use palm strikes unless you're willing to take knuckle damage. The jaw is an optimal hard target, where an uppercut or hook can knock a person out. Temples are also a hard target, but clearly effective, many systems utilize both palm and knuckle strikes to that area. Also solar-plexus, but you've got to be able to hit really hard for this to be disabling. Tai Chi uses the "press" move to push into this area, but that press can also be a sufficiently powerful strike, and, at a high level, they say one can focus after initial contact into the solar plexus to cause the heart to fibrillate. (Experience tells me this is possible, but there are likely very few people alive at any given time who can do it, by which I intentionally exclude most masters and practitioners, including myself.) Even a non-disabling blow to the solar plexus hurts. Collarbone we'll call a hard target b/c it's a bone, but one of the most easily broken (designed by nature to break to make falls more survivable.) I train to break it with the forearms, sort of a windmilling motion with the full force of the body behind it, or from a vertical bagua spin, but these takes significant internal training to generate real power and speed, so I'm not the best person to recommend external techniques for that target, though many exist.

Not the answer you're looking for? Browse other questions tagged training self-defense self-training striking or ask your own question.