Is it effective to use a carabiner as tool in real fight?

Is it effective to carry and use a carabiner as self defense in real fight? Does it endanger your knuckles and could it break them when you hit your opponent? If it is recommended, what are the recommended characteristics and dimensions of that carabiner? (i.e. what material does it have to be made of? What is the recommended KN - kilo newton that it is designed to carry? What is the thickness and the size?)

As you suspect, using a carabiner like this will only damage your hand. Even brass knuckles are bad for your hand.

But if you want to find out for yourself, you can just try it on a punching bag. Go very light and then gradually increase the power. You probably won't get very far before you realize that the carabiner will just rotate in your hand, causing it to crash against the bones of your fingers upon impact. Instead of having a nice soft target you're striking your hand against, suddenly the metal carabiner becomes part of the punching bag you're punching. Imagine just winding up and punching a carabiner taped to a punching bag. That's basically what you're doing. It's not going to feel too good.

Some places will make custom brass knuckles specifically for your hand. Supposedly it means there will be less chance of slipping. But they still slip, and when they do, you will be in intense pain.

A lot of people think using a roll of quarters or something will make their punch much more powerful. It does, but it also makes the bones of your fingers much more likely to break upon impact on someone's head or jaw. It can also throw off your balance, as you're not used to punching with a weighted hand. And in some cases, it has caused people to have elbow and shoulder injuries, because the repetitive nature of the practice causes stress and damages tendons over time. Bad idea.

In my opinion, your best bet is to carry something to wrap around and protect your hands. Something like a punching bag glove. You can use a sock, too. Or you can cut out a section of denim from an old pair of jeans you're going to throw out, and just use that to wrap around your fist. It will allow your fist to be tighter and more solid. And it will help protect your hand's bones from breaking.

Everything else (brass knuckles, rolls of quarters, carabiners, kubotan key chains, etc.) just end up getting you hurt.

Steve Weigand pretty much nailed the important bits about potentially damaging your own hand with something like this, but here's a little addition: in an actual street fight/self-defense situation, you REALLY, really, don't want to essentially tie your four, non-thumb fingers together. Not all bad guys are going to stand face to face with you and exchange punches like a boxing match. You'll most certainly want to forego the additional pain you can inflict with a small metal object wrapped around your fingers for the freedom to move your fingers individually, grab on to a fence, plant your hand on the ground for stability, grab someone's hair, grab on to someone's free arm while they're on top of you so they can't forearm smash your nose, etc.

Most street scuffles quickly devolve from a punching match, to a grappling, wrestling, choking, overall messy situation, and I'd rather be able to splay my fingers apart for various reasons than try to throw around a few grams worth of metal.

There's a reason why almost all MMA fighters use the same style of open-finger/"half-finger" glove:

MMA gloves or grappling gloves are small, open-fingered gloves used in mixed martial arts bouts. They usually have around 4–6 oz of padding and are designed to provide some protection to the person wearing the glove, but leave the fingers available for grappling maneuvers such as clinch fighting and submissions.

It makes little sense to use a carabiner as illustrated in the video, as explained in existing answers.

It may occasionally make some sense to hold and use one in another way: placing it in your palm and wrapping the fingers and thumbs over it, such that the "fat end" projects slightly from the little-finger side of the palm. This will give you a steel striking surface, and the rest of the carabiner will rest against a large surface area of relatively fleshy palm and fingers, spreading the impact to your own hand and minimising the risk of damage. The grip would be largely similar to using the base of a torch or keyholder: 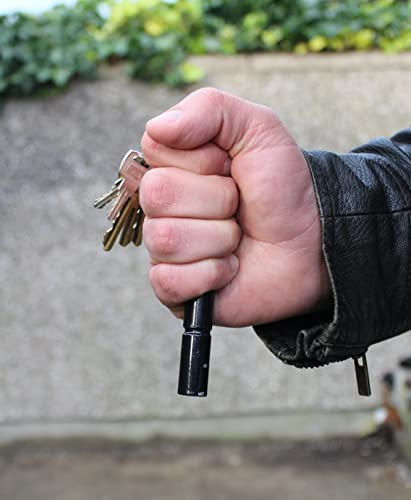 (image copied to illustrate the kind of grip I describe above, turned up by a google image search from a website titled "Gentleman Warrior Self Defense System Volume 3, Kubotan" that I otherwise have no connection with or knowledge of).

Having that hard surface to strike with - hammerfist style - may help a weaker person inflict significant damage on a stronger person - evening things up a bit. A strike to sensitive targets such as the nose, teeth, temple, knee-cap or collar bone may be made more effective. I'd only suggest considering it (or more generally, grabbing anything similar to fight with) if you felt you otherwise weren't able to defend yourself, felt this might tip the balance in your favour (and not just make the other person angrier and more vindictive), and the fight itself was unavoidable.

Hammerfist style strikes are often easy to block though - your striking arm can be easily grabbed, so this will work best with the benefit of surprise, when dark, or when combined with a feint or combination attack. Once you strike and they're aware of the carabiner, if they're still a threat and you still can't run/escape, then you'd want to get as many follow up strikes in as fast as possible before they can adjust their defensive tactics. If your arm does get caught and they're much stronger, and you don't know "escapes" to twist your arm out of their hold, then instead of struggling uselessly - hit quickly with a still-free limb (palm, elbow, knee, foot) to another vulnerable target and hopefully they'll let go of the hand they've grabbed.

A skillfull but weaker person could also use the carabiner to inflict damage whilst blocking - striking shins or instep or the ulner or radius bones in the forearm, or even at the wrist. An untrained person has neglegible chance of lining up their hand with a particular point in the attacking limb and blocking effectively.

All that said, if you're planning to explore this, do follow Steve's advice and try hitting a punching bag or similar target that way - gently at first - so you can learn the best grip and whether it'll hurt your hand. Further, JJC8008 has a good point, and you should be prepared to pocket, drop or throw the carabiner at some stage during a fight if it becomes a net liability and you need to grab something / wrestle etc..

Any equalizer is typically better than no equalizer, but I would not personally use a carabiner because it's not made for this purpose, and you can't grip it effectively:

This also means that the force going into the opponent is diminished, reducing the effectiveness.

If the hand is sweaty, this deficiency is exacerbated.

It's also quite telling that the linked video recommends it, but doesn't demonstrate actually punching anything with it.

(I'd much prefer a sturdy U-shaped bike lock, or a bike chain with a heavy padlock attached to the end.)

Not the answer you're looking for? Browse other questions tagged self-defense weapons or ask your own question.

4
Is a fist with a kubotan effective and does it endanger the user's hand?

12
How does Bartitsu's "foot hook with a cane" technique work?
2
Which arts use the Naginata?
4
Surefire tactical flashlight effective on sunglasses?
5
Act first as fast as you can and surprise in real fight
4
What is the best way to "Hit hard targets soft and soft targets hard" (in order to avoid injury in fight)?
4
Is a fist with a kubotan effective and does it endanger the user's hand?
4
Is "taking off your jacket" still recommended as the go-to strategy for knife defense?