If you've ever seen a kung fu fan form, you probably came a way with the impression that it's a pretty dance, with no real martial application (and, quite frankly, searching recently for videos online, I couldn't find anything remotely convincing.)

But there actually are solid martial techniques, some quite brutal, and several dimensions to how it can be applied in combat.

My teacher made me learn fan to facilitate my straight sword practice (and for teaching kids classes;) and a closed fan is actually an excellent tool to practice jian waist and wrist techniques in a small space.

(It should also be noted that fan a weapon you can bring on an airplane, because it's not perceived as a weapon, and I suspect most martial artists would take a shallow cut with a boxcutter in exchange for a crushing strike to the opponent's larynx.)

Who else landed here trying to see the practicality of Kitana's fan in Mortal Kombat? 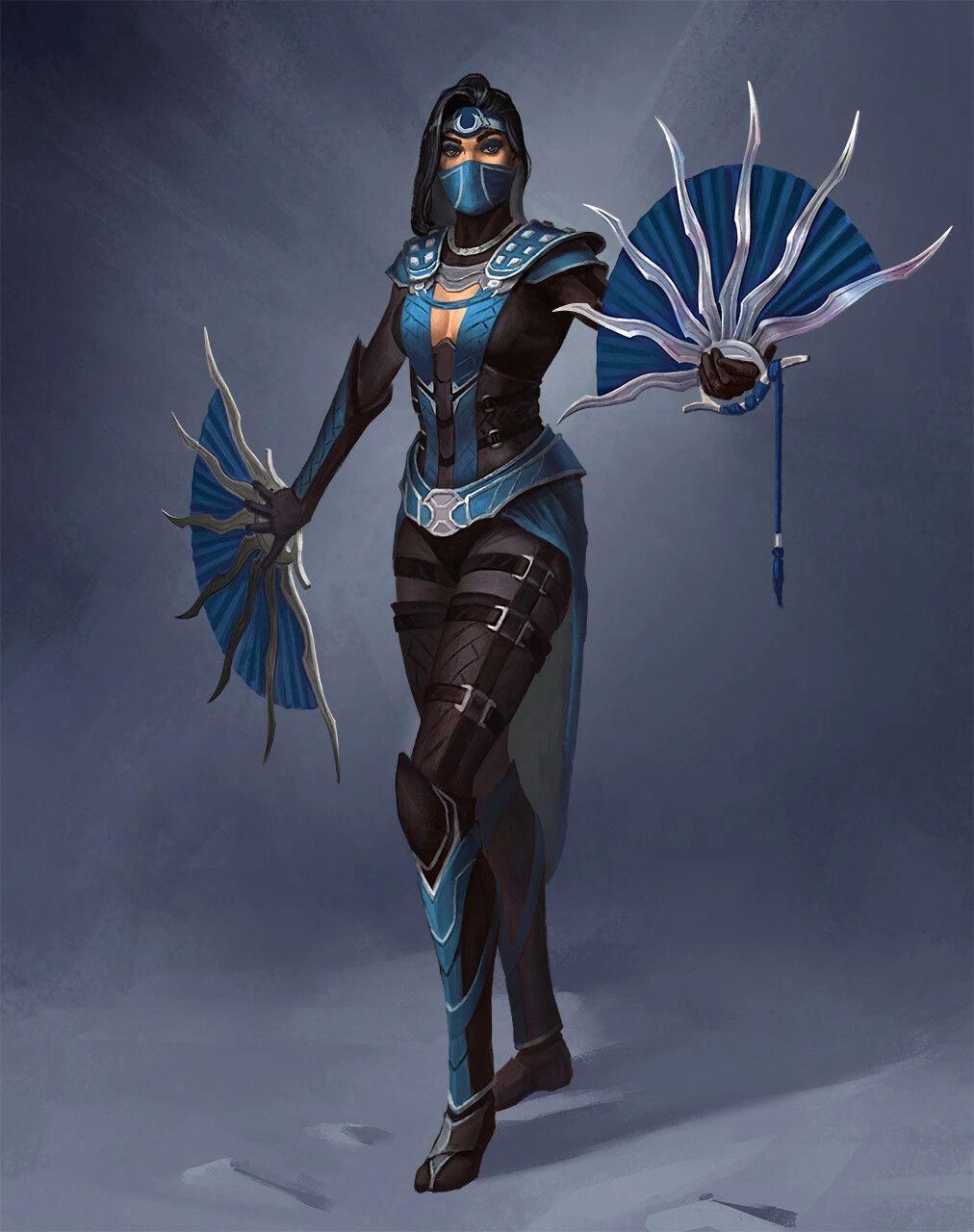 Tessen-jutsu is actually a Japanese art.

In essence the war fan is a "Club" when folded and a catchment system for blades when closing.

Contrary to popular culture, trying to catch a blade or weapon with a war fan, though doable is dangerous. Tessenjutsu prefer avoidance of the primary adversary weapon, THEN ATTACK. Throwing the weapon, is equally stupid, because now you have NO WEAPON.

If, say, I come at you with a knife, you can dodge the knife attack, swat the knife with the iron tessen and strike the face/hand.

I’m going to focus on the applications that any trained martial artist with a little weapons training can execute, beginning with the finishing moves. Bamboo wushu fans are more than sufficient.

These strikes are very similar to how one uses a kubotan, and can end a conflict if applied well. Essentially, the fan is closed, the wielder has left about an inch of space between the bottom of the palm and butt of the weapon. This techniques can also be used to strike the temple.

This is obviously a potentially fatal strike if executed with sufficient force, damaging the trachea, so use caution. This can be applied even with very little training, due to the shortness and lightness of a bamboo fan, compared to the skill required for sword or spear.

This was a great answer by LazyReader, "wrist bone or between the ulna and radius, near pressure points" and I will only elaborate that it should be effective against a knife, because of the number of nerves, which, if applied correctly can cause spasm or loss of feeling. (It also hurts like a [redacted], speaking from personal experience;) Here the bamboo is arguably ideal because of the quickness—metal fans that sometimes appear on the market can be overly heavy, and could even present a disadvantage against a knife for this reason. Bamboo also seems to distribute force in an optimal way to affect the nerves.

I believe it's the periformis muscle and surrounding nerves. Regardless, man is it nasty, and it will definitely cause spasming.

This was another application LazyReader astutely referenced, and I'll only add it's plenty nasty even with a bamboo fan. The bamboo tines are strong enough to break the skin, and, if they make contact with the eyes, cause significant trauma. (Forget a sharp stick in the eye—getting poked with any stick in the eye is terrible, and there's also the possibility that the bamboo breaks and splinters, which could cause puncture wounds.)

This one gets forgotten, but there is soft tissue under under the chin, glands at the side, and it's not a strike most people will expect. Pushing up this way can force the opponent's head up, which has multiple advantages (potential to unbalance, reduced visibility.)

These are the techniques that require significant training, because they involve opening and using the opened fan in a less direct manner.

This applies to fan with fabric connecting the tines—in the bamboo wushu fans would will notice about an inch of extra fabric at the ends. "Shooting" the fan (snapping it while open) across an opponents eyes will cause them to tear up, and there is also the possibility of cutting the cornea (think paper cuts.)

This is where you snap the fan open, or "strum" it in an in-between state. It's pure distraction and effective b/c it's [redacted] LOUD as [redacted] with a bamboo fan, painful on the eardrums when applied correctly close to the head, and it's unlikely anyone is not startled—even people who are used to it don't enjoy it. One would use this to distract before applying a strike.

This is my favorite, and it was years before I even realized what was going on. Essentially, the wielder can open the fan with the palm downward at a ~45 degree angle so that it blocks opponent's view of the wielder's feet, such that the wielder can connect with a heel kick to the inside of the opposite knee, stomp to the bridge of the foot, or, if being gentle, simply control the opponent's knee with the instep, forcing them to the ground.

[The fan can also be used in joint locks, but these techniques are more complex, and therefore more risky, and require significant training and two person practice. An open fan can indeed also be used to redirect a weapon, but requires significant training, finger strength, and is still quite risky against an edged weapon b/c the fingers are exposed.]

There are a number of strikes in forms that likely only work with a bladed fan, which is an unlikely real-world weapon, but I'm going to list them to give people an idea of how something that looks so pretty as a fan form is actually as vicious as it gets.

The blades are probably leaf-shaped like some throwing daggers (I've seen a picture somewhere,) ideally light steel, probably with some springiness (ideal for not breaking when redirecting weapons such as spear or sword.)

The form has numerous blocks/counters with the fan, and includes palm strikes after changing the fan to the off-hand (done this way per the element of surprise.)

"Shooting" (Snapping the fan open horizontally with focus, palm up)

The first is done in "sit step", the second in "bow step".

Even missing the eyes and cutting the forehead is advantageous b/c the forehead bleeds profusely into the eyes—this is an old fencing/knife fighting trick.

The following strikes are all applied with the open fan.

Upper arm would probably be optimal—more meat and damage the bicep or tricep. These applications are typically applied with pakau walking.

This movement is done in the spirit of a fencing lunge, with the knee of the back leg & instep touching the ground. Split is optimal for women, because it's an instant level change with even more root than the lunge. The level change is to drop out of the path of the attach, and the extra rooting b/c it's meant to respond to a lunge or charge.

Meant as a finishing move.

The the following move is interesting—shifting back to the back foot to a standing position, both feet rooted, which is rare in wudang, or, even better, from the split popping back up without backing up, striking forcefully in the direction of the attacker with the empty knife palm to push the body away as you withdraw the blades from it, all power from turning and snapping the waist. (The fan ends up open in an "embrace position", palm up and inward at the waist, such that the elbow makes a powerful strike to the rear, balancing the force.)

This last is in many ways my favorite b/c the follow-through is flipping the fan around to fan yourself and smile, which is cheeky (to piss an opponent off), badass and also a guard position.

[These all come from Tai Chi Dragon Fan, which is more of a pakua form, containing palm strikes, wheeling, coiling, and very difficult pakua walking b/c the changes are on the 5th step instead of the 8th, which involve changing the hand holding the fan, and one group of which should technically be done sunk lower than regular pakua walking because the first 5 steps involve cutting the ankles. (This is the form I practice to remind myself I'm not as good as I think b/c it's the most difficult to do well from a martial perspective;) Some of the applications show up in regular tai chi fan & shaolin fan.]

Not the answer you're looking for? Browse other questions tagged kung-fu wushu application or ask your own question.

9
Where can I find display cases for Chinese Martial Arts weapons?
10
What are the applications and principles of this particular seven-star mantis stance?
8
Chinese Dadao info?
5
What should I be looking for in my first, trial class? [For Chinese arts specifically]
6
Why do chinese martial arts sometimes move the sword around the neck?
3
Which chinese martial art is known in the West as kung fu?
7
Function of tassel in Chinese straight sword?
3
Applications of "Needle to Sea Bottom"
5
Meaning of the Chinese Sifu? (Shifu)
5
Why does the offhand extend forward in Chinese straight sword combinations?