Best way to kick an opponent on the ground?

People with extensive street fighting experience typically recommend putting an attacker on the ground, either with strikes or a throw, and then kicking them until they can't get up.

I was advised that toe kicks are optimal, because it concentrates force in the smallest area, and they can be executed quicker than stomps with less commitment of the body, so less chance of the foot being grabbed. The caveat the here I'm taking about a shoe with a heavy enough sole that it's the sole, not the toes, making contact. (Recommended targets are the head and kidneys.)

Thus, I'd be very interested in what Karate and TKD practitioners in particular would recommend, both for specialists in kicking, and those who don't specialize.

A judo perspective: if you throw an opponent, you want to finish in a standing position with control of an arm. This gives you options: you can disengage, you can continue into more grappling, or you can kick/stomp the opponent from this position. There is not much the person on the ground can do at this point; you have giant lever to control their movement and can kick them much quicker than they can readjust position. You can certainly kick or stomp without the opponent catching your feet effectively.

From this position, I would stomp on either the head or armpit area. You can combine an upward pull of the arm to maximize impact. I would also expect a serious chance of killing or maiming the opponent. 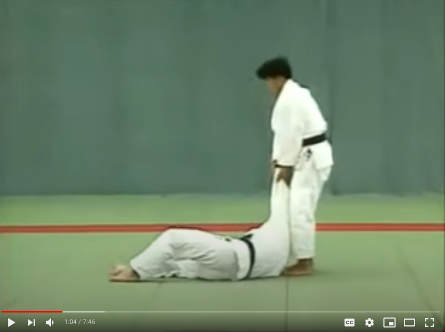 This is a still from Nage No Kata.

I've studied a variety of arts, but mainly an old style of taekwondo / tangsoodo (~20 years), hapkido (3), and kyokushin karate (6). The only techniques I've seen in TKD that are specifically intended for hitting opponents on the ground are a few stomping kicks - and they tend to be mixed in with step-sparring exercises and appear in a couple patterns, but not be used in sparring (i.e. read as "we don't practice them enough to use them reliably in chaotic situations"). People also sometimes practice using turning/roundhouse kicks, front kicks, side kicks, pick kicks from the ground to another grounded opponent - sometimes in a downward direction - but again in pre-arranged sequences and demonstrations.

In the older forms of taekwondo - closer to the predominantly Shotokan origins of the art - the ball of the foot was generally used, rather than the instep. I don't recall any mention of kicking with the toes in General Choi's encyclopaedia, though I haven't looked at it for a few years, and I've never seen anyone do it or suggest it in training. Whether you use the ball or toes makes little difference to the chance of having the leg grabbed, and both have relatively small surface area.

I'd say the general attitude / strategy in TKD is that if you've knocked someone down, you expect to have done it well enough that they stay there, and if they don't - when they get up you knock them down again. If you see you need to do more while they're on the ground, you wing it - but there isn't much training for it. Given the increased likelihood of getting caught up and/or taken down yourself, being on your feet and mobile isn't such a bad idea, but it does potentially give them a reprieve and second chance. If you're skillfull it won't be much of a chance though.

It's common to kick with the toes in some Okinawan Uechi-Ryu karate ( see https://youtu.be/HWOn0ZY4ev8?t=44 ), and there's a lot of tough conditioning done to make sure that's practical. I'm not sure if they do anything specific to practice kicks to opponents on the ground though. The whole toe-kick thing hasn't been brought across to mainland Japan in Shotokan or Kyokushin.

Hapkido mixes in more kicks with the takedowns and throws, and you do practice kicks from the ground and to the ground in sparring (if your school spars - not all do) but it definitely suffers from the jack-of-all-trades-master-of-none problem. Often sweeps, joint lock takedowns and throws and are done in such a way to set the opponent up for a kick, or to hold them prone on the ground. If the opponent is moving freely on the ground though, it's kind of up to each person to get the hang of it, rather than there being particular kicks or strategies I've heard enumerated for that situation.

I have mainly learned Shorinji Kempo. This style has a great many kicks and punches to people who are pinned to the ground.

The general rule is that you hit wherever you can reach from the pin, but pick weak points.

Just like any other kick you don't want to hit with the toe (unless you are wearing steel toe caps or similar). Kick with the ball of the foot or with the heel.

The other thing that you can sometimes do is use the fact that you have pinned your opponent to your advantage in the strike: For example if you are locking a wrist with the elbow against the ground your opponent's stomach will rise above the ground as they try to unwind the pin. This is an excellent time to strike the solar plexus as it becomes exposed and unprotected by stomach muscles.

There are similar examples that apply to kicks. for example if you have pinned someone face down and the threat of a second attacker is preventing you from keeping that position you can adjust the pin as you move to allow a kick, again to the solar plexus.

If your opponent is not pinned you will often find it very hard to kick as they will put their feat towards you to fend you off. It's a drill in it'self to learn to do this.

Not the answer you're looking for? Browse other questions tagged kicking streetfight or ask your own question.

0
"Kill, incapacitate, or come along quietly?"

3
Best moment to land a low kick?
10
Some crazy kick identification
2
What is the 'best' way to train / practice back flips?
0
What area of the leg should I perform a turning kick with?
4
Is the Push Side Kick a Taekwondo technique?
2
How can you keep "three feet on the ground" and still perform an effective kick?
6
How fast should you be able to kick?
1
Kick with front leg vs. back leg
3
Muay Thai, how to Parry Teep Kick in a Safe way