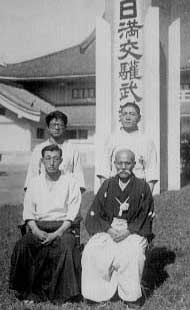 I found the same picture at several websites.

According to this blog, the picture was taken in 1942 at the Kenkoku University. It also mentions "(Manchria)" but that's probably a typo for "Manchuria", the old name for north-east China which at that time was under Japanese control.

Another website mentions that the building in the background is Shimbuden Hall and describes the man standing on the right as "Hideo Oba".

This page confirms both the year, location and identity of Hideo Oba. Since the people in both photo's have a similar position and are wearing the same outfit I'm guessing that both photo's are taken on the same day. If this is correct then the occasion was "the 10th anniversary of the founding of Manchukuo", which is the Japanese name for Manchuria. Between 1940 and 1942 Ueshiba visited Manchuria several times for teaching and demonstrations and it has been said that this was the last time he visited.

Not the answer you're looking for? Browse other questions tagged aikido history or ask your own question.

8
Origin of the "pinyon" in Villari's Shaolin-Kempo-Karate system?
9
What is the cause for Northern and Southern Chinese kung fu differences?
12
Who were the first female aikidoka?
7
When was the Southern Shaolin Temple destroyed?
8
Aikido - overcoming tension
10
Video evidence of Aikido applied against a resisting non-aikidoka?
7
Explanation of the goshin-ho kata…
8
Did Ueshiba successfully explain his aikido knowledge to his students?
7
Source: Hélio Gracie being offered a Kodokan Belt and refusing?