Is using the Millwall Brick in a street fight advisable?

I found, in practice, that using something called a Millwall Brick boosts efficiency and effectiveness in striking, and I am thinking about the practicability of its implementation in actual street fights (as a hypothesis). But...First things first, this is basically what a Millwall Brick is: 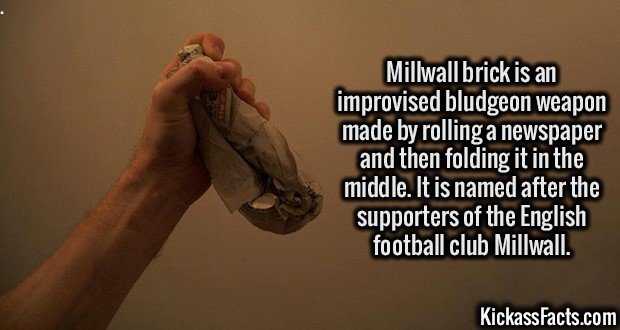 If you make it with the right materials using the right method one end of it is supposed to be as solid as a rock.

What you do is hold it like that in the picture and use a stabbing motion to the nose, neck, temple or other vital areas, or you could hold it the other way around and stick it in the assailant's abdomen.

Another advantage is that it's made of paper, so it won't really appear as a threat untill your opponent is hit.

Is it advisable? Or are there dangers I did not foresee?

While it only takes a few seconds to roll the newspaper to make the weapon, it does take time and attention to do so, so you're unlikely to be able to do it on the spot, in a crisis situation. Once rolled up, it has to either have constant pressure put on it to stay in shape, or needs to have some sort of fixative like tape used to keep it in shape, so the odds aren't great for preparing it in advance, pretending it's not a weapon, and then using it. Once assembled, it's basically just a stick, used for attacking in the same way as a stick. Ultimately, its intended use is for creating a sneak attack attack weapon in a situation where you've decided on a target, and have a few seconds to prepare to attack them.

If you plan on self-defense, you're better off just carrying a stick. You're probably not going to be able to fashion it after being attacked, and you're not going to be able to prepare it in advance in any way that maintains the property of not appearing to be a weapon while making it still suitable for use as a weapon. And if you are planning malice aforethought, other than the obligatory note that this is almost certainly illegal, and we advise you against it, you're still basically just beating someone with a stick, so afterwards, there will be the same sort of forensic evidence left behind, so the "concealed nature" of the weapon won't help you there.

The only case where I could maybe see this as a useful skill to learn for self defense, is if you're in a situation where you are under imminent threat, but have a bit of time to prepare to attack back, but even then, I suspect you'll find better weapons on-hand.

There have been similar questions on this forum relating to improvised weapons (e.g. To punch with keys or without?).

At the time of writing my answer, there isn't anything to suggest location (tag or otherwise). I'm in the UK and it is my understanding that using an object as a weapon, regardless of the intended purpose of the object, will negatively impact any subsequent legal process (https://www.haymanssolicitors.co.uk/section-18-assault-grievous-bodily-harm).

Don't get into sticky situations in the first place and you won't need an improvised weapon.

Not the answer you're looking for? Browse other questions tagged self-defense weapons striking streetfight or ask your own question.

7
To punch with keys or without?