How to respectfully disagree with Coach or Sensai?

I currently go to MMA gym with Muay Thai, Boxing, and Jujutsu. The boxing coach has slightly different advice: wants me to utilize a slightly square/wider stance below (eg Mike Tyson and others used). One thing I learned, everyone has different body type features, so one adjustment won't work for others. No one wants to switch gyms because of one boxing coach, when the other Muay thai and BJJ instructors are great. The boxing coach is great himself (has unique advice sometimes).

How does student respectfully disagree with a coach/sensai while keeping respect in the gym? A change in my stance, makes athlete redo rhythm, spacial location, flow for my punches, it just misaligns person's game. Disagreeing with a instructor at a 'dojo' and refusing to take the advice can get athletes snubbed. So want to be careful. I feel like saying, "well my last boxing coach or the internet resource talk about" however for some reason that sounds silly or seem like really wouldn't care. And at the end of the day, the guy could kick most anyone bu-- in a boxing match. The strongest of men have the highest of egos. I should tell him hell with the advice and man up, but better to deal with things in life diplomatically. Any advice from coaches or pro expert students would be great.

This is just one piece of advice different, along couple others. I brought the issue up once casually, he tends to disagree. 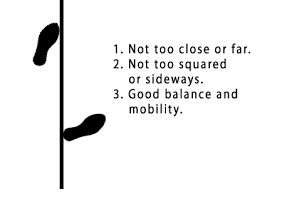 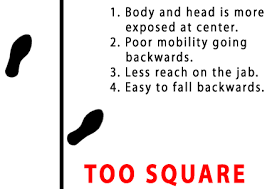 It might be a little premature for you to be disagreeing with your teachers. Learning what they have to teach you - regardless of whether it differs from other advice - might in fact help you develop into a more well-rounded fighter, capable of drawing upon a variety of techniques to refine your own style.

The respect you seek to display might be best demonstrated not by voicing disagreement, but by politely asking questions which seek to understand your teacher's rationale for promoting a particular set of techniques.

An experienced teacher might be justified in becoming slightly frustrated by a student who bluntly challenges them from a position of (relative) ignorance, but a good coach will likely welcome questions and should be able to answer them with confidence.

In short, questions demonstrate respect. Stubborn argument - especially when it comes from a relatively new student - does not.

Once you have developed the ability to perform the techniques described by a teacher, and have experimented with them in sparring sessions and/or fights, you will have better grounds for either accepting, rejecting or modifying their advice.

When you decide to specialise (in MMA for example), and once you become proficient in the basics of the various styles you are learning, you might approach your MMA teacher and discuss whether it could be appropriate for him or her to liaise with your boxing teacher in order that the boxing teacher work with your MMA stance when coaching you.

Once you begin sparring in earnest (if you haven't already), you will very quickly learn that during combat, an ability to attack, defend and move from a variety of stances becomes an enormous asset. Training narrow and wide stances might be difficult at first, but if you persist with both, you will be a better fighter for it. Lomachenko credits much of his incredible footwork to the dancing lessons he took during a four year hiatus from boxing. This knowledge was clearly valuable, despite that fact it originated from a world unfamiliar to most fight coaches. The lesson here is that there is no reason to limit yourself to orthodoxy, when you can become capable of maintaining balance, power, speed, defence and movement from almost any position.

Don't be in a rush. There's no point in quickly accumulating a wide range of mediocre skills. You're lucky to go to a gym where you are exposed to multiple styles and teachers. Instead of presuming to know better than them, patiently absorb all they have to offer so that you can gradually incorporate the best they have to offer into your own toolbox. Start by learning the basics of each discipline and grow your skills from there. If you do this, you will likely gain respect, thanks both to the respect you have displayed for your teachers, and to the broad range of skills you will continue to accrue.

Not the answer you're looking for? Browse other questions tagged training boxing mixed-martial-arts muay-thai teaching or ask your own question.

26
How can I respectful​ly raise concerns about class difficulty level/teac​hing style at my club?

12
Two Muay Thai teachers teach different techniques. Who's right(est)?
13
Should I stay in a Muay Thai gym where the fighters hit without much restraint or consideration?
10
Doing MMA or a doing multiple individual martial arts, which is more effective?
7
Is Peek-a-boo Boxing bad for the lower back?
6
Chess Boxing - Wondering how I would do / how I'd get into it
4
Muay Thai: Punching Left Jab, rotate body and hips?
3
Muay Thai, how to Parry Teep Kick in a Safe way
3
Muay Thai Front Teep Kick: Position and Body Angles
1
Muay Thai Boxing: Sparring against Opposite Gender Manner/Etiquette