Does anyone know all the different basic type of Sprawl variations and when to use each type? Is one of them used for a Single leg takedown and another is double leg takedown in images below? We could write a whole essay about this, just wanted to know the basics and its general purpose. 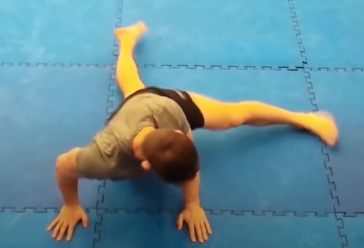 I am far from a subject-matter expert, as I've largely done striking martial arts, and my current art (Capoeira) avoids prolonged grappling for style and tradition reasons (TL;DR, it's considered messy, doesn't tend to go with the music, and isn't terribly clever most of the time), but this page does a pretty decent job of breaking down the three major sprawl types I've seen used.

To me, the first image shows square sprawls, although Ramsey currently has his hips lower, while the second one shows a single-leg sprawl.

Not the answer you're looking for? Browse other questions tagged training mixed-martial-arts grappling jujutsu wrestling or ask your own question.

7
Established "curriculum" for MMA?
7
Supplementary Asian arts for Modern Medieval Armored Combat
11
What are good solutions for MMA training with half long hair?
5
Mixing different martial arts?
8
Which types of throws can lift the heaviest weight (hip throws, shoulder throws, etc.)?
7
Is the head-outside single leg takedown relevant in MMA?
5
Are there MMA rules that prohibits reactions which would render grappling unusable in a real world scenario?
5
How did Kayla Harrison supplement her Judo for grappling & ground fighting in MMA?
3
Types of neck throws?