How can you — on the ground lying on your back — defend against an enemy on top trying to knife into your chest?

Lieutenant Commander Mark Prentice on the bottom gets knived many times by Chief Petty Officer Downard on top. How could've Prentice protected himself, beaten Downard, and come out on top? 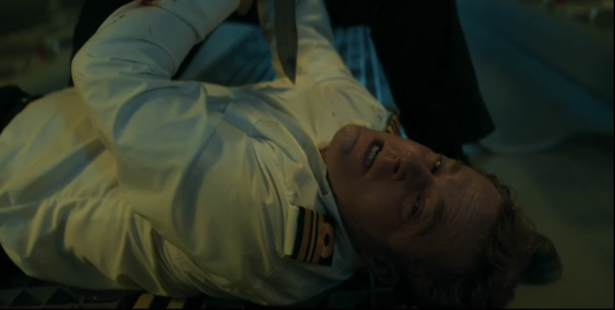 In this situation, Downard is kneeling beside Prentice, not even putting weight on his body. Prentice should try to rotate his body to his right, scoot his body away from Downard and push Downard's hand to the right, deflecting the thrust of the knife past him (in BJJ, this is known as "shrimping" or "elbow-knee escape"); then, either get up and run away, or keep control of the knife hand, and get his legs between himself and Downard's body, maybe securing an armbar (juji-gatame, in judo terminology) on the arm holding the knife.

Obviously, all that is easier said than done in real life. As long as the attacker doesn't bother to control the defender's body and just pushes down, it can probably be pulled off, but as soon as the attacker does something different, all bets are off. When someone attacks you with a knife, expect to get hurt or die.

3
How do you turn a knife attack back onto the attacker?
2
How to defeat a stronger opponent, on top of you, trying to knife into your chest?