Boxing: Different ways to Block Cover Up, Wrists pointed towards you or to the Side

I see there are different ways to cover up/block in boxing. One strategy is wrist pointing towards you, another method is wrist pointing to the sides. Both ways allow athlete vision in pictures below. So what is the various reasons for using these methods? I see different boxing coaches teach differently, etc. Both strategies are used when opponent is doing jab-straights and hooks. 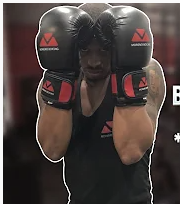 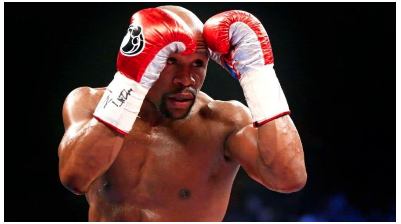 In the first pic, the forearms are vertical and the palms are held inward. Vision is severely impaired. Punches are made more difficult. The guard is relatively tight. In the second pic, the forearms are less than vertical, resulting in a more open torso, but vision is slightly better. Mayweather may be trying to tempt his opponent into a body shot in order to counter (likely to the head), or he is merely shifting his guard around in order to make things more difficult for his opponent.

Both these 'high guard' postures impair your vision a great deal and make you very vulnerable to hooks that reach around the gloves or even punch through the gloves. The first photo you provide is an example of a position especially vulnerable to hooks, because it compounds open sides of the head with a (relative) blindness to precisely the attacks that would be used to exploit these openings.

The high guard also keeps you more square to your opponent, which almost doubles the amount of available strikes they can launch at any time.

The elbows-forward position of the high guard can be used to block body punches and head punches simultaneously, but only if you curl your body slightly forward, which places your head closer to your opponent.

Regardless of your style, it will occasionally likely become necessary to employ such a posture; when you are under a barrage of blows and feel unable to safely counter and/or when your are fatigued and unable to keep out of range.

Compensation for the blindness caused by high guards is achieved by a kind of tactile awareness. For example, upon feeling a hook crash into their right glove, a fighter might deduce - on the basis of their opponent's fighting habits - that the next blow is likely to be another hook, but to the opposite side. So, upon feeling the impact of the first punch, the fighter might immediately counter with a straight right or right hook, hoping that they have guessed right and that their opponent's left side is momentarily open. This approach requires considerable experience and poise and results in a fighter sustaining a lot of fatiguing head impact, even though the punches are landing on the gloves. It is also high risk, as there is a high likelihood that you will fail to correctly predict your opponent's follow-up strike. If you place any emphasis on the goal of "hitting without getting hit", it's not a very attractive style of boxing. It's more about wearing punches than eluding them.

This being said, a high guard is often vital if your reach is significantly less than that of your opponent - even if you have excellent body and head movement - as you will need to take some punishment in an attempt to close range. This boxing defence breakdown is a fairly good analysis of the closed guard, although it neglects much information about countering. I couldn't find a good video on Youtube about countering from the high guard, which is a vital skill to learn if you are to dissuade your opponent from all-out attack.

High guard can also be effective for a high-volume puncher who maintains initiative for most of the fight and sustains less punches in return.

Here is an analysis of Canelo Alvarez's strategy against an opponent relying on a high guard.

Whilst Mayweather is one of the boxers in the photos you provide, he typically employed a 'Philly Shell' stance and would only resort to such a position when he was trying to tempt an opponent into a certain type of attack (such as a body shot or a hook), and thus be prepared to immediately counter, or for the other reasons described earlier.

Although some confuse the two, don't confuse the high guard position in your photos with Tyson's 'peekaboo' style, in which the gloves are held below the eyes, affording greater peripheral vision, and which also relies on constant head and foot movement (and therefore, better than average fitness) to be viable.

Pros and cons of a high guard

Not the answer you're looking for? Browse other questions tagged technique mixed-martial-arts boxing muay-thai or ask your own question.

6
What are the different ways of controlling the feet during a jab punch in boxing?
6
In MMA, should you try to block punches with your glove in the same way you could in Muay Thai?