How to defend a shoulder charge?

This question is similar to this one but looks at a more specific scenario. This question also refers to an everyday/street situation, not a controlled bout, and assumes the opponent is bigger/heavier. 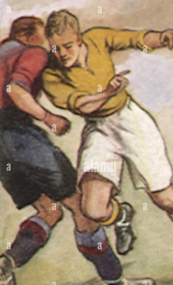 Firstly, this is an example of a shoulder charge, it's called the same in soccer and a "shoulder check" in hockey (except you're on skates of course). Essentially running towards an opponent but instead of tackling/doing a take down you put your weight into your shoulder and charge through them hoping to knock them over with your superior momentum.

The two main ways I would imagine this can come about is (a) someone takes a berserker running start at you from across the room, or (b) it is done from face to face or a few steps away, as more of a "shoulder shove".

Shoulder charging someone is a very basic way to attack. The attacker is committing their weight forward, and simply not being there is probably sufficient for them to put themselves on the ground. Move your feet and get out of the way.

Going to attempt an answer to try to get this one moving. Happy to get thoughts on any of these strategies:

A quick step to your attackers exposed side, followed by a hook punch or knee to the groin can an effective counter-attack.

If a counter-attack is not desired, a side step followed by an ankle trip will often land them on the ground, which may give you an opportunity to evade.

From the perspective of my current style, Capoeira, this is typically either an entrance into tesoura, or an attempt to push you back to get the distance for one of the straight kicks (with the added benefit that the reflex for a lot of people when pushed back is to surge back forwards, which throws them into your kick). The preliminary defense is to not be there, typically by stepping to the outside and shoving their shoulder away from you. If you can't evade, the next best movement is usually to try to get above the charge so that your weight is bearing down on them, forcing them to work harder, and to try to "float" over the push so that you're not off-balance when you land.

If you can't do that, and you're knocked off balance, the general idea is to fall on your own terms as much as you can, and it's largely the usual advice of making sure you don't try to catch yourself on your fingers, no straight arms, and the like. Because of how Capoeira is "scored" (we don't have unified sporting rules across the style, but people will judge you), you'll want to avoid letting your torso, buttocks, or knees touch the ground, and if you are able to land gracefully and immediately transition into movement, people might not even consider you as having been taken down. For many people, being able to redirect the falling movement into a cartwheel or other floreio is even better than being forced to a ground position, which might further limit your movement, and has a stronger feeling that you've been knocked down.

As to how this applies to self-defense (sorry, kind of got down in the weeds), the key takeaways is that you want to evade, probably to the outside, and redirect the movement. If you can't evade, try to keep control and avoid getting knocked to the ground. If you can't avoid getting knocked to the ground, control your fall and try to immediately transition into movement. You'll probably want something that gets you to your feet quickly in case your attacker has some buddies around, or decides to start dropping chairs on you. Turtling on the ground works alright works alright with a single attacker who's committed to getting in close to you, but can leave you vulnerable with multiple attackers, or with someone willing to hit from a distance.

Not the answer you're looking for? Browse other questions tagged self-defense streetfight strength weight strategy or ask your own question.

20
Self-defense against a bigger charging opponent

8
How to defend yourself when you are outclassed?
4
How do you escape from a front head lock?
0
How to defend from Karambit attack
2
How dangerous are long thumb nails
1
How to defend against fish-hooking?
5
"Watch the shoulder"?
6
How to counter a rear bear hug?
1
Is Ghost Kick applicable in street fight and how can we defend and anticipate it