I am training in MMA stance with Muay Thai and Jiu Jitsu. What happens if I face opponent using a Karate stance? Should I go for double leg takedown or leg roundhouse kick? What are some options? How come Karate stance is not really used in MMA, is there an exposed weakness that I can use against them? 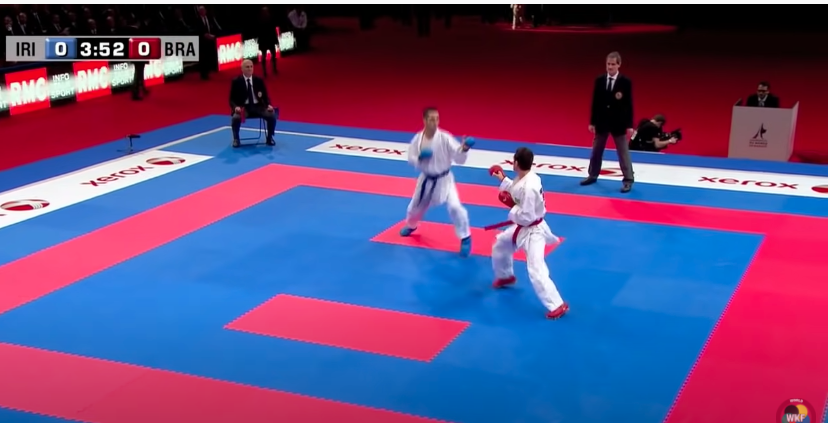 Even in karate or Taekwondo sparring where this stance is most often used, they teach that the way you deal with a powerful opponent is not to come in range of his kicks and punches. That means you should circle around him towards his outside. Don't move towards his inside.

Once you have circled around to his outside, you should attempt to get in close to him. Karate and especially Taekwondo people do not deal well with anyone coming in close to them. They simply don't have control over that close-in range. Usually. It's not where they want to be. So they will try to keep you from circling around to the outside by pivoting and squaring up with you again. And they will step away if you're attempting to get close.

So to prevent him from squaring up with you again and to prevent evasion and getting more distance, you will need to immobilize him. One way you do that is by grabbing his leading arm. Another way is by forcing him to deal with some strikes. The strikes you do would be a distraction while you slip in close. Another way would be to back him into a corner.

You can take advantage of his movement, too. If he likes to kick, that will temporarily glue him to his current location. Look for patterns. When you know he's about to kick again, rush in. That's your time window where he can't easily adjust to what you're doing.

I assume being in MMA, you know what to do once you're in close.

This is a stance for point fighting not for full contact. They can pull off very fast attacks but usually don't hit hard from this position (because doing so is against the rules in this style).

You might have trouble reaching the back leg for a double leg takedown. However their stance is very wide so a single leg takedown should be easy.

Otherwise just hit them. I don't mean to be facetious but this stance isn't that special.

I also sometimes find that as their rule set often doesn't allow points for jabs to the body too so I have found when sparing with karateka's that they sometime don't defend well against this.

Basically most of your favourite tricks should work fine. Don't let their odd stance put you off.

Not the answer you're looking for? Browse other questions tagged technique karate mixed-martial-arts muay-thai or ask your own question.

3
Which techniques are available in Muay Thai for blocking/avoiding a high roundhouse kick to the head?
10
What to do with a grabbed leg?
4
How to counter a powerful Left Roundhouse Kick from a Southpaw in MT?
6
How to beat a Kickboxer with a Bruce-Lee-type stance and a Taekwondo/Karate background?
8
What sort of throws are illegal in Muay Thai and why?
4
Is a sprawl or knee generally more effective against takedowns?
3
Muay Thai Front Teep Kick: Position and Body Angles
1
Muay Thai Boxing: Sparring against Opposite Gender Manner/Etiquette
3
Muay Thai Roundhouse Kick: Using Kick Shields vs Thai Pads, different technique?
2
Muay Thai Roundhouse kick, what angle to bring out knee and leg