Is it dangerous to block blows from someone bigger than you?

If you were fighting someone bigger than you in a street fight (and a possibly trained thug), would it be dangerous to block it if the attacker is also stronger than you? Should you dodge instead? In the same case, is parrying safer?

In a street fight, physical size and perceived strength have little bearing.

In a famous example, a petite female MMA fighter (Polyana Viana) was mugged on the streets of Rio by a male. After she was done with him, he looked like a truck hit him and required medical help... she did not: 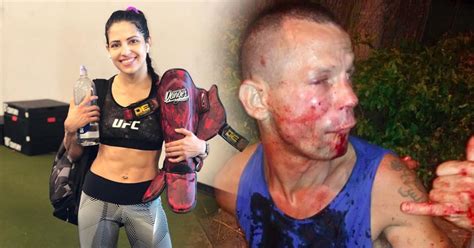 I've seen people of all shapes and sizes involved in street fights with others. The only consistency I've seen in outcome is how hard the really big guys hit the ground.

Whenever possible, it is best to avoid street fighting. You never know the training of your opponent, or who has a weapon. And if law enforcement eventually arrives, they often arrest both parties. But if they only arrest one of the fighters, it's often the victor, regardless of who started it.

Really it depends what you call a block.

If you use 'cover blocking' from boxing in a street fight I would say this is dangerous because you are probably not wearing gloves. You will have to adapt these to make them work against anyone without damaging your fingers. You will probably adapt them into something resembling karate/taekwondo before they work well with bare hands.

If you are using karate/taekwondo blocks (uke) you will not pull them off against a much physically stronger attacker. I say this because it requires actually pushing the arm out of the way.

If you train in Shorinji kempo we teach to dodge and parry (uke again) instead.

This does work against a stronger attacker (I weigh about 100kg and can use these sparing with a 140 kg opponent) but you have to carefully control the distance to allow yourself space to read the attack. This is because you intend to move your entire body (and possibly legs too) in the time your opponent uses to make their attack. If they are too close you won't have time to do this.

If you are training a Wing Chun or similar style (or Shorinji Kempo at 2nd dan level or above) you may manage to unbalance your opponent using your deflection, but this is really hard to do and gets harder the more training your opponent has.

At this point you are crossing the line from striking to light grappling but it's still a kind of block in a way.

If your blocks of this kind are good enough you can actually prevent the second attack in a combination from coming by bringing your attacker to kuzushi with the block from the first attack. I can't pull this off as yet though, even after 10 years of training but I am beginning to learn this method.

Bottom line is, blocking is not an easy thing to do. It takes time to learn and you have to think carefully about what kind of strategy you are using too. Also you have to train blocks without gloves if that is how you intend to defend yourself.

You are never going to know whether the person is stronger than you until you've seen or felt the amount of damage they can do. Bigger guys exist that can't strike if their life depended on it, and there's also smaller guys who will surprise you. It also depends on how you block. A stronger guy may be able to wear down your forearms, but block his fist with an elbow a few times and I'm pretty sure he'll be worse off pretty quickly.

Dodging will obviously avoid any damage completely but it will mean you have to be much more mobile (and may run out of steam before they do) and be mentally ahead of them. In a realistic fight it is very difficult to avoid every blow unless you take out the opponent after their first one. And if worse comes to worse, it is always better to cover up just in case then be "dodging" and blocking with your face. Even if it was a baseball bat or knife coming at you, you would probably want to dodge, but I would certainly use my hands to protect the more vital parts of my body.

Not the answer you're looking for? Browse other questions tagged striking streetfight blocking parry or ask your own question.

10
How different is Olympic Taekwondo from traditional Taekwondo? And how similar are Olympic Taekwondo and Karate?
7
Arm Toughening Without Losing Sensitivity
4
How do you escape from a front head lock?
0
Is accuracy less important in street and Krav Maga?
3
Practice focus at home
5
Defending legs with a sword
5
How is Tai Chi different as a martial art in terms of self defense/combat?
4
How to defend a shoulder charge?