What is the proper name of the shin conditioning sticks used in Muay Thai? I am trying to find a stick for this very purpose to harden the legs.

I searched for "shin condition stick" on amazon, no results. I am NOT looking for product recommendation, but rather proper term, so I can search by the name. 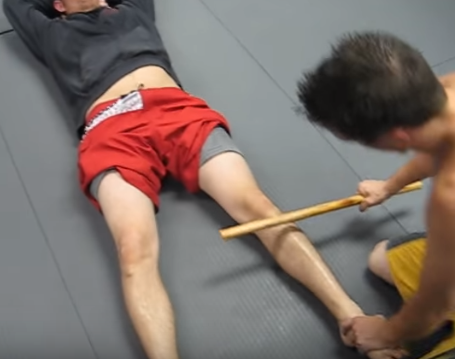 I will state first that I have no direct experience with shin conditioning, Muay Thai or otherwise. However, I tried to do some research on this and ran into some interesting information.

First of all, a lot of shin conditioning doesn't really work. Bone remodeling works by osteoclasts breaking down old bone tissue and osteoblasts rebuilding it in accordance to Wolff's Law. Bone is rebuilt according to stress, the force exerted on the bone, rather than strain, how much they bend or buckle under the stress. And, unlike common folk science, broken bones do not heal back stronger overall. Early repairs create a callus that is stronger, but it goes away relatively fast, and the resulting microfractures actually create a weaker structure because the osteoblasts have to work to both do regular repair, and repair the break. If you're constantly damaging the bone, the osteoblasts don't get a chance to "catch up" and the resulting repairs will be less strong than the original bone. The good news is that bones under compression do tend to regrow thicker. Unfortunately, more directional forces, such as time spent "conditioning" the bone via striking tend to create a more unbalanced structure, which weakens the bone for regular movement such as foot movement during the fight. It will deaden the nerve cells, which means you're less likely to feel hurt, but it doesn't do much to improve the actual bone strength (and may actually make you more likely to injure yourself because you don't feel the warning of pain). Plus, because the bones are constantly rebuilding according to current stresses, any conditioning to the shins against blows is likely to be overcome by the more regular compressive stress from walking around. Overall, you're better off training compressive forces via gradual compressive loads such as weight-training and high-impact bodyweight stress such as sprinting. It's about using your muscles to create the strain so that both the bones and muscles grow in accord to create a safe structure. Lastly, as a caveat, after the age of 30, bone reconstruction drops off sharply, so the odds are low that you will be able to build greater bone mass. The best you can do is regular exercise to maintain your bone density.

More directly answering the question, there does not seem to be a generally agreed upon name for the stick, with all that is required is a stick with a smooth surface. This fellow used (and linked) a kendo stick (side note, it sounds like he may have been focusing as much on striking the shins as rolling).

I believe they're called "Kali" But I could be mistaken. I heard Bamboo is often used, as well. But really I'm sure it's just whatever's practical. Just walk outside and grab a stick and start whacking your shins lol