Street Fight Stance, which ways to rotate hands and fingers

In a street fight without gloves, which way should the hands be turned? Fingers pointing towards you or fingers pointing outwards? I just noticed if the fingers point inwards, they can jab/poke eye accidentally. Just learned this while doing light sparring with friend.

In Boxing and Muay thai (different from street fighters), it doesn't matter with varied styles, as there are gloves, so this issue does not occur as much. I noticed in Krav Maga its more outwards 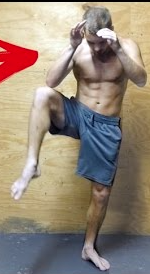 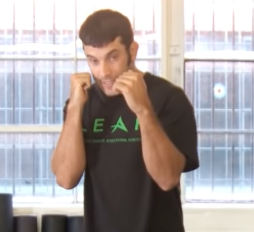 Both stances are fine for bare knuckles fighting. It mostly just depends on your own personal style and what you're trying to do.

The main thing you'll notice from the two pictures included in the question is that one has elbows in, while the other has elbows out. When your elbows are in, it's harder to face hands towards your opponent. But that's a superficial reason for why that happens.

The first picture is obviously a Muay Thai pose. The second is a boxing pose. Muay Thai rules allow for clinching around the back of your opponent's neck, while boxing rules do not allow clinching at all. So in boxing, there's no advantage to keeping hands open and ready to grab an opponent, because you're not allowed to do that. But it's fine in Muay Thai.

Furthermore, Muay Thai allows for kicks and elbows, but boxing does not. For Muay Thai, having arms out like that allows for heavy round kicks and elbow strikes. For kicking, it improves mobility, speed, power, and balance. If his elbows were in tight like the boxer's pose, then he would find it's much more awkward throwing the round kick. He might lose his balance. He might find it's hard to raise his leg up high.

But perhaps most importantly, if a Muay Thai guy's elbows are in, when he does launch the round kick, a big open area on the side of his head would be exposed due to his arms being in and his body turning to the side now. By keeping his arms out like that, he can use them to guard against other strikes while he's turning to complete the round kick.

Elbow strikes are also something Muay Thai people are allowed to do. And having your elbows slightly out instead of tucked in makes it a lot easier to launch elbows. That's something boxers don't have in their arsenal.

So now the picture is a bit more clear. You keep your elbows in if you've got a boxing style. It's defensive by minimizing your body's targets yet allows you to get quick shots off and keep moving. And by letting your arms stay in like that, you're conserving energy (useful for boxing, less important for street fights).

The down-side of the boxing pose in street fights is that it requires quick footwork to avoid someone rushing in and grabbing you. Grabbing isn't allowed in boxing rules, so this might surprise a boxer in a street fight. The more upright stance and lack of any kicks means it invites people in closer where they might be able to grab and tackle.

Whereas the Muay Thai pose is relatively less mobile and more vulnerable to close range punches. The clinch is there, though, for when an opponent gets too close.

So overall, I'd say this really depends on your own style, what you're good at, and how well you've trained for street fighting scenarios. There are many videos showing pure boxers doing astoundingly well in street fights, even against multiple attackers, because they very quickly move around their opponents and land straight or over-hand rights to their opponent's jaws, knocking them out really quickly. The key to their success is their ability to move fast.

And there are great examples of Muay Thai people in street fights, just chopping down their opponents at their legs or landing round kicks to their heads. I would imagine having a decent clinch and being able to resist getting tackled helps a lot, too. As would elbow and knee strikes in the clinch.

As for accidentally poking yourself in the eye with your own fingers because they're turned inward, that probably happened at just the wrong moment and may not be something repeatable. Hopefully. It is less of a concern if you just make sure to keep your fists tight or at least not too loose. It's common to keep them loose and then tighten them as you're striking. Just don't keep them open or allow them to open. And, as I said, always be on the move. Never stay still. That way don't give them a chance to startle you with a strike and then cause that eye poke to happen by accident.

Not the answer you're looking for? Browse other questions tagged technique self-defense mixed-martial-arts streetfight or ask your own question.