It feels like doing Muay Thai roundhouse kicks on Kickshields and Heavy Bags is different than doing on Muay Thai Pads.

Kickshields and Heavy Bags are vertical perpendicular against the body. Muay Thai Pads are held at 45 degrees.

This creates a different level of contact, with slighty different technique. Kickshield seems like it follows opponent body contour better, and feels more like a roundhouse. Thai Pads feels like front kick with 45 deg variation. Are they supposed to be different kicks with different angles, or should I keep the exact same technique? 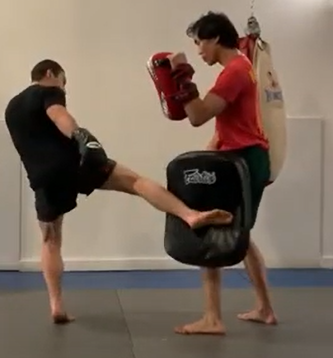 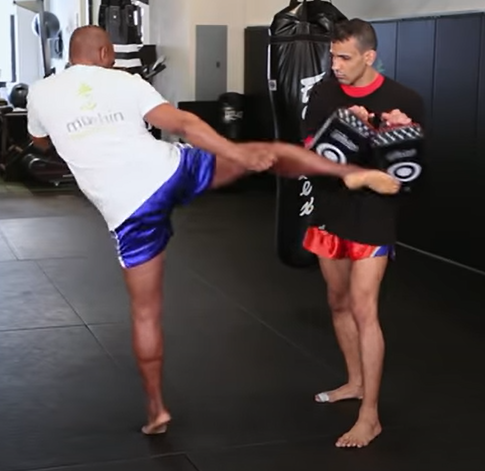 You should generally tweak your technique in response to the target at which you are aiming.

The greatest force upon impact will typically be achieved by striking perpendicular to the strike zone, which is why different pads are often held in positions which facilitate this.

But of course there is nothing to prevent Muay Thai pads being held vertically and high. The consequence of this however will be that the striker's leg will be more prone to travel up along and off the pad (unless the striker is very flexible/mobile and can achieve horizontal impact at height). This slippage can also endanger the holder of the pads. They can also be held at an upwards angle to accommodate overhead punches, axe-kicks, crescent kicks and high, downwards roundhouses.

Similarly, there is also nothing to prevent a kick shield from being held at an upwards angle (such as on the thigh above a bent knee) which is in most circumstances safer and accommodates downward roundhouses well, ie: it provides a perpendicular target. A kick shield can also be held at downwards angles to allow for upwards front kicks and roundhouses, and vertically to cater to strikes which travel in the horizontal plane.

Your training will ideally replicate your combat strike techniques as closely as possible (an exception being when you are training purely for anaerobic/aerobic endurance). Given that in a fight, you will routinely land upon parts of your opponent's body which are not ideally positioned, your pad work should reflect this.

Remember too that pad work often ignores the 'offensive defence' of knee-checks and elbow drops, which can quickly rob you of - or dissuade you from using - your go-to techniques. This is why training without pads is also essential; so that you become accustomed to negotiating those parts of your opponent's body which can inflict harm.

In short, the pads you are using should not dictate technique. You should adapt your pad use to the techniques you wish to train.

Not the answer you're looking for? Browse other questions tagged technique mixed-martial-arts muay-thai kickboxing or ask your own question.

10
Holding Thai pads safely
13
Should I stay in a Muay Thai gym where the fighters hit without much restraint or consideration?
15
Daily Tae Kwon Do routine to improve kicks
6
How to beat a Kickboxer with a Bruce-Lee-type stance and a Taekwondo/Karate background?
2
Lifting elbows when rotation fists for jab/cross
3
Muay Thai Roundhouse kick: Rotate in stability without friction
2
Muay Thai: Roundhouse Kick Rotate in Practice compared to Actual Matches
2
Muay Thai Roundhouse kick, what angle to bring out knee and leg