Muay Thai Roundhouse kick, what angle to bring out knee and leg

When doing a roundhouse kick, is there a rule for what angle the knee should come out at ? My coach says to bring the knee over at straight vertical angle 0 deg, and rotate the leg over while you extend.

In this angle below, the knee is out at a 45 degree right, while he extends the leg. My coach says not to do this. Is there a general rule for kicking? Or is each variation okay? green line below for reference

Another angle question, last question (Muay Thai Roundhouse Kick: Using Kick Shields vs Thai Pads, different technique?) was about final Rotation of leg. This is how about to bring it out initially. 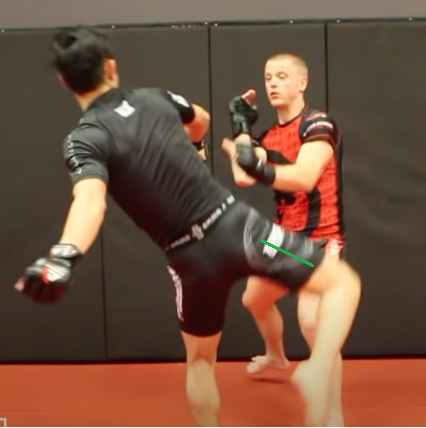 This is a good video resource from Damien Trainor after research: (feel free to add more answers)

Both kicks start at the same time, but the key differences to notice are, the angle of the knee as it starts and which kick strikes first. ⁣⁣⁣ ⁣⁣⁣ Even though it’s called a roundhouse kick it’s important to remember when throwing it that you don’t want to throw it too round. By doing this you’re telegraphing what you’re doing, it takes too long to get to the target and you’re losing power.⁣⁣⁣ ⁣⁣⁣ Think of a circle, you want to get from one side to other as quick as possible, fastest way to do that that is straight through the middle. Same applies for the kick, your want the kick go at a relatively straight angle and then turn your hip over at the last second. ⁣⁣⁣ ⁣⁣⁣ Key points when throwing the kick are pivot the standing foot, throw the leg direct to the target, turn the hip and shoulder over, guard, make contact with your shin. ⁣⁣⁣ ⁣⁣⁣ Just remember EVERY technique has a textbook way of throwing it.... however, fighting can be unpredictable. So with that in mind, there will be times when you have to adapt to the situation at hand in order to land something. In other words at some point you may have to swing wide to get past someone’s defence. That adaptation comes from experience....someone left a comment not too long back which I thought was great “learn the rules well before you break them”. ⁣⁣⁣

Not the answer you're looking for? Browse other questions tagged technique mixed-martial-arts muay-thai kicking or ask your own question.