Karate Side Kick in Muay Thai

What are the consequences if I did this jumping side kick in Muay thai? Would it work, or would a professional Muay Thai opponent do a big counter from that? See this link from Jeff Chan channel. 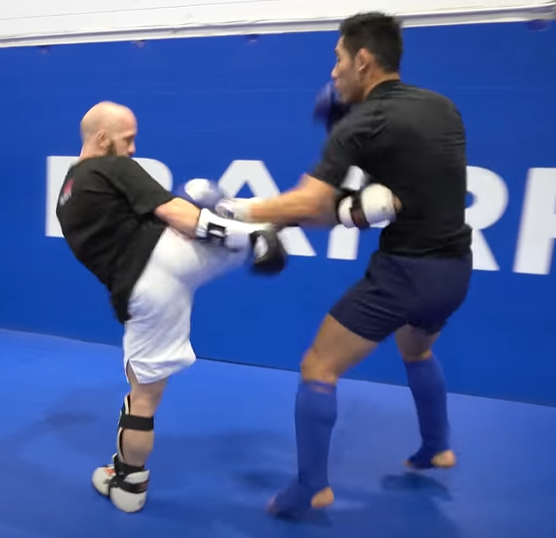 Side kicks are more rare in Muay Thai fights, that is for sure.

Everything can work. But it depends on how good the kicker is at that technique and how good the defender is with it.

Just on a side note, that's not a jumping side kick seen in the video link. In Taekwondo, that's called a hop-side kick. Hopping means you're shuffling towards your opponent and execute the kick with one foot still on the ground. Whereas, jumping means both legs are off the ground when the kick is executed, and you don't travel across the floor at all (the direction is straight up). There's also jumping-hopping (more commonly called "flying") which involves moving towards an opponent while jumping. I go over this more here:

How does one train for a spinning reverse kick?

Muay Thai has side kicks, but they don't often encounter them in sparring due to a number of reasons. First, Muay Thai's stance is more squared forward and more upright than martial arts like Taekwondo that utilize this kick more often. That makes it awkward to perform in Muay Thai. They have to lower their body, widen their stance, and turn to the side. It takes time to do that, and that's a problem. But that side-facing stance is also something that just feels wrong to a lot of Muay Thai people, perhaps because it makes you more vulnerable close in.

Which brings me to the next issue: The preferred distance in Thai boxing is another reason why you don't see a lot of hopping side kicks. Hopping requires a good amount of distance. And long distance techniques are not generally preferred in Muay Thai. You might see it used more often if someone is knocked backwards, quickly recovers, and then uses the hop to get back to the center of the ring more quickly.

Side kicks can be very powerful. They're Taekwondo's most powerful kick. Done to the abdomen, it can knock an opponent's wind out and can pick them up and send them backwards. It can break ribs. Hitting with the blade edge of the foot or the heel instead of the entire foot can also create a more damaging impact.

The biggest down-side of the side kick is that it takes time to pick that foot up, turn the hip over, snap it out, pull it back in, turn the hip back, and then put it back down. Meanwhile, the longer your leg is out there with your hip turned over, the more likely it is your opponent will either grab it or use it as an opportunity to unbalance you and knock you down. And if your opponent steps to your outside while you're doing the side kick, you have no defenses available to your head on that side, making you susceptible to elbow strikes and punches to your head. All of this means you're more vulnerable.

So when using the side kick against a Thai boxer, you really have to have excellent technique. It needs to be super fast, and you need to have enough experience with it that you have automatic reflexes for dealing with everything that can go wrong.

A Taekwondo black belt might be able to pull it off, because they practice that kick to a high degree. But I don't think Muay Thai puts enough time into practicing it. And that's probably why you don't see too many Muay Thai practitioners doing it in practice. It's too slow and too risky. Not being good at it also means the reward is low, too, because it's not going to be nearly as damaging as, say, a round kick to the legs of their opponents.

So if you wanted to take this kick and really make it your secret weapon in Muay Thai, you probably need to do some Taekwondo as supplemental training and bring that into your Muay Thai practice. Maybe get some private lessons with a TKD instructor who can work with you on it over a year or two. They'll first go over the proper technique which they will continue to drill into you throughout the entire time you're there. A lot of their training will involve punching bags and those blue blocking shields. Punching bags are for focus and power. Whereas your instructor will move the blue blocking shield around as you're kicking, making your kicks faster and more accurate, and increasing your stamina. Repeating the kick as fast as you can for 30 seconds each leg against the blue blocking shield is another Taekwondo favorite training technique, which results in much faster kicks. They then work on drilling different scenarios (you vs. the instructor). Finally, they will spend time on sparring with it. You'll need to learn how to use it against a moving, resisting opponent. Training should be 2-3 times a week, with two days to recover between sessions.

Not the answer you're looking for? Browse other questions tagged technique karate mixed-martial-arts muay-thai kicking or ask your own question.

10
How does one train for a spinning reverse kick?