In boxing, they say on the Hook punches 5-6, you are not supposed to extend your arm (like cross jab). You keep your arm steady-static, and rotate the from the hips.

Is this same principle true for the uppercut? 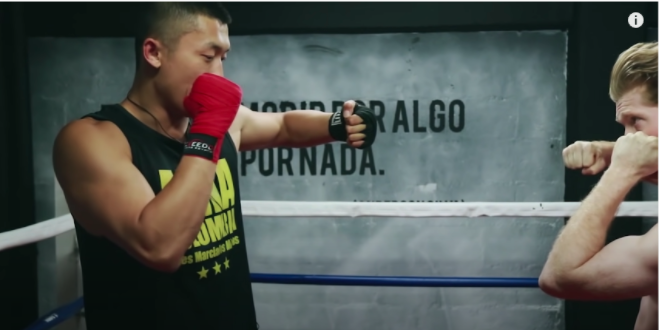 If you rely solely upon hip rotation for power when hooking or uppercutting, you will be punching with far less power than you might with better technique.

Even when performing relatively strict, orthodox, compact hooks, the momentum generated by the hips and legs is substantially augmented by an almost imperceptible quasi-slingshot movement of the arm and fist which is generated by the back, chest, shoulder and arm.

The biomechanics are tricky to describe without footage, but here goes:

After the foot and knee pivot, the hip-turn commences, which leads into the upper-body mechanics of the punch.

As the torso rotates, let your punching-side shoulder open up (very slightly) from your chest as you raise your forearm towards the horizontal. It should feel as though you are letting your shoulder lag slightly behind your pectoral as you twist (Note: the extent to which you do this determines the extent to which you leave yourself momentarily open. Don't let your fist float out and away from your body).

As the moment of impact nears and as the torso rotation slows, use your back and shoulder to 'whip' your arm around, driving the fist into the target as the elbow reaches its full height. It might take a little while to get the timing right, but the increase in power is well worth it.

As for the uppercut, note the following important differences:

Your shoulder-line will often dip towards your punching side, as much as 45 degrees (This dip is often useful when slipping and countering an opponent's jab; punching up and under their extended jabbing arm).

Power comes from driving up from your feet (your rear foot in particular), through your legs and into your rotating hips.

A key to maintaining good, compact, efficient technique here is to imagine the top of your punching side hip is driving your elbow forward. This has the advantage of training you to keep your elbow in tight, which in turn keeps your technique direct and efficient and maintains defensive integrity.

As the hips become square, the elbow leaves the body and continues forward and up. It is at this moment that technique similar to the 'whipping' or 'slingshot' described for the hook can be achieved, improving power.

REMEMBER: When performing both punches, maintain guard with your opposite hand and don't try to generate power by punching in unnecessarily big arcs which telegraph your efforts and leave you more open to counters. When you do this, your punches become more recognisable, slower, and less defensively responsible. It is okay to wind up more for power shots when circumstances permit it, as long as you realise the risks of doing so.

Try it on a bag and see how you go. Avoid tensing your body until the moment of impact. Aim for compact efficiency of effort. The motions I am describing are very subtle and almost impossible to detect in footage of good fighters, but believe me, they are there.

As a point of comparison, try hitting the bag with no arm movement at all; using only the motion of your hips. It will likely feel a lot weaker.

A lot of the footage you will find of good boxers performing uppercuts in bouts shows fighters 'winding up' and punching a lot more wildly than I describe. This is often because they utilise the uppercut at times when they are dominating their opponent; at moments in which their opponents have retreated into a defensive posture and stopped attacking. Learn the strict version first and, as usual, you can break the rules later as appropriate.

With this in mind, look at some of your favourite fighters doing bag and mitt work. Click here for Golovkin demonstrating some nice 'easy' hooks and uppercuts.

And here for Lomachenko on the heavy bag.

Not the answer you're looking for? Browse other questions tagged technique boxing muay-thai punching or ask your own question.

6
What are the different ways of controlling the feet during a jab punch in boxing?
8
In which situations in Muay Thai is the 'super man' punch used and why is it more effective than the normal 'cross punch'?
6
Is the way US military academies teach boxing atypical with respect to concussions?
8
Has there ever been a boxer who fought like Prince Naseem Hamed?
3
What are the six ways to keep a left jab from landing?
7
Is Peek-a-boo Boxing bad for the lower back?
5
I still look like a complete "noob" during drills with long combos I've never practiced before hand
2
Is it possible to compile a list of discrete/distinct striking techniques (hands/arms)?
1
Boxing, how much to rotate body on Cross Punch?
3
Boxing Corkscrew Punch: Is it the default punch?