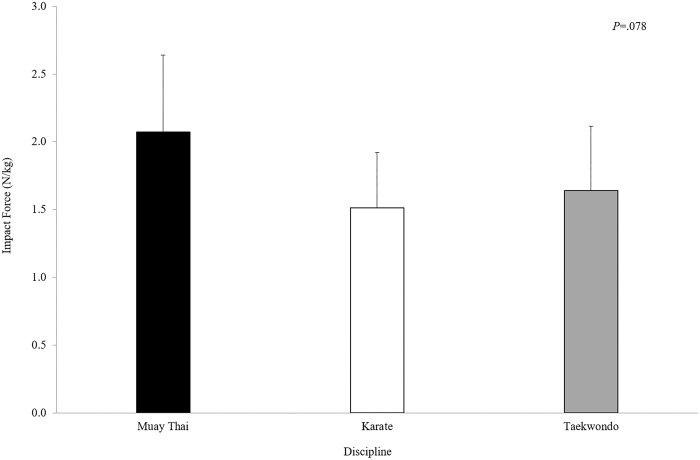 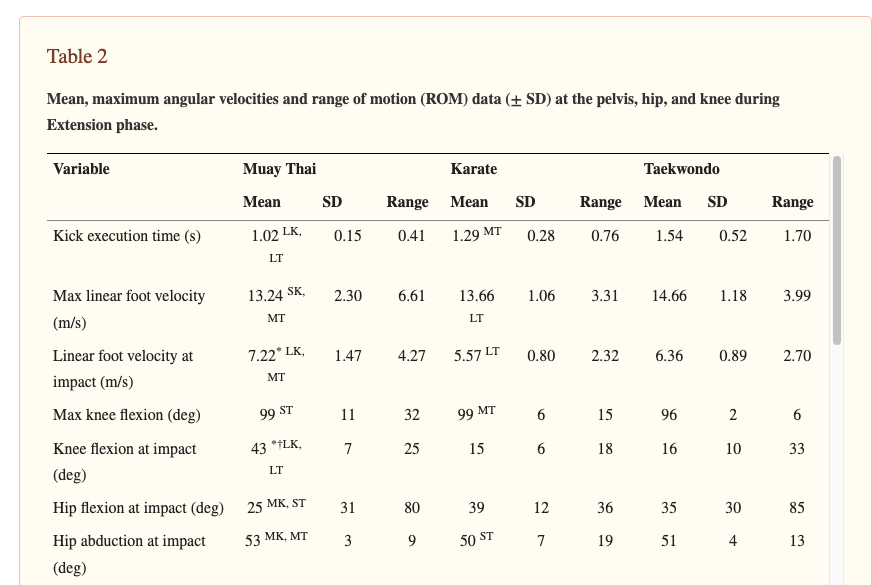 Thorough analysis of the study you provide would take considerable knowledge and a very long answer, but there a some factors evident in the article which bear mentioning:

Eight participants for each style is a very small selection. Just think of the intra-belt skill range that (likely) exists within your own training facility. There are black belts who terrify heavy bags and black belts who tickle them.

Very little information is provided as to how the participants were selected. The study doesn't provide much information on participants other than their belt level, age, height, mass and training time (in years). Training time can be very deceptive. How many sessions per week? How long per session? How intense are the sessions? How well practiced are the techniques? Many variables exist, which is why a study based upon such a tiny sample size should be treated with skepticism.

The study states, "The Muay Thai group had significantly less body mass than the Taekwondo group, but not compared to the Karate group".

Even if we pretend for a moment that all other variables were equal, a higher power reading for the Muay Thai participants (per kilogram of athlete weight) makes perfect sense given that light adult athletes are typically more powerful per kilogram than heavy adult athletes. This can be verified by looking at power measurement stats across sports and is exemplified by gymnasts who are usually small and compact, by most elite climbers who are very light and very lean, and by lightweight powerlifters, who typically lift far more weight per kilogram of body mass when compared to their heavier counterparts.

Specificity of technique is far from guaranteed by the kind of uniform an athlete wears. For all we know, some of the karate practitioners kicked in a style more typically associated with Muay Thai and vice versa. Technique varies not only between style, but between gym and between athlete.

A much more carefully controlled study with a much higher number of participants is required before any significant conclusions can be drawn about differences between styles. Some of the other important factors are addressed during the 'Discussion' portion of the paper.

Academic analysis is interesting and can provide valuable clues as to how techniques and training methods compare and can be improved, but you might find that it is at least as valuable to visit a range of reputable gyms and to casually assess techniques of various styles by observing and/or training with skilled athletes in each discipline (poor practitioners can also provide clues as to what to avoid).

Muay Thai may well prove to offer the strongest technique overall, but this means very little in relation to what you can achieve as a Karate, Muay Thai or Tae Kwon Do (etc) practitioner. There is little inhibiting the karateka or anyone else from employing the best of Muay Thai roundhouse technique into their own roundhouse arsenal. Traditional classes may insist upon certain practices, but when sparring and fighting, a good teacher will not criticise you for utilising minor variations which prove more effective.

The most useful findings from the study might be those provided within its conclusion:

Effective roundhouse kicking performance in our population was characterized by a combination of rapid pelvic axial rotation, hip abduction, hip flexion and knee extension velocities, combined with rapid movements of the COM [Centre of Mass] towards the target. While subtle differences exist for each of these key variables across our sample, we suggest that these elements have the potential to constitute key performance indicators for this fundamental martial arts skill.

The take-away? The key characteristics of powerful roundhouse technique can be achieved regardless of whether you practice Karate, Muay Thai or Tae Kwon Do and - as is alluded to by @HuwEvans - force is but one component of an effective strike. It is sometimes prioritised at the expense of strike selection, precision and timing.

[Note: Estimates of a 200% - 400% power discrepancy between competent practitioners of (full-contact school) roundhouse 'styles' seems highly suspect. The roundhouse kick is a relatively well-defined movement (or series of movements) which is replicated across full contact styles with only moderate variance when a particular target area is specified].

Not the answer you're looking for? Browse other questions tagged technique karate muay-thai kicking or ask your own question.

5
How do I improve landing on my center line after a back kick?
5
Why don't Muay Thai fighters bounce like Karate fighters?
4
Why doesn't Muay Thai use the Karate/Taekwondo front snap kick?
3
Muay Thai Roundhouse kick: Rotate in stability without friction
0
How to respectfully disagree with Coach or Sensai?
2
Muay Thai: Roundhouse Kick Rotate in Practice compared to Actual Matches
2
Karate vs Muay Thai: Side Kick Foot Rotation
0
Muay Thai vs Kickboxing Front Kick, Same Side Hand differences
0
Karate Side Kick in Muay Thai