Which type of knife is the best to carry for self defense?

Assuming you don't have a better weapon/cannot carry a better weapon for self-defense, you cannot run, have the legal right to carry one, and must defend yourself with one; which type of knife is the best one to have in a self defense scenario?

There's obviously a lot of knife variants e.g. fixed blade vs. folding (and the various folding mechanisms available like flipper, spring-assisted opening, OTF switchblade, balisong, etc.), knife lengths, and even weird specialty knives like ones with knuckledusters/knucklebows, bowie knives, and karambits out there but out of all of them which one would be the most practical and useful self-defense knife?

The most important factor certainly is that you have to choose the weapon you are most comfortable/trained with. The best knife is worth less if there is another type and size of knife you are used to and trained with. Only as an afterthought, there are some factors to consider:

To get an impression of how this would look like, take this one: 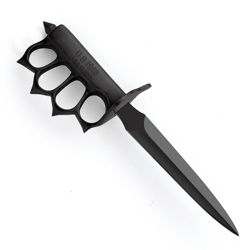 In most countries these considerations are moot since any knife that is carried for self-defense and not due to another actual or at least probable reason is considered illegal, no matter the size or fashion.

You may wonder why the successor of this knife (MK 1) in terms of military equipment (the MK 3) looked more like an ordinary knife with a guard only...this is simply due to mundane wanting to save some metal when producing millions of them, not necessarily because it was seen as better or the brass ring and pommel being superfluous.

This is something I recently asked a group of my martial arts friends. They all agree on one type of knife, which I'll get to in a second. It was just after I had a situation come up whereby some guy saw my dog pooping on his lawn, opened up the window to his house, yelled at me, jumped out, and ran right at me steaming mad.

That guy was considerably bigger than I was, and I am now too old and fragile to think that this would work out well for me if we were in a fight. I talked him down and walked away unharmed, but the incident made me realize I would be smart to get some kind of easy to carry self-defense weapon, just in case I needed it.

After discussing it with my martial arts group, I determined that the best knife to take would be something fairly small, like a fold-up utility knife. I went with the Spyderco Delica 4 Lightweight (PlainEdge style, not serrated).

There are two reasons why I would recommend a knife like this for everyday carry. First, it's very lightweight and easy to tuck into any pocket. This Spyderco model actually has a belt clip as well. And second, the blade length is good enough to use effectively in self-defense while also being small enough that it doesn't violate most laws against concealed knife lengths. Of course, you'll need to check the laws out where you live locally.

This Spyderco knife stays firmly closed but will open easily with one hand. With your thumb, you open it up part way, and then with a flick of your wrist, it snaps out. It also has a hole in the blade you can use to open it with. This can all be one fluid motion that takes merely an instant. It doesn't have spring assist, which is a really dangerous thing to have in my opinion. So there's less chance you'll hurt yourself opening it up.

The grip on the handle is very good. It won't slip out of your hand as you slash with it. It's not going to break off, either. It's very well built, not flimsy.

And as for the blade itself, the Spyderco blade is one of the sharpest I have ever seen. I once used it to cut a cardboard box, and it sliced it like it was butter. It's much sharper than my box cutter razor blade.

The point on the blade of the Spyderco is very sharp, too. I've opened it wrong a few times, that tip actually cut me. It can very easily be used to stab. But since it's only 2.9 inches long, it won't stab very far into a body. Still, it's long enough to do real damage and cause someone to back off.

As for self-defense, here's the thing I realized. You can have the best knife imaginable. It could be technically superior to that Spyderco in every way. It could be heavier and bigger. Hell, it could be a sword even. But if it's not on you when you need it, what good is it?

You need a knife that you can easily take with you anywhere. It needs to be just this thing you habitually drop in your pocket on the way out. And you shouldn't even feel it in your pocket. Something like that will always be on you.

Legally, there's also plausible deniability when it comes to a knife like this. If you're ever in court as a result of using this knife, they're going to ask why you were carrying it. Your answer here is critical. It can mean the difference between looking like a victim and looking like a blood thirsty villain. If you answer that it was for the purpose of self-defense, that could be very bad for you. Juries are biased against people who carry knives as weapons. They think only thugs would do that. And the prosecution might then argue that it was premeditated, and you always intended to get into fights and hurt people with it.

Instead, you can tell the court it's just a utility knife that you always carry just in case you need it to open a box or cut a rope or something. It's very common for people to carry utility knives. A jury will believe that. No doubt they will want to see the knife, and when they do, they'll see it's so small that it really doesn't look like something a thug would use.

As for whether or not this sort of knife is optimal for fighting, the answer is clearly no. It is definitely not as good as a 10 inch blade, or a sword for that matter. It's not optimal for anything other than portability, convenience, and concealment. But once again, I would argue those are the highest priorities when it comes to everyday carry knives. You need something you can take with you easily and habitually, something that is small and lightweight. It's legally optimal, also. The only thing better legally speaking is not having a knife at all.

All that being said, the other three main options people use for self-defense are: 1) A small handgun, 2) A small canister of pepper spray, and 3) A cane, a walking stick, or an umbrella.

Handguns are certainly more effective and have many advantages over a small, concealed knife for self-defense. But that's a whole other topic.

Pepper spray comes in small canisters that you can attach to your key chain and take anywhere. But pepper spray can get in your own eyes if you use it, and you can miss if you use it. But in general, this is a good thing to have in addition to a small knife. It's also legally easy to defend the carrying of pepper spray for self-defense in court.

Canes, walking sticks, and umbrellas aren't bad ideas, necessarily. If that fits your personality, do it. There are versions of all 3 that are specially designed for self-defense. Those versions will be made of more solid material, instead of hollowed out centers. They aren't light in weight, so they can be tedious to take with you. They're big. They're not convenient when you need that hand to be free to do other things. Some of these also have hidden knives or swords in the handle (which are usually illegal). They may have a tip that's made of pointy metal, useful for thrusting motions. But, I'll just say that this isn't a force multiplier quite as good as knives, handguns, or pepper spray. They're unlikely to stop the attacker right away. Still, better than nothing.

Those are my thoughts on this. I've been carrying the Spyderco knife with me on dog walks for years now. Thankfully, I've never needed to use it. But I know it's always there if I do. I also carry a small canister of pepper spray that's marketed for use against dogs as well ("Sabre Red Dog Spray"), just in case I need to fend off either a person or a dog. It has a convenient key chain ring connector on it which I attach to my dog's leash. Highly recommended.

54
Which martial arts focus on self defense?
3
Helmet for knife fighting sparring
7
Practical knife defense stance
0
How useful is a Karambit for Everyday Carry - noncombat
4
Is there a way to carry a knife in your teeth without hurting them, or is it just hollywood?
10
Which will be the best style for kung fu for self defense for a weak person?
1
I'm curious about learning a new discipline for self defense
4
Is "taking off your jacket" still recommended as the go-to strategy for knife defense?
2
Recommended grip for a small knife vs a standard knife