Force with a spear

When working with a rapier you use a very light touch, not just for safety reasons within the rules, but because that is entirely sufficient to kill someone and if you go any harder you are likely to get your blade bound up in their flesh.

This is true of a lot of narrowly pointed thrusting weapons, such as court swords: unless you are working to overcome metal (in which case for a court sword you are doing it wrong), there's more incentive to go light them to go heavy with the amount of force used. I've validated this with sides of beef, melons, etc.

It occurred to me, however, that this may not apply for a spear. Working with a straight-bladed spear (similar to a su yari, one without a crossguard in this case), for example: It's a wider blade and the shaft makes it easier to deliver harder strikes and have more leverage for removing the blade (and you frequently have two hands on it).

Assuming that I am not working to overcome hardened armor, should I be concerned about the blade getting stuck in an opponent and thus not use full controlled force on thrusts?

Wounding deeply from a distance--that's pretty much the job description of spears, pikes, yari, and the 57 other varieties of pointy pole weapons. Their "stand off" nature lets you deliver aggressive thrusts from the relative safety of several meters back. If needed, you can quickly move the weapon through a double-cone of positions for blocking.

So, yes. If you can deliver a heavy/deep striking force from range, that's ideal. Both the style of use and the weight/extension of the weapons will naturally require more force than the flicks and pokes of jian/rapier.

But...the world isn't always ideal. Pole weapons were traditionally an infantry (sometimes cavalry) melee weapon. They were very successful en masse, but don't seem to have found nearly as much favor in single combat. They're slow to move, thus vulnerable to quick side (flanking) attacks. (The longer they are, the better to strike at a safe distance--but also the slower they are to move.)

In single combat, even with a "stand-off" weapon, it's not always possible to fight at the full range. Combat can quickly close in to the range where maiming/lethal counter-blows are likely. There you'll need to use the staff part of the spear, or the stock and forestock of the rifle, not just the bayonet, for defense. Heavy/deep attacks suddenly don't look so automatically appealing. It becomes more like boxing, where you go for a knock-out if you can--balanced by the need to take care that you aren't yourself knocked out (or since we're talking about a spear fight, maimed or killed). It's no good to land your spear deep, then be mortally stabbed by a dying enemy. That's a waste of a good long-range, stand-off weapon and its wielder.

So it depends on the range. Use a killing / deep / heavy attack if it's available at a stand-off range, but if you're in closer, think defense. Consider not just the strike and the need to quickly free/re-ready your weapon, but also the probable counter-attack to whatever you've left open. That argues for a lighter touch, and at least until you can maneuver to a safer stand-off range where the weapon is more safely effective.

In the Chow Gar spear set, we use full force on both thrusts and strikes.

The picture from our NY 2019 demos was taken at the end of a horizontal strike down, sitting back into horse stance after a thrust. It's a block dropping the tip of the spear from about mid-chest height and rotating the arms to put in the ging. 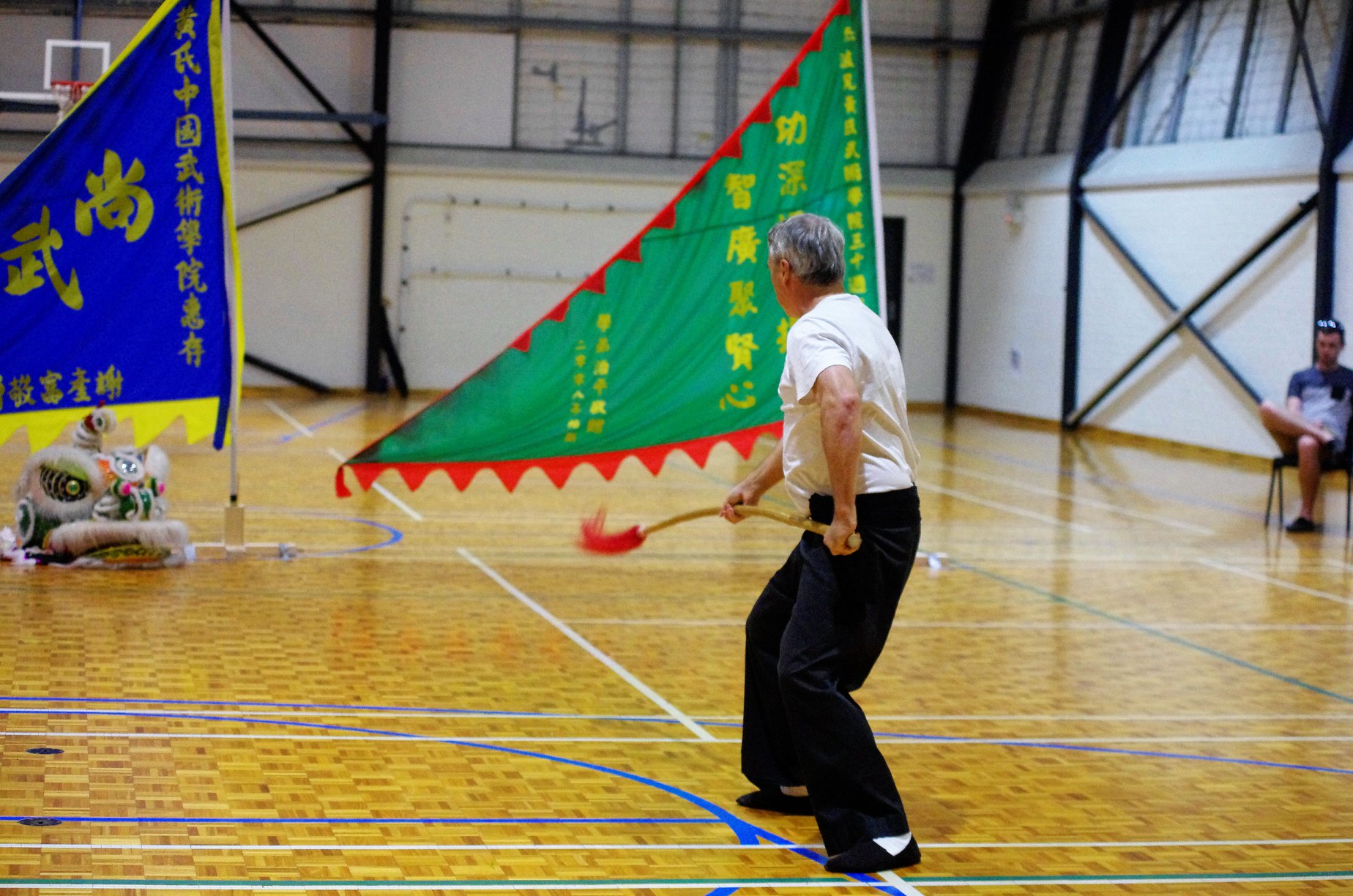 That is not a bendy piece of bamboo. To bend the waxwood shaft that much under static load I would have to lean my entire weight on it and would have been a bit worried about it breaking. I was very impressed with this shot when I saw it, and, yeah, fairly proud of my technique.

Also, as Roland says, this spear is a very fast weapon used in an extremely relaxed style. The set has a lot of jumps and rotations with the spear being spun, pulled in and used with two hands moving it. I also practise straight sword (Tai Chi gim), single and double broadswords. The spear darting in and out feels just as fast.

Not the answer you're looking for? Browse other questions tagged weapons or ask your own question.

12
How does Bartitsu's “foot hook with a cane” technique work?
8
What martial art should I try if I want to train with a wide variety of weapons?
9
Is it better to start out with a light weapon?
11
Exercises for strengthening arms, wrists and fingers with the intent of sword use
6
Does anyone actually fight with two katana simultaneously?
4
Picking a selfie stick with an eye to defense - carbon fibre vs aluminium characteristics?
5
Safe Sparring Spear
5
Any tricks to help with two hand wielding (dual weilding)?
2
Trick/Morph weapons aka weapons with different modes…
4
Is a fist with a kubotan effective and does it endanger the user's hand?