What Level Of Expertise Did Theodore Roosevelt Have In Judo?

During his tenure as president, Theodore Roosevelt held a third-degree brown belt in Judo (according to Wikipedia).

I know that in standard ranking systems, a third-degree brown belt is just below Black Belt, and just below an understanding of all the tenets of Judo, but what I don't know is if that was true in the first decade of the 1900's, or in America at that time.

What degree of expertise would a third-degree brown belt indicate for the president?

Roosevelt trained judo under two instructors (John O'Brien, and Yoshiaki Yamashita) for a period of around a few months each in 1902 and 1904. He maintained an interest in the art after this, corresponding and reading on it, and may have continued to sporadically train with wrestling partners, but by his own autobiography's account he only trained for a few years at most:

Accordingly I thought it better to acknowledge that I had become an elderly man and would have to stop boxing. I then took up jiu-jitsu for a year or two.

No contemporary records indicate he was awarded any grade during this time, and as such the oft-quoted brown belt remark appears to be a later invention, possibly based off of seemingly speculative newspaper remarks of the time e.g.

There are seven degrees in jiu-jitsu. The President's instructions are proficient in five degrees and Mr. Roosevelt Intends to have all five of them.

The earliest reference to any belt/grade conferred to Roosevelt appears to be from 1966:

Yamashita did not create a rage for judo there, but he did have some prominent pupils, including Teddy Roosevelt. The president practised three times a week and qualified for a brown belt.

However, the USJA in 2007 posthumously awarded Roosevelt an honorary 8th dan grade for his contribution to introducing the art to America: 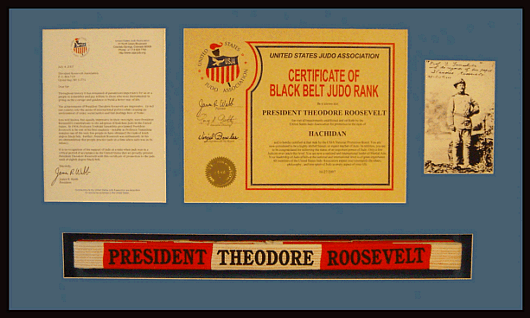 The second Sunday that I was in Washington when I was giving the President his lesson between 9 + 10 a.m...

A third degree brown belt is the lowest level of brown belt, not the highest, and is thus the furthest from black belt. A black belt does also not denote an understanding of all the tenets of judo.

A third-degree brown belt means that you're not a total novice to the art. Sometimes it means even less.

Teddy Roosevelt was a tough guy who liked many combat sports. He was also a major political figure. When he trained a little jiu-jitsu, someone gave him a minor rank. The practice of giving Presidents rank in martial arts is fairly common and doesn't always reflect anything beyond goodwill. In this case, it probably meant that Teddy could play competently with the judo guys who he trained with.

According to this document. he was the first brown belt in America.

Not the answer you're looking for? Browse other questions tagged judo history belt grading or ask your own question.

30
How did the colour belt ranking system originate?
3
Fact check-- highest belt level for a 21 year old
5
Did Samurai armour have flexible joints?
4
Taekwondo belt skills and level
4
What is traditionally written on a judo belt?
6
What style(s) of Jujitsu did Jigoro Kano study?
8
What did Judo change/innovate when it branched from Jujutsu?
3
Did Jigoro Kano invent the concept of Kuzushi in judo?
0
Why do kids have different belts in BJJ?
1
Are old high level black belts actually better than young low level black belts?