I found a graphic detailing belt colours according to ranks. In there, the last two judo ranks are red and white for 6-8th dan ranks and full red belts for 9 and 10th dan.

Is the highest judo belt really red? I thought it was black...

It is, and it takes a LONG time to reach.

If you ever reach your 9th Dan, you are awarded a red belt to wear. The white-red belt is awarded at 6th Dan.

At this stage, you need to wait for 8 to 10 years between each test, and it's not automatically given to you; the federation will only give the highest Dan to people who actually have an impact on judo as a whole. In the history of judo, there have only been 15 people who were awarded a 10th Dan.

In Canada, there have been only 4 people with a 9th Dan: 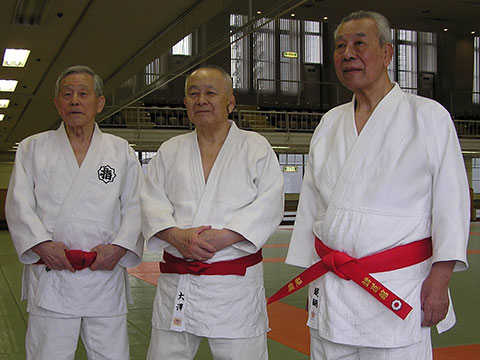 The image above can be found on the website of the Kodokan. It shows three holders of the 10th dan with their red belts.

I guess this settles it with an appropriately authoritative source.

To add to the (excellent) answers already provided:

Black is an arbitrary color for an arbitrary level. This is why I've told people to be very, very dubious of special "black belt tracks."

There are two reasons for this:

First, "1 dan" (or its equivalent) is an arbitrary designation within the art. It indicates that you have learned whatever set of principles they think you should know to be whatever they consider a 1 dan. This isn't flippant: It is part of why some arts get you to "1 dan" relatively quickly where others it can take years and years to get there.

This means that while comparing 1 dans within a single art is fairly effectively, it breaks down somewhat even between schools in the same art and almost entirely when you transition between arts.

The second reason is that, even within different schools within the same art, they will use different belts. I've seen a "brown belt" and a "red belt" mean the same kup rank simply because the organization as a whole had no prescription and the individual schools used different belt color ordering.

Basically what it boils down to is that if an individual is a "black belt" or a "red belt" it doesn't mean a whole lot without knowing how long it takes/what it takes to get there and where that particular school/tradition considers that belt color in whatever ranking system they use.

…which of course all assumes they even use a graded ranking system and that it is represented by belts, neither of which are even entirely universal.

The colour of belt associated with each kyu / dan grade depends on the organisation awarding the grades, which differs from country to country. However, it is generally standard across all organisations that:

Though the latter two are optional and often dans of any grade wear solid black belts in regular training.1

Note that in e.g. the BJA's grading system in the UK, a red belt is also awarded to 6th kyū (級) (i.e. the lowest grade). Equivalent beginner grades are normally awarded a white or yellow belt in other organisations.

I presume the introduction of the 6th kyū red belt was to mirror Kano's zen/"beginner's mind" like remarks on those that may progress beyond 10th dan:

... when one reaches this stage, one transcends such things as colours and grades and therefore returns to a white belt, thereby completing the full circle of Judo, as of life.

The full quote above implies that the (currently hypothetical) rank of 12th dan would receive a white belt from the Kōdōkan, but twice as wide as an ordinary belt to avoid confusion with a mudansha (無段者):

If he should be of such mettle as to deserve further recognition he would be raised to 12th Dan and given the title of Shihan, which until now has only been applied to our founder... For the purposes of recognition, however, it has been decided that the white belt worn by a Shihan should be about twice as wide as the ordinary belt, so that there is no chance of a beginner, for example, making a terrible mistake.

However, according to Wikipedia the Kōdōkan have since stated that the dan hierarchy now effectively stops at 10, and that they do not envisage any nominations above this.2

Promotion with the Dan Grades does not carry a change of designated colour until 6th Dan is reached. Even then it is customary for the holder to continue wearing a black belt in everyday practice, reserving the official colour for instructing, coaching, presentations and ceremonial occasions

Those Upper ranks tend to be more about service to the art.

Usually for 3rd DAN and above, any promotion would no longer be based solely on your technical skills, but by your contribution to the JUDO society. Contributions such as organizing international Judo events in your country, participating in international seminar or competitions, and other activity that would uplift the image of JUDO.

Mind you these were verbal explanation of my sensei who's a 5th Dan belt holder.

Aside from that, Judo and BJJ also share similar belt grading system and according to the official belt ranking system, if you obtained your black belt at the age of 19, you would only be getting your 9th dan belt (Red) at the age of 67yrs old.

Current IBJJF regulations places the time it takes to progress from a 8th degree red-and-black belt to 9th degree red belt at 10 years. In Brazilian Jiu-Jitsu, the red belt is reserved “for those whose influence and fame takes them to the pinnacle of the art”. It is awarded in lieu of a 9th and 10th degree black belt (identical to the art of Judo). Assuming that someone received his or her black belt at 19 years old (the minimum age to receive a black belt under the IBJJF’s graduation system) the earliest they could expect to receive a 9th degree red belt would be at the age of 67. Examples of 9th Degree Red Belt holders include the late Carlson Gracie, Oswaldo Fadda and Geny Rebello. The 10th degree red belt is permanently reserved to the pioneers of Brazilian Jiu-Jitsu: Carlos, Oswaldo, Jorge, Gastão and Hélio Gracie.

The Red colour is used to show the intense desire to train and the sacrifices made in achieving it. Since getting a white/red or pure red belt meant you invested a large portion of your life to your chosen art.

Also a lot of (Japanese Martial Art) systems theoretically have unlimited rankings so there could be 11th or even higher DAN ratings. It is just that no one has ever achieved it. :-)

But different organisations have different rules about what ranks you could achieve and what the requirements are. But all martial arts using this system got it from JUDO.

To achieve 10 Dan status under traditional Judoka lineage from Japan can only be awarded by Soke Kano's grandson/descendants . Judan is the most difficult level ever, and VERY few from the Kano line have achieved that over the last 120+ years.

Other International organizations have acknowledged or promoted a 10th Dan level outside of Kano.

Not the answer you're looking for? Browse other questions tagged judo belt or ask your own question.

30
How did the colour belt ranking system originate?
8
What does it take to get a black belt in Taekwondo?
14
Avoiding "Belt Factories"

11
Understanding the nature of a high ranking judoka?
17
What Level Of Expertise Did Theodore Roosevelt Have In Judo?
7
BJJ Instructor and Fighter Ranks
4
Is there such a thing as a toxic sensei? How to deal with one like that?
5
Why was blue chosen to distinguish competitors' judo-gis?
3
Are Biceps Slicers legal in judo?
8
Founder of a martial arts system passed away. How can current Black Belts move up in the system?
1
Are old high level black belts actually better than young low level black belts?