I remember reading a long while ago (when BJJ was first hitting popularity) about how they had different colour tips (or sheaths as they seem to be known) for their black belts (white and red from memory) where the stripes go. One colour was for fighters and one was for instructors.

If it is still the case, what is the process for crossing over from one to the other? So if someone got to be a 3rd Dan fighter rank but then wanted to go more in to teaching, do they just get a 4th Dan instructor rank on their next test or do they have to start again from 1st Dan instructor rank?

By the rules (IBJJF - International Brazilian Jiu-Jitsu Federation) the Brazilian Jiu Jitsu belt must have a black tip. In case of the Black belt the tip should be white or red.

Red is for who teach Brazilian Jiu Jitsu. Some guys ( and this is mistake ) change the black tip in other belts for a red tip. This is not right. Just a black belt should use a red tip.

White is for who practices Brazilian Jiu Jitsu. Some times called fighter. This is less commun. The most of the black belts who teach or not have a red tip in the belt.

The black belt receive the degrees by age. As a example the 1st and 2nd after 3 years. It's mean after 6 years in the black belt they are able to give a black belt as well. 3rd, 4th, 5th degrees after 5 years. Doesn't matter how long the guys are black belt if they choose change for white tip, they still have the number of years in the belt. 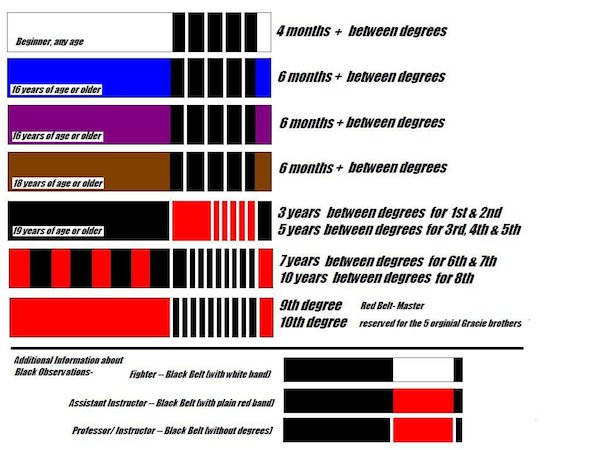 16
Is there any documentation of newaza in Fusen-Ryu?
11
How does the BJJ graduation system work?
9
Is taking away a belt appropriate discipline?
8
Why do teachers skip belts?
6
If the instructor recommends advancement, should I trust them?
4
Where to get lightweight belts for bjj competitions from?
1
Why aren't there more BJJ black belts?
0
Is it okay to get a custom belt if you're not a black belt?
8
Founder of a martial arts system passed away. How can current Black Belts move up in the system?