Does judo work against someone not wearing a judogi?

How would you evaluate a usefulness of judo on the street where the opponent is missing the judogi or any other kind of the outfit which could play that role. Basically I mean that t-shirt would be tear up rather used to pull and throw the opponent. Of course almost (if not) every throw can be performed with catching the body not the material but in my opinion it disturbs a bit or at least decrease the power of the technique. I have made a few randoris without judogis and that was totally a different (much harder!) story.

Great question and likely one which needs to be asked again and again. One short answer might be:
Judoka may execute throws in tactical (street) situations against assailants with clothing.

A longer answer might be:
Clothing is a tool in the hands of a martial artist; as my students have practiced with judogi, street clothes and various levels of attire. The rich reward to a persistent student is understanding the principles behind the movements where spontaneous finesse and adaptation 'mold the model' of a technique into application in live-time exercise. To the original question: are Jukdoka capable of using dojo-trained throws against street assailants? Absolutely!

That's the difference between learning and absorbing...

You know how sometimes some martial arts sensais teach very weird and specific situations? What do you do if someone grabs your left wrist from behind? You were never expected to use that technique in that exact situation.

It's about UNDERSTANDING the technique and to a lesser extend, muscle memory. Judo is about unbalancing the opponent and learning where you can exercise more force than your opponent. You are not expected to do exactly as it is presented. If you can't grab the gi, grab the neck or the underarm. The idea is to get leverage and understand how to unbalance your opponent.

Don't focus on the execution of the technique, rather focus on what it's doing and why it's doing it that way. For example, you can apply an kimura in nonstandard position but it's still just as effective; sometimes, you don't even need to complete the figure 4 lock to generate the same torque on the opponent's elbow. Just UNDERSTAND the technique, think of it as learning math or physics, understand it, don't regurgitate it.

SUMMARY: If you are good, it doesn't matter too much whether or not the opponent has a GI.

A little relevant folklure (this is from a well known Chinese novel on Martial Arts): I am writing only the important parts I remember:

A sensai is showing his two favorite pupils sword techniques. The sensai's techniques are fluid and difficult to perform. As the teacher executes a move he also shouts out the key to executing that move such as "make sure you draw your arm back as far as you can for maximum thrust" or "The feint should be as quick as possible then circle the blade from the outside of the opponent's sword inwards to strike the target"...

After the sensai finished all 36 movements of his swordplay, he asks the pupils, "How much of the techniques do you remember?"

The teacher sighs and replays all 36 movements, dictating the keypoints as he performs them. Afterwards he asked them again... "How much of that did you retain?"

The teacher nods at them and again perform the entire series of technique and pose the same question to his pupils.

The older one said, "I think I forgot just about all of them, only 10% technique remains clear to me." The younger one exclaims, "I think I got most of it down, I can perform about 90% of them now."

At this time, the young pupil thinks to himself, "My elder clanmate must be tired, how could he forget all the techniques that he had just learnt?"

The sensai then perform one last time and before he could pose the question, the elder pupil exclaim, "I think I got it, I forgot just about everything!"

The teacher smiles happily and patted on the elder pupil's should, "Well done... Well done..."

The younger pupil was very confused and asked the teacher, "I don't understand why you complimented him when he actually learned nothing from you."

The teacher then said, "He didn't remember anything, but he learned everything. Martial Arts is fluid and ever-changing, a technique is dead and rigid. You cannot simply learn the movement of a technique but you need to learn the idea of the technique."

The idea was that we don't learn boxing to learn exactly how to throw a punch, but to learn how to generate power properly and how to generate that power quickly and land a punch accurately. You don't learn Judo to learn exactly where to place your foot to trip someone, but rather you learn how to unbalance an opponent by understand his center of gravity and his weight distribution.

We are what we do repeatedly.

Judoka practice with the gi. Many throws can be done without it, but most judoka haven't ever practiced without the gi. Without it, many of their techniques will be slower and harder to execute. They will need to think more, and find alternatives. Because they don't train without the gi, their performance will necessarily be less.

However, it must be realized that even a t-shirt provides enough of a grip to perform many collar chokes and throws.

In BJJ, this is solved by training both gi and no-gi, so that one learns how to adapt techniques and which techniques to avoid or gravitate towards when training with or without.

The shortest answer is: yes. For a somewhat longer answer, a perfect example of judo working without a gi is current UFC Women's Bantamweight champion Ronda Rousey, who uses judo throws all the time to transition into ground and pound or submissions (usually an arm bar).

Historically and regarding the spirit, Judo essentially includes developing combative skills applicable in self-defence as one of its main goals:

Kodokan Judo, in its formative days, had three objectives: (I) to develop the physical body, (2) to train the mind, and (3) to develop combative efficiency. In Kano's words (1889):

Yet there is a tendency in modern (especially Western) Judo towards training it as a sport. This includes much less training in kata and the minimisation of mental and physical energy needed for the execution of a technique they were designed for (ibid:26). Instead, efficacy (i.e. executing some kind of technique at all), not efficiency (i.e. if executing a technique, then it has to be in the best of possible ways) is the main concern, as illustrated in the following diagram: 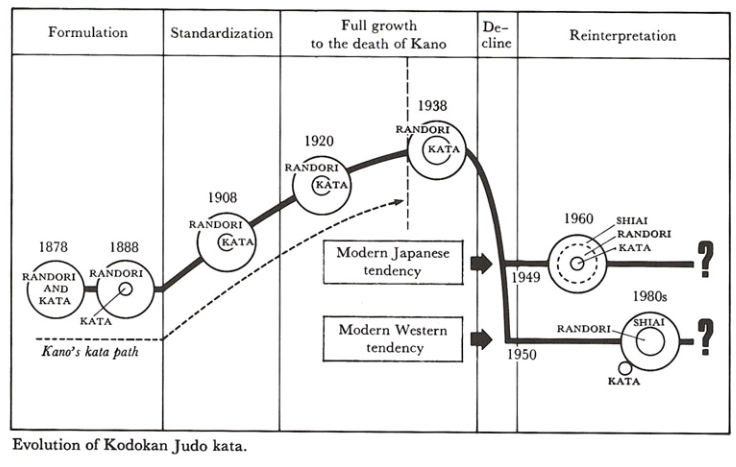 In the eyes of Kano, not emphasising kata as the center of Judo training must lead to considerable worse combating abilities:

Modern-day Judo training, in disregard of Kano's cautions, has come to have only the purpose of developing contest skills and the contest champion. By such a deliberate narrowing of the founder's intention for Judo, untold harm is being done to its practi tioners. (ibid:25)

And regarding the benefits of kata for combating:

Kano had a specific plan in mind when designing kata. He was aware that jujutsu practice was almost always carried out in kata style, and that the remarkable fighting skills of the warrior were due to a concentrated study of kata. Fighting skills did not come about simply from free fighting, but from knowing how to fight against an enemy under all conditions of terrain and weather; such concentrated study was made possible through the application of kata. (ibid:26)

As you may know, traditional Nage no Kata includes grabbing in a way as if there was no gi in some throws.

That his take on combating has its merits should be shown in the 1886 tournament against the strongest Ju Jutsu fighters in all Japan at this time, where - just like in the Kodokan itself - Ju Jutsuka were allowed to do any technique they know, including joint manipulations, strikes and kicks.

One point not mentioned here is that Gi collars are usually very stiff, to protect from chokes. Various chokes are actually a lot easier to perform on garments not specifically designed to make choking hard.

When we practiced Judo in our Martial Arts we have a mixture of sessions with Gis on and with normal street wear. This allowed us to learn the basic techniques in a dojo situation and in a practical setting.

Mostly any technique you learn will end up having a practical application outside the dojo and helps me reinforce what the move I have just learnt.

Not the answer you're looking for? Browse other questions tagged judo or ask your own question.

3
Judo for real world self defense?
3
Are there martial arts known to synergize with Judo?

14
What submissions are not allowed in competitive Judo?
11
Does practising judo increase the likelihood of sustaining a brain injury?
8
how to survive not doing hardcore Judo after losing your ACL forever
17
Do Aikido wrist locks work against stronger opponents?
10
Judo - Why does the ref sometimes pause the match when it goes to the ground?
6
Would aikido high feather falls work in judo?
9
In Tournament or Competition Judo can you use improvised techniques or throws that are not "officially" named?