As far as I am aware, there are no left handed sword techniques in Japanese sword arts. At least, I am not aware of there being such.

If it is true, does anyone have a good explanation as to why?

If it is false, could someone provide a counter example?

Upon seeing that all the newbies in the class were right-handed, my Kendo sensei told us the following: "I'm sorry everyone but, in Kendo, everyone is left-handed."

We really thought it was weird, seeing as the way we had to hold the shinai felt really natural, with the right hand near the tsuba and the left hand at the opposite end of the tsuka. We soon realized, however, that no matter how we originally felt about it, she was right. In Kendo, at least the style she practiced, everything started with the left hand, while the right hand, located closer to the center of gravity of the weapon, was placed in an ideal fashion to adjust the direction of the swing. In effect, this means that the right hand mostly comes into play on the second part of the strike, while the left hand is used during 100% of the technique (both readying the strike and the strike itself).

But, since you might not agree with "everyone in Kendo is left-handed", I shall give you some examples of strikes that are definitely left-handed techniques.

As the left hand is located at the complete end of the weapon, it is the hand that allows for the most reach. In Kendo, it is not forbidden to remove one hand from the tsuka, so it is not exactly uncommon to see Kendoka, especially those fighting in joudan-no-kamae, strike with only their left hand to get about an extra 8-12 inches of reach, without sacrificing speed. Indeed, when aiming for the men (the forehead) from that stance, one doesn't need to aim as much, only to strike down very fast, so the right hand isn't always required.

An example of a left one-handed strike from joudan-no-kamae can be found at the beginning of this video.

From the standard stance, chuudan-no-kamae, one can also see some strikes performed only with the left-hand. Most of the times, it will be very similar to the previous example, as the shinai is raised prior to the strike. On other occasions, however, you will see a one-handed tsuki (a thrust of the shinai aiming at the armored plate covering the throat). Again, since the left hand offers the most reach, most of these one-handed strikes will be left-handed.

An example of a left one-handed tsuki can be found in this video.

For completeness' sake, I'd add that right one-handed strikes are indeed possible. However, the way the scoring works in Kendo requires the strike to hit the correct spot (which is possible without the right hand) with adequate power (which is harder to do without the left hand, whose primary purpose is to bring power to the strike). Still, even left-handed strikes are deemed less powerful than two-handed strikes, and can thus be judged invalid pretty often. The examples that I listed earlier are the most often accepted forms of left-handed strikes. For the record, the only right one-handed strike I've seen score a hit was a dou (abdomen) strike performed by the only Kendoka I've ever met who fought using hasso-no-kamae.

Miyamoto Mushashi used two swords, one in each hand. I am not sure whether this qualifies as left handed in the sense of your question, but it definitely uses a sword in the left hand.

FALSE! Yagyu Shinkage Ryu's living traditions do practice left-handed techniques with the katana, including left-handed iai. In addition, the historical mokuroku/technique catalogues of the Yagyu Shinkage Ryu housed in Nara's Ikomayama Houzanji Temple dated to 1601 clearly depicts the katana being held in two hands with left hand leading for the techniques 添截乱截/Tensetsu Ransetsu/"Concomitant Cutting, Riotous Cutting" and Mu-ni-ken/無二剣/"Matchless Sword" as well as a technique depicting katana and wakizashi with katana held in the left hand, 火乱房/Karanbo

EDIT: Apparently this isn't just a Yagyu Shinkage Ryu thing; it is shown in earlier styles of kenjutsu. Some densho/technique catalogues housed in the Tokyo National Museum dated to the Azuchi-Momoyama period/Tensho 4-10/1576-1582 and attributed to the Aizu Kage Ryu, the Shinkage Ryu's predecessor style, also seems to show two techniques where an individual holds the sword in two hands with left hand leading: 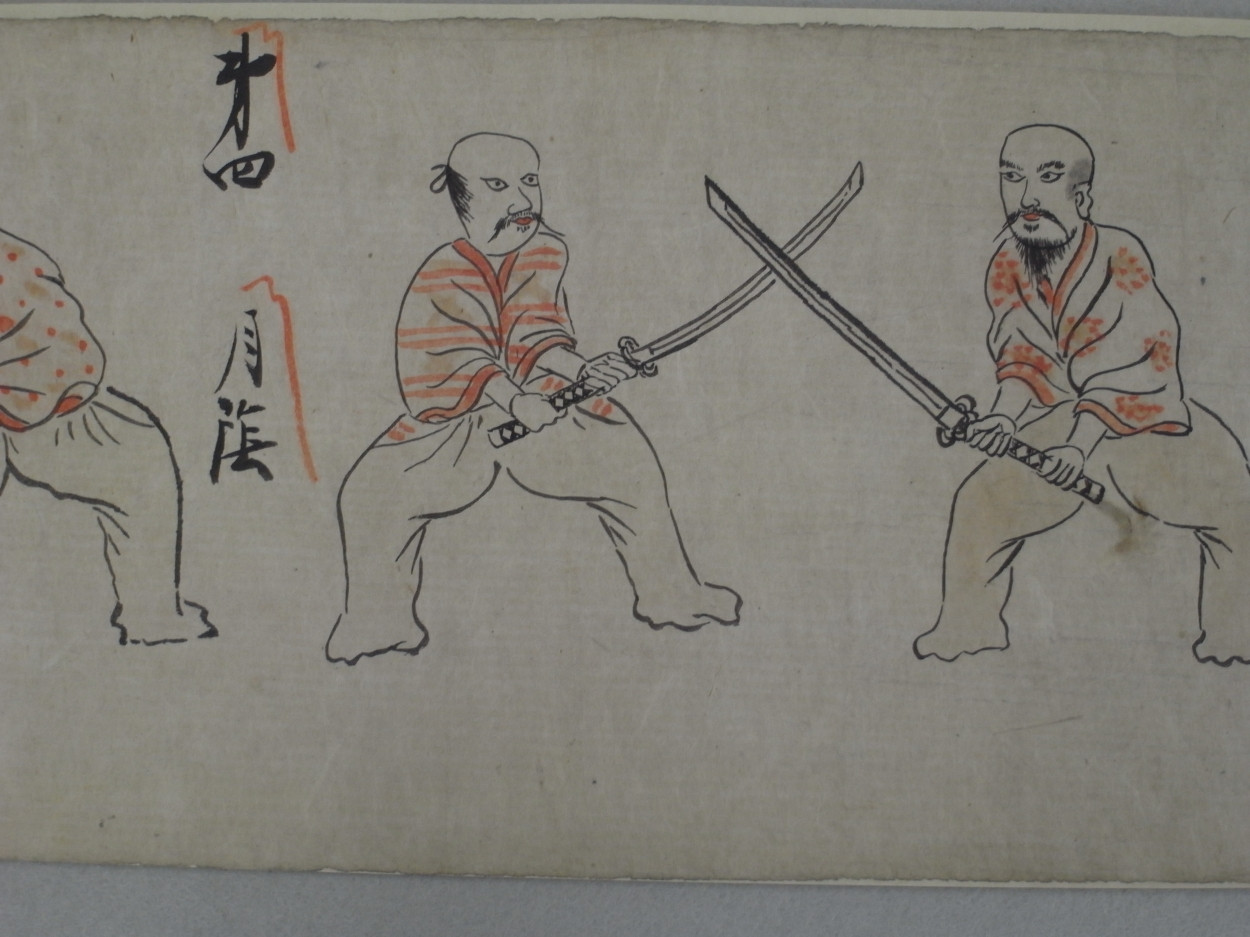 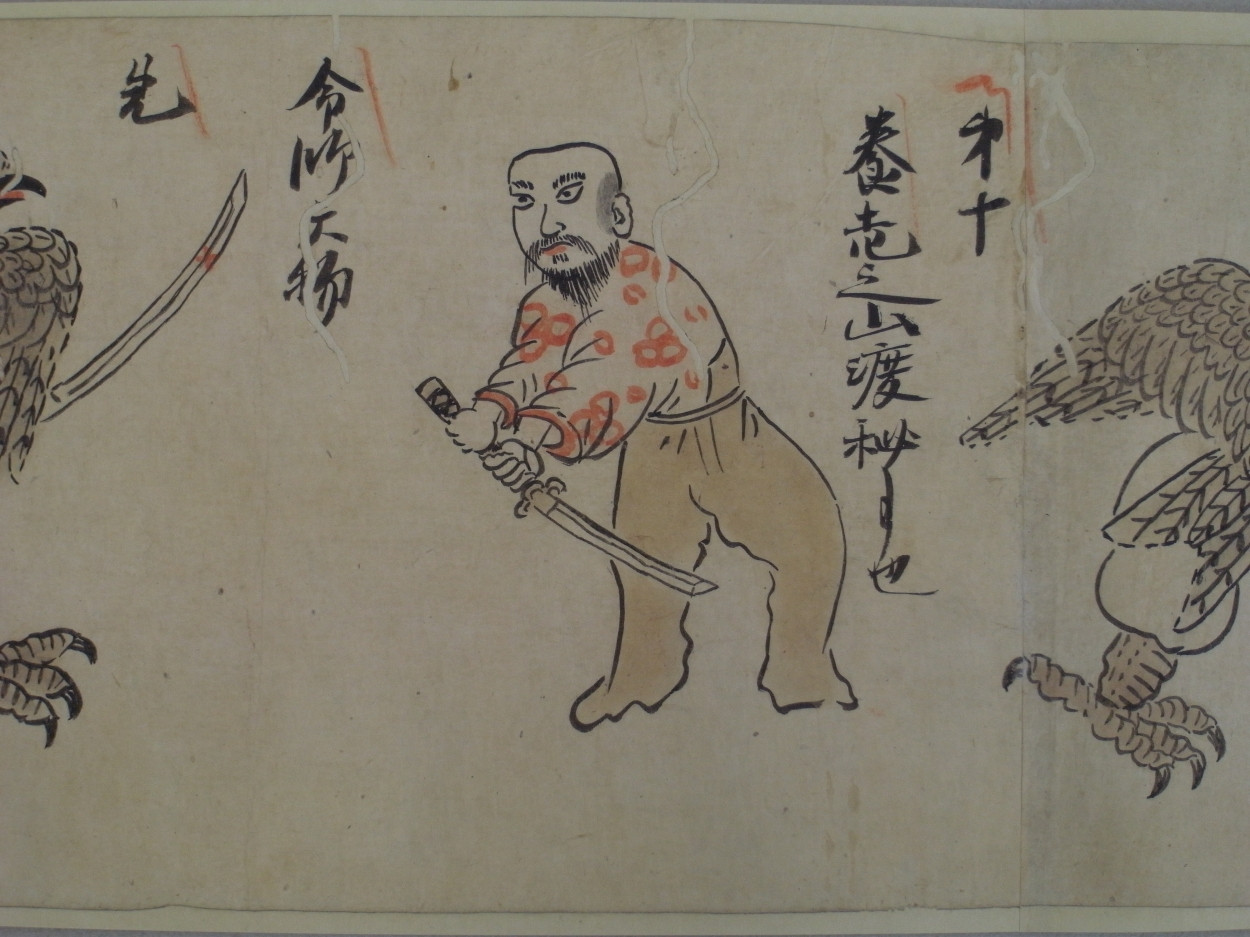 I believe that this comes down to cultural bias. Historically, for example, it would not have been acceptable to wear swords on the right hip.

I cannot imagine tho that there were no samurai who lost their right hands. Presumably, they would have used a wakizashi left-handed.

The only left handed technique that I am aware of is the quick left handed draw. (Watch Sanjuro).

Not the answer you're looking for? Browse other questions tagged sword japanese or ask your own question.

9
What kind of punching bag should I get?
5
Buying My First Metal Sword (HEMA)
3
Do women have any advantages in sword fighting
5
Defending legs with a sword
10
Why should "Oss" be used in Brazilian Jiu-Jitsu?
4
When to bind in european sword & buckler?
7
Purpose of non-sword hand movements
3
Japanese Short Sword Kata
3
Help learning Japanese Weapon Martial Arts?