What is the Brazilian Jiu Jitsu gi/no-gi controversy?

Brazilian Jiu Jitsu competitions have multiple events for gender, weight class, and gi (cotton uniform)/no-gi. These events are similar to different stroke events at a swim meet. You can choose to enter gi or no-gi events. 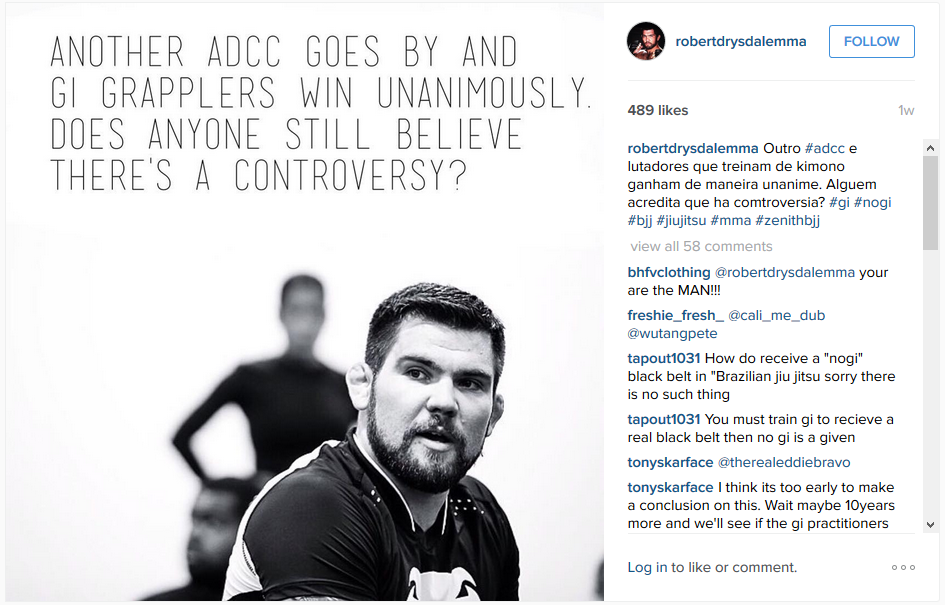 Another ADCC goes by and gi grapplers win unanimously. Does anyone still believe there's a controversy?

Gi and no-gi have a long rivalry in BJJ and grappling that has changed character dramatically over the course of the art's history. Most modern jiujitsu practitioners from the US train both and don't think much about it, but there are still a significant number of polemicists on both sides.

BJJ came from judo, which trained exclusively in the gi, and so was similarly a gi practice for decades. In Brazil, one of BJJ's rivalries was with Luta Livre practitioners, whose grappling was partially derived from wrestling and trained without the gi. (This rivalry and difference in training clothes may have involved class/wealth issues as well--the gi is costly equipment.)

The proving ground of BJJ was always primarily two-fold: grappling and fighting. Grappling skill was generally proved in BJJ competitions, with the occasional foray into judo, sambo, or wrestling tournaments. BJJ for fighting was proved in dojo challenge matches, street and vale tudo fights, and MMA matches. MMA and vale tudo fights were generally contested near-nude, and though some everyday clothing can be used for grips or chokes, street fights generally didn't involve anything akin to a gi. These no-gi competitive fighting opportunities gave rise to no-gi training and no-gi grappling competitions. Non-BJJ grapplers from Luta Livre, wrestling, catch wrestling, and Sambo fed the popularity of this kind of training. Eventually, some BJJ grapplers specialized in no-gi, and in some extreme cases arguments were made rejecting the gi entirely.

The primary remaining argument centers around how much one needs to train with or without the gi for success in either gi or no-gi grappling, self-defense, or fighting (whether vale tudo, MMA, or whatever). One argument goes that MMA is contested without the gi, therefore one should train without the gi. Another goes that in cold seasons we wear jackets, so we should train the manipulation of jacket-like clothes. Yet another set of arguments centers around which training modality is more "technical" or more "athletic", which may in fact be a disagreement over the ease of escaping the opponent's techniques. There is contention over how much training in one contributes to skill in the other, with arguments and personal experience claiming each direction is superior.

But again, many students ignore the controversy and have fun training both. Nowadays most BJJ gyms train both gi and no-gi, with the split in training time spanning the entire range. Some teachers emphasize the gi first, saving no-gi for advanced students. Some only do no-gi at open mats, not regular class. Most competitive gyms are nearly 50/50. The biggest implication in one's training is generally the choice regarding techniques that are effective in one modality but impossible or difficult in the other, such as collar-grip-based submissions or guards, and some chokes that are applied best with a fast and deep grip that is hard to effect with gi sleeves and collars in the way.

This is basically a matter of traditions. Traditional Brazilian Jiu-Jitsu practitioners wear a gi, stemming from their origins in Japanese Jiu-Jitsu which uses the gi as the standard in most of its martial-arts. Many BJJ competitions require wearing a gi for all competitors while others are "no-gi" competitions where competitors can wear clothing more similar to UFC-wear, compression shorts and rashguards. There are also technical differences in scoring and rules between the two due to differences in what's possible when there's clothing to be grabbed for holds.

The post you provided is the only thing I've found indicating that there's a "controversy", but I suspect that some people feel that a no-gi training is closer to real-life conditions where your attacker might not be wearing a heavy cotton garment which you can use to tie them up in, and that fighting in one is giving your opponent advantages. However, currently, the traditional practitioners are still winning against opponents who do not sport the uniform, which seems to contradict the hypothesis. You can find some message board discussion of the two different schools of thought here for example.

Not the answer you're looking for? Browse other questions tagged brazilian-jiu-jitsu gi no-gi or ask your own question.

9
Beginning Jiu Jitsu, learning gi and no gi at the same time