Impact of arching the back when kicking

When chambering and releasing kicking, I have the habit of arching my back.

I feel like this is a bad habit, but I don't have much information to back it up.

I was wondering what were the impacts of arching the back while kicking? Can it cause back problems because of the stress on the back, would it reduce the power of my kicks? Can I do something to avoid arching my back if that is indeed a bad habit?

First, arching the back has a positive effect of slightly increasing your reach during the kick, as the displacement of your upper body backwards allows you to thrust your hips forward that small amount. One martial art where you will see this significantly is Capoeira, where the traditional Benção, a front thrust kick, involves arching the back to increase range (as well as moving the upper body away from an attack). 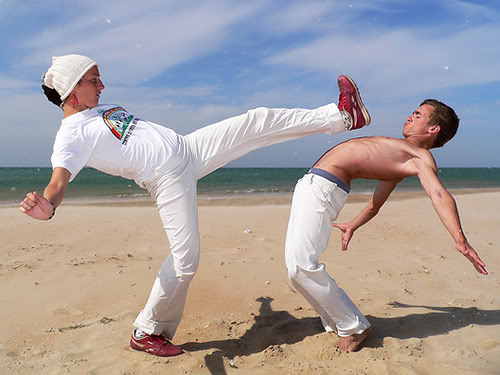 I would suspect that, if you arched your back while chambering a spinning kick that turned the other direction, you could gain a slight bit of extra momentum from moving your upper-torso forward to start the spin, albeit at the cost of telegraphing your movement. Lastly, as noted in this question about butterfly kicks, arching your back can be advantageous because it helps keep your upper torso elevated during the kick.

Unfortunately, it's not all sunshine and roses. I haven't found any material specifically dealing with martial arts, but arching the back while benchpressing has been linked to back injury and diving similarly sees back injuries from arched backs as the diver hits the water. This fellow issues the same warning for a number of exercises involving arched backs, although I take that with a bit of a grain of salt since he seems to be vilifying a rather large number of exercises that people do safely every day. Anyhow, the long and the short of it is that arching your back hyper-extends your spine and puts additional pressure on the discs of your back. It's probably not all that harmful for the kicking itself, but if your motion is interrupted, say by being struck yourself, you're putting yourself at risk of the impact and subsequent whiplash hitting your extended spine and causing more serious injury.

So, in short, you're probably best off not arching your back during the chamber or kick because it could contribute to spinal injury, unless the kick specifically calls for it. As for how to prevent it, your best bet is noticing it when it happens (filming yourself or having a friend watch is probably your best bet. Obviously, you're probably best off not wearing anything baggy for fear of obscuring your error) and then correcting for it. Do the motion as slowly as you need to to be mindful of your movement, then speed it up until you've kicked that habit at full speed.

Arching your back... there's a right way to do it, and a wrong way to do it. Beginners do it the wrong way, and what happens is that as the upper body goes backward, and the leg goes forward, the foot doesn't have much to back up the kick. If it's a front kick or round house (any X- or Y-axis kick) then you have the potential to miss the target by undershooting the kick, although the power is kept. If it's a side or push kick (any Z-axis kick) then you have the potential to pull the kick, thereby robbing you of power, although, the kick does maintain its intended course - so doesn't affect aim, unless the arching is really bad then the kick is entirely pulled without hitting the target.

Additionally, if the arch isn't controlled, you end up throwing your body backward, and that can throw you off balance.

When done properly, you are thrusting the hips forward normally, it's just the back arching back. Beginners can't do this: they don't know how to separate the hips and the back into distinct movements. So an experienced kicker can arch the back as both an evasion and counter, all without loss of aim or power.

As to other effects, arching the back places tremendous forces on the lower back, which becomes the foundation for the upper body. If you are not well conditioned in the lower back, your posture becomes strained. That leads to back and neck pain in the long run.

Not the answer you're looking for? Browse other questions tagged tae-kwon-do kicking or ask your own question.

4
Should I arch my back in a butterfly kick?

11
Balancing control and intensity in sparring
5
Proper Toe Position for Boots with a Front Kick
7
The 180 degree leg split
4
Tips to kick in the thigh without being blocked by the knee
4
improving endurance for martial arts kicking routines
4
Avoid anterior pelvic tilt on the long stance
4
Is there a mathematical model of how much force is applied to joints during various tae kwon do activities?
6
How to beat a Kickboxer with a Bruce-Lee-type stance and a Taekwondo/Karate background?
2
How can you keep "three feet on the ground" and still perform an effective kick?
1
Kick with front leg vs. back leg