How do I increase my wrist strength for punching?

When I throw a punch, sometimes my wrist doesn't stay straight and I run the risk of spraining it. What kind of exercises can I do to strengthen my wrists so that my wrist isn't going to bend when I punch?

I feel there's a core issue here being neglected:

When I throw a punch, SOMETIMES MY WRIST DOESN'T STAY STRAIGHT and I run the risk of spraining it.

If I could highlight, underline, and make it flash, I would. Your issue here is not simply wrist strength (which, by the way, is not going to be corrected by simple strength training alone), but rather your form. Let me do my bold and caps thing again here to drive this point home:

IF YOUR WRIST IS OUT OF ALIGNMENT, YOU RUN THE RISK OF SPRAINING YOUR WRIST

Shocking, I know, but there's a key here: If your wrist is out of alignment. If it's not, your strike will be true, the impact will be absorbed down the long bones of the arm.

I really can't stress this enough: you must work on your form before you can rely on your punch. So, let's break down a punch (not necessarily your punch; I don't have any idea what you're studying, so I'll describe one method:

Punching with good form is its own workout. Your body naturally adapts to the lifestyle you set it to: If you work in a job sitting at a desk for 8 hours a day, your body adapts to that; if you chop wood every day for 2 hours, your body adapts to that. Punch to build the strength you need in the right muscles rather than performing exercises that target general groupings at the risk of not developing essential muscles.

There are a few things you can do:

The knuckle pushups have the following benefits: strengthens the fist, strengthens the forearm muscles. But they also have some drawbacks: rough on your knuckles, overdoing it can induce joint pain.

Fingertip pushups also strengthen the forearm muscles, and help with knife-hand techniques. They are hard to do, but well worth your time.

If you don't have access to a kettlebell, you may want to try alternating pushup styles:

If you have access to a heavy bag, that will give you the most direct work to get used to punching. However, I recommend on not taping up or putting gloves on. As a martial artist you need to toughen your hands to be able to hit properly. Sure, the rough material on the bag doesn't feel good--but it's a part of toughening the skin as well as the joints involved in the punch. Concentrate on technique and form. Use your hips. Don't try to be fancy. If you need to buy a heavy bag, I recommend a good 50lb bag. Any heavier than that is unnecessary, and potentially will wear out your joints quicker.

Strength and Form, Not Wrist-Specific Strength

Your best bet is improving your overall strength, not your wrist strength specifically. This, along with practicing good form with your punch against resistance, will keep you from bending your wrist. As Mark Rippetoe points out, it is more productive to get you strong, rather than get your wrist strong:

Strength is the most general adaptation. It is acquired most effectively through exercises that produce the most force against external resistance, and as such is always best trained with five or six basic exercises. The same exercises that are correct for weak football players and lifters are correct for weak volleyball and baseball players, because the best way to get strong will always be the same. Strength is NOT specific, and cannot effectively be acquired through exercises that mimic sports-specific movements, because these movements lack the potential to produce as much force as general barbell exercises, and therefore lack the capacity to make weak athletes as strong as barbell training.

Focusing on wrist strength alone will lead you to do physical therapy or bodybuilding-style isolation workouts. You'll get just as much wrist strength by doing whole-body strengthening exercises, with the added benefit of being stronger all over. Wrist rollers, wrist curls, and other hyper-specific work is best left to the injured, or those who are strong but have a specific deficiency.

That doesn't mean you can't get yourself stronger alongside some punching-specific work. How?

Hit things. Bag work, as suggested by many others, is a great suggestion. Keep it light and short as you start, and gradually ramp up the intensity over several weeks. Focus on maintaining good form with a straight wrist. Historical implements like the Okinawan makiwara or the Chinese wall-sandbag are useful too, though they omit the (enormously helpful) element of simultaneously training your footwork. Hitting something reinforces proper mechanics while at the same time making denser bones and stronger soft tissues.

Lift. If you want stronger wrists, I imagine that push-ups, pull-ups, and presses should be central in your lifting program. Normal push-ups are okay at first, but clapping or knuckle push-ups are superior and should be switched to as soon as possible. Pull-ups, particularly on a thick bar, rope, or towel will strengthen your forearms (as well as most of the rest of you) and thereby help you maintain wrist position as you punch. Adding weight will be another great help, so overhead presses, performed with lots of weight for low reps, will train your ability to keep the wrist straight under heavy loads. Those will work with kettlebells, dumbbells, or barbells (in decreasing order of my opinion of each tool's wrist-strength specificity).

Vertical Knuckle push ups on a soft surface will train your alignment and improve the stabilising muscles around the wrist.

Keep the elbows close to the body and use the front 2 knuckles of the fist.

Do not allow your wrist to buckle side to side - keep the correct alignment through your hand, wrist and elbow.

This gentleman's left arm has good alignment, but his right wrist has buckled. 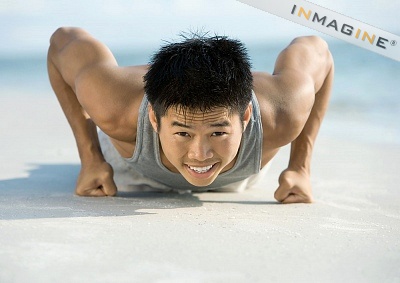 If you need an easier introductory form, try simply holding the push up position with the arms fully extended and try completing the same push ups from your knees.

You don't have to do LOTs of this, just a regular 10 - 15 minute session working the bags will do a lot for improving the your whole of your punch, including wrists bending on impact.

I had the same problem. I did the following to strengthen my wrist. I still do end up bending my wrist occasionally but mostly the problem has gone.

1) Take a tennis ball (or any other not too hard one) and squeeze it. This will help develop the grip strength and help hold the wrist in alignment when punching. You could also do it with one of those grip strengthening devices.

2) Jump Rope! Jumping rope with a heavy rope. (Focus on maintaining the rhythm instead of speed). The rope has to be heavy enough to cause fatigue in the forearm. This helped my develop forearm strength and hence keep the wrist in alignment. (Do not keep too tight a grip on the handle and let your wrists roll a little.)

simple dumbell exercises are great for strengthening wrists. i did a lot of these when i was having trouble with wrist pain and it helped a lot.

there are 3 movements you will want to do.

start with a fairly light weight so your wrists can get used to the movements, and increase the weights as you go.

i see a lot of people posting about doing pushups to strengthen wrists, and while push ups are great for general strength and whatnot, if you have weak or injured wrists, there are exercises you should be doing before attempting knuckle or finger tip pushups.

Just want to throw some Hojo-Undo in the mix.
Specifically the Chi-Ishi and Ishi Sashi.
After a few weeks of using the Chi-Ishi my wrists and grip strength were noticeably improving, and the tools are really simple to make.

One simple one I used to do until I got decent strength in my wrists was wrist raises and twists with a light dumb-bell or barbell.

In a seated position, rest your elbow on your knee, forearm out in front with a light dumb-bell.

Raises palm down or palm up help to strengthen the main muscles in your forearm which hold your hand rigid, and twists help to strngthen the twisting muslces.

There are some really good answers but I'd like to add some more into the mix.

Additional tip: don't use any wraps or thick gloves during your heavy bag exercises as it is totally contrary to what you want; hand wraps and thick gloves stabilize your hand and wrist, which won't help you get stronger wrists. Use light thin heavy-bag gloves!

What really helped me was to tie one end of a rope around a section of dowel rod, the other end to a 30lb weight, lift the contraption off the floor (with feet wide apart in case of system failure), and turn the dowel rod to slowly "wind" the rope around the rod, first up, then slowly down... then repeat the other way. Keep your back straight to avoid strain.

Of all the answers I like Patricia's best. There is little musculature in the wrist proper. The muscles that flex the wrist or hold it stable are in the forearm. Hand-curling motions, hand extension motions....The old classic "wrist roller"....All these strengthen the flexor and extensor musculature in

You could try punching walls a bit. Slowly punch the value and punch in such a way that you feel only your knuckles against the wall. Slowly increase the power behind your punch. It helps a lot. I have been doing that for some time now.

Not the answer you're looking for? Browse other questions tagged exercise technique punching or ask your own question.

23
Good exercises for higher side kicks?
19
What exercises are safe (or not) for total beginners?
10
What are good exercises for strengthening knees to hold stances better?
20
What are the advantages of using a vertical fist for punching?
6
Wrist strength for sticks
15
How do you reliably measure your punching power?
6
Punching: Which way to Rotate Knuckles?
3
Boxing Jab at Short Distance