I've been going to a new gym for a few months. One of the instructors doesn't like me and keeps calling me out during class for random things like using "big" words. In light sparing today, apparently he thought I was going too hard and sent a pro fighter to rough me up. He hit me pretty hard, knocked me down and had me seeing stars.

I spared with 4 people before the pro fighter; no one told me I was going too hard and I didn't land any hard shots. Not sure about the practice of checking fighters with more experienced fighters? Should someone normally say something first? Is that a practice that a lot of gyms do?

I am not sure how I should handle it, but I'm pretty angry.

Obviously I'm not going to be able to out spar a pro fighter who weighs almost 200 pounds (I'm 150 pounds). I don't know if I was supposed to stay there and take his shots. I hit him back as hard as I could to get him off me, but that didn't do anything. Kind of feel like it was some kind of bully thing picking on someone who obviously can't defend themselves against you. If anyone had a problem with me why didn't they just say it? 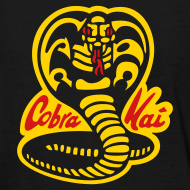 Is this the logo of your club? ☺

On a more serious note, what you are describing is called bullying which is a form of abuse. Bullying should not be tolerated in any context whatsoever.

So, what can you do?

First, if you were knocked out: seek medical help as soon as possible. You might have more damage than just "seeing stars". Some might be permanent.

Second, talk to the coach one on one and ask that they explain their attitude. It could be that this is a case of massive miscommunication. Give your coach the benefit of the doubt, but do bring this to them.

If your coach is dismissive, unapologetic, and continues their bullying, report the instructor to their organisation as a bully. This can be their manager, if the gym is run out of a reputable club, or the next in line in their organisation. Make sure you use a neutral tone, have evidence (times, specific instances, and details), and any medical reports on injuries you sustained.

Third, the gym sounds like it is not a healthy place to train. Consider finding another gym or another art altogether.

While you should never talk to the police, you might consider talking to a solicitor/lawyer to take legal actions against said gym. If you have severe trauma due to the sparing, this might be out of your hands as your doctor might start legal proceedings.

You don't happen to go to Eric Kelly's Cherry Street boxing gym, do you?

I'm kidding. But if you watch that video, I wonder if you might see some things in common with your gym experience.

Coaches can be intimidating. They push you. Usually it's because they want you to step up your game and learn quickly, because they believe you're capable of it (they see your limitations as being more "mental" than physical in that case). Other times, like in the video above, they just don't like you and want to give you a rough time.

If your coach is teasing you for using "big words", then it sounds like he might have a problem with educated, white collar people (assuming you are one), or people who are just more cerebral and want to know why they're doing stuff. Or he might have you pegged as some other "type" he doesn't think should be there.

Like in the video, the guy may think educated, white collar people are too soft, too casual, and maybe not willing to take a punch and get bloody. In other words, not cut from the same cloth as he is. So he might hold you in contempt.

I'm really guessing on this, though.

Either way, I think what happened to you is unprofessional. And I would walk. I wouldn't come back. I don't care if the instructors there have trained dozens of professional fighting champions. If they can't relate to me in particular and know how to motivate me in a positive way, then they can't coach me. It's their failing, not mine.

Then again, it could just be that the coach doesn't like you. I'm just guessing, but what your coach might think about you is that you think you're superior and have an attitude. I'm not saying you actually do, but he might think you do. In that case, putting you up against someone who's in a completely different league in terms of physicality and skill level would be their way of confronting the attitude they perceive from you.

I'll just add one more thing. Every gym has a culture. For the first few months, each newcomer there has to learn that culture. There are a lot of unwritten etiquette rules, such as how often you should verbalize what you're thinking (some coaches look down on you talking and prefer action instead). There are people there who don't like conversation at all. You might be looked down upon for wearing clothing or other gear that's overly expensive or something only really advanced people generally wear. Everyone in your gym could have very short haircuts, while you come in with your long hair. Etc.

Those are all things that you're supposed to pick up on in the first month or so. It's the culture. And you would be better off trying to blend in. If you can't, then you might want to go elsewhere.

Before you quit that gym, though, you might want to talk with your instructor and ask why he set you up with that pro fighter. Start the conversation by telling him that that guy sure did kick your butt, and that you're not in his league. Then ask why. With that humble admission, he might be more willing to open up about what he really thinks about you. If it goes down hill again, just walk out and never come back. It's simple.

Sounds to me like you should find a different club. Unless you want to train to be a bully. In a year or two, maybe you will be asked to beat up the new kid. Will you do it?

A few things to keep in mind :

4.Training hard and disciplined sometimes gets mixed in with coaches...that's life.

I know how that feels Matt, used to happen all the time at hockey & football. The coach thinks you're soft. He wants to make you into a fighter. You want my honest opinion? unless the guy is a pure a-hole, he's just trying to make you harder (like, carved out of wood Hard). don't take it personally because he's probably not personally attacking you. he's just busting your balls and looking for an excuse to test you. don't freak out. he wants you to man-up. the more we as men realize it's not all personal...!!! get it? the more we own-up and act more like real men.

don't take it personal is all i'm saying. go in there nose first, get hurt, and after some time, that same coach is going to put you above everyone else. he thinks you're nothing, prove to him who you are bro. good luck... and put the personal issues aside.

n.b. if he is really an a-hole, maybe start looking for a new club... sorry!?

Not the answer you're looking for? Browse other questions tagged training sparring safety or ask your own question.

8
Sparring against Offensive Fighters
21
How can I become a good training partner
13
Should I stay in a Muay Thai gym where the fighters hit without much restraint or consideration?
7
WTF Sport Taekwondo - Beating front-leg fighters
8
Is there a statistical correlation between deaths in the ring and having one's father in the corner as one's trainer?
6
If the instructor recommends advancement, should I trust them?
14
Etiquette for sparring with women - How to find the balance and not do disservice?
7
If yelling is so good, why MMA fighters don't yell often
3
Why don't MMA fighters wear Double Mouth Guards on both top side and bottom side?