What should I do if I'm fencing stick-on-stick and we get stuck?

Somebody attacked my with a bat-like wooden stick. Fortunately, I have a wooden stick as well. He makes a lunge, but I parry it. We get stuck just like in all movies: 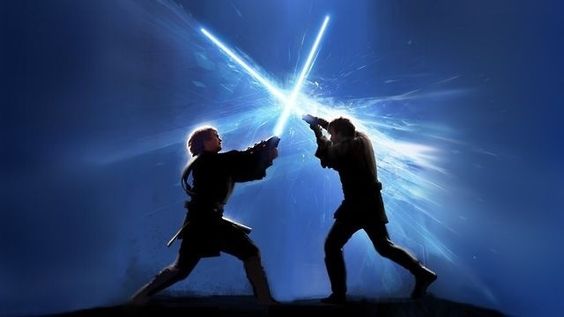 What should I do next?

From a Historic European Martial Arts (HEMA) perspective, you have some options open to you:

These solutions brought to you by Fiore dei Liberi and Johannes Leichtenauer, 14th century fencing masters. These systems of fencing were meant to be applied to many different weapons, and many techniques can be used with humble sticks. There are many other things you can do here, but I consider them too dangerous to simply give out, such as the one which involves dislocating your opponent's arm! If you're interested, find a HEMA club.

As a final note, this situation is one to be avoided. There are simply better ways to handle an overhand strike, or any other strike, which don't involve such a perilous, uncontrollable situation. Each of those above options can be done by you or your opponent! Some of my favorite options:

Sticks don't "get stuck". There's no cross guard to catch the main body of the weapon.

If you ended up in a position of stick vs. stick without momentum, it would break into a different position very quickly:

You can look up videos or books on a number of stick fighting methods from Filipino Kali & Escrima, police baton training, short or long staff training from Chinese, Japanese, or Korean arts, and so on.

I really don't know how to explain this. The movies are there for entertainment. Everything you see there is entertainment and has little to no relationship to reality. Please don't think that you can look at anything you see in any movie and assume it in any way represents anything which has or does or would happen in reality.

My recommendation is to seek out some competent training.

I'm no fencing/stickfighting expert, but some options that come to mind include:

I would not recommend letting go of the weapon unless you are close enough to be able to inflict lots of hurt before the opponent registers that you dropped the weapon. In this case you should be in a position to finish the fight (not just disarm them).

Another option you have is: leaving your hand(s) in roughly the same spot, move the tip of the weapon down until you have a 45° angle (the weapon tip should now be pointing towards the ground). I can't give you a name for this technique, but there is a block similar to it in escrima (and it's likely there are similar moves in other weapon arts).

If executed fluidly this should leave you fully protected from the opponent's weapon. If the opponent had any sort of momentum going when you execute this move it will continue and they will slide off and quite possibly be off balance. If you step in the direction of your strike while doing this it will enable you to move towards or past the opponent on an angle, striking or cutting on the way.

Not the answer you're looking for? Browse other questions tagged weapons mixed-martial-arts fencing positions or ask your own question.

33
What martial art should I start with?
4
In fencing, what is a point of fact?
5
Force with a spear
8
What to look for in a training/mock gun?
6
Wrist strength for sticks
9
Blisters from sticks
4
What to look for in a wooden weapons set
4
How do I increase my flexibility to obtain a full lotus position?
1
What is the primary technique of Wudang sword?
2
Muay Thai: Down Parry Technique for Head Punch