Ask Question
Asked 4 years, 2 months ago
Active 3 years, 11 months ago
Viewed 376 times
5
Closed. This question needs to be more focused. It is not currently accepting answers.

Want to improve this question? Update the question so it focuses on one problem only by editing this post.

I have been a Karateka for about 10 to 12 years, but haven't been training for multiple years now. My wife has little to no fighting experience. I am interested in buying a self-defense device. I know that this is not making anyone safe in itself - especially against someone with serious training or weapons, e.g. a gun - however it might help somewhat and in some cases.

Hopefully there are some statistics or some research has been done or some security experts out there that know what they are talking about from solid experience.

I write down what I investigated and what my thoughts are. Though I do have martial arts experience, I actually have hardly any real street fighting experience (lucky me, I guess). Thus, I hope that answers are less guesswork than my own thoughts.

Both, my wife and I, are very similar, except as a women she has a lot less strength. We are around 30 years old, both pretty slim (around 135 pounds / 61kg), small (around 5.65 foot / 1.72 meter) and not muscular, though of athletic statue. We do some sports, but not enough to say we are well trained.

We would like to do some self-defense training (both for protection and fun), which would be once a week.

Even if we train, the main issue of just being the really-not-bulky type will remain for both of us.

Threats to face might be mugging, (sexual) assault, and "I don't like your face" situations; one would hope to simply escape, but this isn't always possible.

Maybe someone will say something like "do self-defense training instead", "be aware of your surroundings", "run, don't play around", and they would be right of course. We are thinking about doing self-defense training (partly also just for fun). These devices are not supposed to be a substitute, but an addition, since we both are not exactly the Hulk (more like the opposite).

1. Sirens (to surprise, not to call for help)

Like http://www.amazon.com/dp/B00NSOW4KO, the idea is to pull a cord from the device and it gives off a very load sound that can scare off (like "wtf, I'm out of here") or at least surprise an attacker long enough to run away. In order to be not too stunned yourself http://www.mace.com/screecher-personal-alarm might give the sound a direction. To have it always close to you http://sirenring.com/pages/how-siren-works might be a good choice for women.

Some flashlights can be really bright and the strobing is indeed pretty disorienting, giving one time to run away (or attack if really necessary). I am not sure if the disorienting effect remains for a while, once I turn tail and run.

A real issue though is finding a flashlight that goes into strobing with the push of a button - haven't found any. So far all need several button pushes to change into strobing which makes the whole thing pretty difficult to handle in a high-stress situation (which is dumb in my opinion, because what else is the strobing for?).

Might be pretty effective, but might also require some training that might not work in the high-stress situation - but I am not sure. Wind, not-so-open space etc. might make pepperspray a danger to oneself as well, not just the aggressor. Might be more dangerous to the attacker then intended. 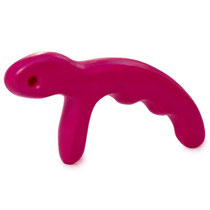 Are there some apps like that where one can set a different phone (e.g. the partners) mobile as the security buddy, instead of a firm? E.g. I thought maybe an app that sends an SMS to a predefined number with the coordinates and a predefined text?

I forgot to mention them. Guns cannot be carried in my country.

Out of the things you mentioned, I would recommend pepper spray/mace. I believe this sort of thing is legal in all of the US (I'm not a lawyer, nor do I play one on TV), and I have seen it in effect first hand when one of my friends accidentally activated a keychain variety leaving multiple people in tears and coughing. I disagree with the premise of needing training for most of these kind of sprays, they are the simplest of the weapons you mentioned. In fact I would say they are probably the weapon requiring the least amount of training, and the highest likelihood of escape (even from multiple attackers). I have experienced firsthand the "Million volt" stun gun/wand type weapons, and they are extremely innefective in terms of dissuading a determined attacker, and completely useless against multiple assailants. In terms of firearms and knives, you once again run into the issue of training. although I would absolutely recommend the purchase and training involved with using a hand gun, as this is bar-none the most effective option if used correctly. I would not recommend a knife for personal defense, as it is neither easy nor very effective. As to strobes/sirens, I would not consider them as anything that would deter a strong, determined attacker. I hope this helps. I know there is a lot of personal opinions/hearsay in it, but sometimes that is what you need.

I use this: Kubontan Strike in the right points and it would be effective.

10 years of karate may give you some advantange in a fight ( wouldn't it? ). Practicing again would be a good way. Some videos would help you to remember some moves.

I do not know about your country laws, but knives use to be allowed. But I know it requires some practice.

Not the answer you're looking for? Browse other questions tagged self-defense or ask your own question.

51
Which martial arts focus on self defense?
25
Self-defense against chainsaw attack
5
Is grabbing or manipulating the nose potentially an effective attack?
6
Which martial art would minimize hand injury?
6
Applying WTF Tae-Kwon-Do to self-defense
0
Attacks against intoxicated individual with high pain tolerance
4
Relatively safe standing throw/grapple/manipulation techniques?
1
Is there a way to tell which BJJ techniques should be used for self defense?