How do you harden the outer side of your thighs?

I was sparring with a friend and he is much bigger than me, like 95Kg, and he went for a big kick on my "vastus lateralis", shown below.

I want to know what kind of training I should do to harden this part of my thigh? 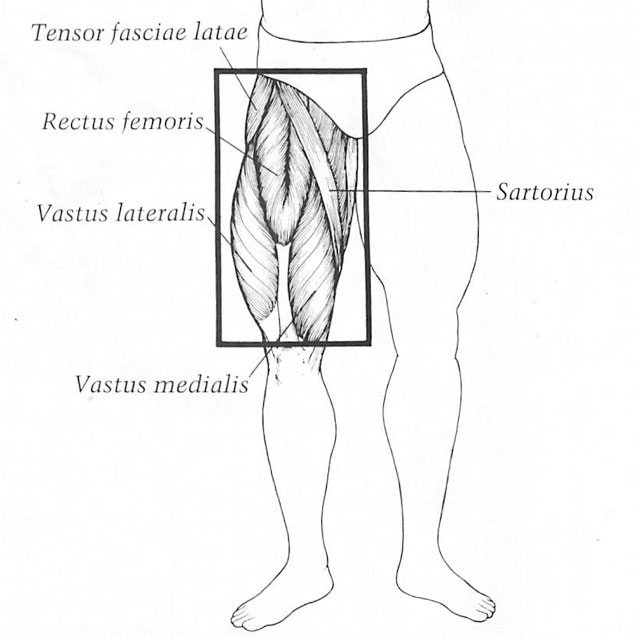 You can't actually "harden" soft tissue through conditioning. You can:

A) increase the muscle strength and density (though strength training), which gives you better ability to absorb/resist hits

B) condition yourself to work through the pain and numbness by regularly taking thigh hits.

Otherwise, it comes to do avoiding the hit, or doing some form of blocking.

Classic Muay Thai raises the knee and drops the elbow inside your leg to defend, which spreads the surface area at the cost of your balance. I've seen some Filipino fighting styles throw the opposite leg's knee to serve as the blocking surface - which can be really dangerous to the attacker's leg if you're quick enough to read and get it.

Many modern fighters raise the knee slightly to give some tension to the muscle to resist and try to get some minor deflection. Many MMA fighters turn the hips to try to spread the impact across the front of both thighs instead - the drawback here is that sometimes the attackers' foot can slide up into your groin.

Of course, all of these are done in conjunction with the strength training and pain conditioning I mentioned.

You can train to endure the pain better but that's about it. Getting hit in the thigh will always hurt and will often cause you to fall over. It is also questionable whether conditioning is actually a good idea as it basically equates to damaging the nerves beyond repair.

Really it depends why you train. Self defense? Probably not worth it. Competition? Depends on the rules.

To deaden the nerve endings you need to be hit repeatedly in the area in question with a blunt hard object. For the face this is too dangerous but it should be fine for the thigh.

The other questions here answer the intention of the question quite well: Don't take lowkicks if you can avoid it. No matter the muscles, a well-performed lowkick can be crippling.

If you just want hard upper legs / thighs, I may be able to help, as I happen to have that (people often complain about hurting themselves when kicking me, due to that. Been called having iron legs, as a result).

I got 3 ways for it, the first one mostly being available only when growing up. I suppose it will still have effect when you're older, but to a lesser extend. The other 2 need to be done in combination of each other.

Again, all this is personal experience. Your milage may vary. Also, I can't stress it enough: even with hard, strong thighs, don't be daft and take lowkicks like candy.

I am having the same problem. I am old (51) and slow but I don't mind pain in my ribs, but by thighs turn to granite after one karate roundhouse kick mawashi-keri.

My only means of defence is to get close in and keep close in if I can since the round house kick requires some distance.

A Kyokushin karate friend recommends the standard shin raising defence made more speedy by, as it were, jumping with one foot, tapping/springing off the ball of the foot rather than just raising the leg, but I can't seem to read my opponents legs quick enough. Once one adult has kicked my thigh, then children can cripple my stiff-karate-thigh with the next blow to the same thigh. Full recovery seems to take more than a week.

Another, Shinbu Ryu karateka I think he said, karate acquaintance and instructor said one way of countering the thigh attack is to stand with front foot slightly raised so that even if kicked it will swing and not hurt the thigh which is horizontal and difficult to hit anyway. He called it the cat foot (neko ashi) stance. It looks rather like the famous Karate Kid "crane" pose but with hands down and not so extreme. Here is a google image search for the cat foot pose in Japanese. Not only does it protect the front, kickable thigh, but it allows for various kicking attacks. https://goo.gl/aUofbY Here are some Japanese people demonstrating movement, kicks, how to defend and how to attack (get the rear leg) the cat-foot position https://www.youtube.com/results?search_query=%E7%8C%AB%E8%B6%B3%E3%80%80%E7%A9%BA%E6%89%8B Since kicking the knees is now illegal in kyokushin karate, a pose in which the thighs are level with the knees would make it almost impossible to hit them with round house kicks.

The same man also said that he would be unable to sit down for a week after a karate match due to the damage to both thighs.

I guess the cat foot pose is similar to or a more extreme version of the first respondents "Many modern fighters raise the knee."

My stiff-karate-thigh is not that painful so much as just stiff and so I thought it was partly psychological -- my leg going into stiff mode so I thought "the getting used to it" method might work. But then I see that my leg has swollen up quite a lot so I realise I have done myself some damage.

I have a strap on my thigh now and that seems to help as did jetting hot water on it in a jacuzzi.

Not the answer you're looking for? Browse other questions tagged training tae-kwon-do karate self-training or ask your own question.

11
How to get fit (again) for Judo
9
Aikido - working with difficult uke
13
Men hitting women too hard in martial arts
3
Leaning out of axis
2
Adapting from karate to jiu-jitsu
4
Is there a mathematical model of how much force is applied to joints during various tae kwon do activities?
7
Improving Skills with Mental Training
6
How to beat a Kickboxer with a Bruce-Lee-type stance and a Taekwondo/Karate background?
4
How to spar an aggressive fighter shown in the shared video