Name and meaning of stance where you stand with fists on hips?

After the first Kiai in Heian Sandan (source):

The stance at the bottom-right corner of the image below, marked as the 11th move (image taken from here): 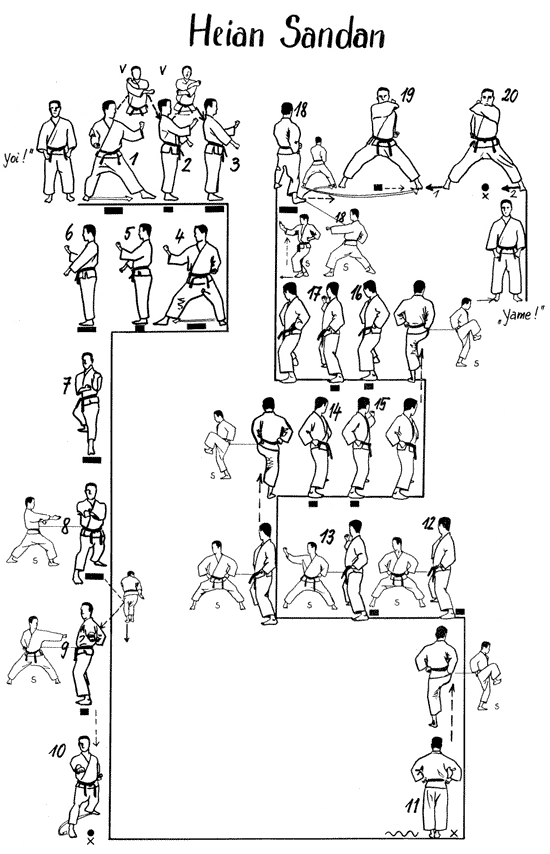 We didn't get to study this Kata's Bunkai yet in the class I attend. What is the meaning of this move and stance? To a novice like me it seems like a vulnerable position that I wouldn't expect to being used in combat.

Your intuition is correct. It is a very vulnerable position. That should give you a clue about its bunkai.

For those that don't know, Bunkai is the Okinawan karate term used to refer to the practice of analyzing a kata for its self-defense applications.

Right off the bat, you know this is not a block. And you can conclude that because it would be insane to keep your hands low and at the hips like that if you're expecting someone to punch you.

Another clue is that the form has you step forward and then turn around.

Well, what these observations tell me is: 1) Someone is either holding onto you, or you are grabbing someone else, because you're not expecting a strike. And 2) That person is behind you after you turn around.

Let's observe the bent elbows also. Why bend them like that?

The next thing you do from this position is to make a big step out while turning your body 90 degrees. You drop into a low horse stance. And you do this while keeping your elbows and arms locked in that original position.

But before that, did you notice that high knee? You actually bring that knee way up as high as your chest! What's that about?

At the end of this step forward, you twist your torso counter-clockwise and press forward with your right elbow a bit while remaining upright. You keep your arms in their initial position chambered at the hips throughout the movement.

Why would you not move your arms from the initial position to the next position?

I think we're nearly done. We just have to add one more observation. Position 12 to position 13 follows up by doing a back-fist to head height. What's that about? It must mean our arm is now free. Was it free all along?

Okay, let's get to the explanation.

This is what Judo refers to as an "O-Goshi-Nage" (hip throw), but there's a twist, which I'll get to in a moment.

First, in the movement just before you turned around (movement 10 in the diagram), the position has your right arm straight out after a punch to the solar plexus. And your left fist is chambered at your left hip. It's a pretty typical "karate" stance. What does it mean?

The left fist chambered on the left hip is an indication that you've grabbed someone by their wrist or their sleeve and have pulled it back to your hip. Otherwise, it's ridiculous to keep your left hand that low. In a real fight, you would only do that if you had grabbed his wrist or sleeve like I said. You would never want to drop your hand to your hip in real life.

Then you step forward with feet together and turn 180 degrees. While doing that, you're putting your arms in the weird elbows-out position with your fists both chambered at your hip. Why?

Well imagine a guy is in front of you. You've just grabbed his right wrist with your left hand and yanked it to your hip. You took your other arm (right arm) and reached around behind his back and grabbed a hold of his belt or his clothing at his right hip. And you turned your back towards him as you did it, so that your back is now against his front.

You still have control over his right wrist. It's still being held securely at your left hip at this point.

This position now looks more or less exactly like the kata's position 11.

Next, you bring your knee straight up high. Why?

Well if you have control over his right arm by pulling it to your left hip as I've mentioned, his right elbow is now pointed down. That means you get an arm break for free here by simply bringing your knee straight up into his elbow. The leverage provides the strength to keep his arm straightened as you knee it. Snap!

Incidentally, this explains why your feet are together as you turn around and why you're in a high stance. Usually you want a lower stance if you do a hip throw like you're about to do next. But if you're in a low stance, you can't break that arm of his as easily.

And I've seen variations of this form where you don't just bring your knee straight up, you sweep it inwards also, as you bring it up. That could be more effective for breaking the elbow, since the elbow points slightly outward and not just perfectly downward.

Next, you step out on a 90 degree angle into a low horse stance while maintaining the original arm positions. Why?

This is the hip throw (o-goshi-nage). You maintain control on his right wrist with your left hand while using your hip to throw him over your right side. You let go of him at his waist, though, after the throw. The low horse stance gives you the leverage. Taking a step while doing it provides some additional momentum.

Position 13 has you then do a back-fist high. We've seen this before in classical jujitsu, aikido, and judo. It's used as a distraction. It's a way of saying, "You might want to begin this sequence by doing a quick back-fist to his face."

While he's distracted by the back-fist, you can do stuff to him more easily, including that elbow break.

But I left out one detail: What is the scenario where you might find yourself able to use this?

I have one particular scenario in mind that I think makes the most sense:

Imagine someone is threatening you with a knife in his right hand. He's pointing it at you in front of him. Maybe his right leg is forward, or maybe he's standing square with you. His left hand is in a guard position, perhaps.

You begin by doing a quick back-fist to the face. That causes him to be distracted, and his eyes will be closed and unable to see what you're about to do, if you're fast enough.

Next, your left hand reaches up and grabs his right wrist or sleeve from the inside. Some people call this is a "monkey grab". You pull that wrist back to your left hip while twisting his wrist so that the under-side is pointing upwards, and his thumb is pointing outwards. This elongates his arm and points his elbow downwards. It also means that blade of the knife is pointing away from your body, which is important. Otherwise, he might use that knife to slash or stab at your abdomen.

And then you complete the application. You step inwards to loop your right hand back behind him, then do the standing elbow break with your knee, and finish with a hip throw.

The elbow break is only important if your opponent has a weapon in his hand. It removes the threat of that weapon. And that's why I chose this scenario. Also, if he has a knife, twisting his wrist with a sudden jerk to your hip can cause the knife to go flying out of his hand.

An alternative to this bunkai is to go all the way back to the beginning. This time your left hand grabs his left hand instead of his right hand. And so you yank his left hand to your left hip, step forward, turn 180 degrees (your back towards him), and then press your right elbow against his elbow as you turn. You're side by side now. The pressure will cause an arm bar. Stepping out and at 90 degrees will extend that arm bar and throws him by it. It could also break that arm. The back-fist at the end can be used if the throw wasn't successful and it merely moved him.

That alternative bunkai feels good to me, but it lacks the high knee. It wouldn't make sense in this context. So this means that this bunkai is less likely to be the original intent of those movements in the kata in my opinion.

Being able to see this stuff requires cross-studying in classical jujitsu, in my opinion. Because, that's what karate kata is. It's classical jujitsu, encoded in a unique way meant to make it easier and more reliable to remember.

The entire 2nd half of Heian/Pinan Sandan (from the turn, position 11 in the diagram) is a single application.

The drill (kata applications are drills) is approximately as follows:

This description explains every single movement for the entire second half of Pinan Sandan. There are a number of takeaways from it.

Not the answer you're looking for? Browse other questions tagged karate forms stance shotokan or ask your own question.

18
Why is more time dedicated to exercises and very less for sparring? Is it for the fee?
7
Why do we teach unrealistic bunkai?
7
What is the purpose of slow movements in poomsae / kata / taolu for?
4
Starting position in Shotokan's Tekki Shodan
4
What do Chinese Kung Fu Instructors Look for in a Good Display?
5
Final punches in Shotokan's Jion kata: Straight punch or hammer fist?
2
Adapting from karate to jiu-jitsu

6
How to beat a Kickboxer with a Bruce-Lee-type stance and a Taekwondo/Karate background?