In movie "Never Back Down: No Surrender (2016)", Michael Jai White is seen practising a footwork technique shown below. 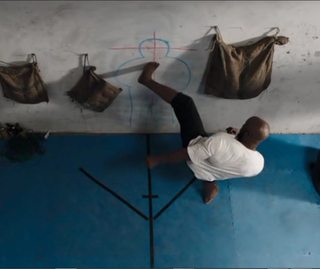 Is there any such technique in Karate? If so, what is it?

It's hard to say without better context, but that looks like a standard Side Step drill, as seen here. Diagonal step in, kick. Repeat on the other side. The duct tape provides a tactile and visual guide for the steps. The image on the wall provides a target.

You can see similar duct-tape diagrams in this boxing footwork tutorial and I know that my SCA light fencing class similarly used them to teach the technique of a diagonal step and counter-attack.

As Steve Weigand noted in the comments, it is commonly covered in karate. I personally experienced one-step drills in Tang Soo Do (later changed to Chun Kuk Do) and Tae Kwan Do.

Not the answer you're looking for? Browse other questions tagged karate footwork or ask your own question.

12
Pivoting for a kick
12
Sliding the Feet in Contact With the Ground
8
Origin of the "pinyon" in Villari's Shaolin-Kempo-Karate system?
14
Is modern martial arts effectiveness intentionally reduced?
6
Why don't karateka practice ground-fighting and takedown defense?
5
Age and Restrictions, Learning Karate
3
Drag back foot forward during a cross
2
Can the Rolling Wheel kick (Kaitan Geri) of Kyokushin Karate be used on hard surfaces?