Could someone give me definitions for

Note: I'm struggling to understand the difference, relating to a yellow belt student.

For Sang Palmok Makgi (twin forearm block) or Sang Songkal Makgi (twin knifehand block), one arm is at the mid-section, with the elbow roughly level with the bottom of the ribs and the hand level with the shoulder; the second arm is above the head (in a similar position to a rising block). The final hand positions are different (closed fist for the former, open hand for the latter), but the arms are apart.

For Doo Palmok Makgi (double forearm block), one hand is in a middle block position (elbow roughly level with the bottom of the ribs and hand level with the shoulder) and the other hand is level with the elbow of the first hand. For Doo Bandalson Makgi (Double arc-hand block), the two hands face palm outwards at roughly shoulder height. Thus, the arms are together.

Perhaps the criterion is to do with whether or not the arms swing into the block together from the same side of the body?

Double forearm block (doo palmok makgi) has both arms swing around the hips together, while the double arc-hand block (doo bandalson makgi) has the arms/hands start near one shoulder then swing together into the block.

Twin blocks are either moving in different directions (sang palmok makgi), or coming in from opposite sides (e.g. twin palms). 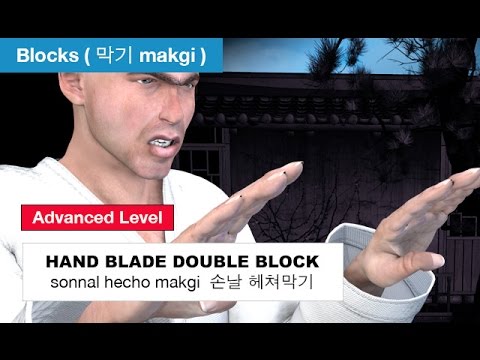 I'll ask my instructor- it seems that he told me the difference once but I can't remember exactly how he worded it-- maybe a "twin" is both hands in same position and a double has a different position for each arm? We call the first move of Dan Gun a "double knifehand block", which is against a single attacker, and move 13 of Do San a "twin outer forearm block", which I was taught was to prevent a choke grab also by a single attacker. I'll ask next week- sorry I can't be more definitive.

Not the answer you're looking for? Browse other questions tagged tae-kwon-do itf or ask your own question.

11
What is the “sine wave” substyle of ITF taekwondo and how did it originate?
6
I Ching and Taekwondo forms
4
What are the starting points for learning Tae Kwon Do?
4
Are Peyton Quinn's books appropriate for a 19 year old or are they beyond my level?
2
Why are there 52 moves in the ITF form Choong-Jang?
4
Itf taekwon-do competition rules for patterns
5
How do General Choi and his peers consider mental illness
4
ITF and WTF Black belts
5
Defend with leg and knee