What height should women tie their belts?

As a woman starting in BJJ, I find that wearing my belt as low as the men in my class results in it sliding, during a roll, from my hips to up higher up onto my waist, which is naturally much smaller than a man's. This results in it falling open constantly. I started to tie it higher to prevent this, and a male student immediately corrected me to tying it lower.

My question is, is there any tradition of women tying their belt higher on their waist in order to prevent their gi from constantly falling open?

Some women do wear their belt a bit higher on the hips. Wearing it at the waist is somewhat rare and I mostly see it at lower ranks. What I usually see is top of the hips: 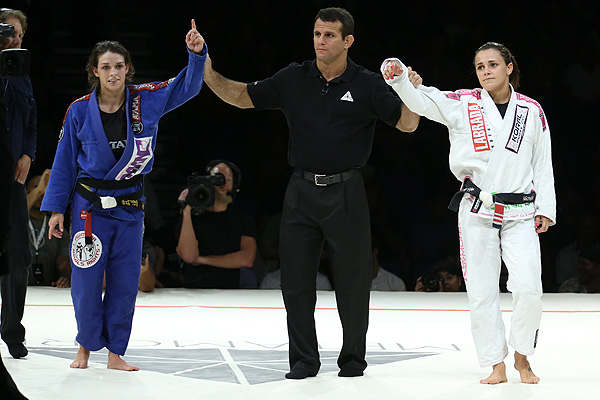 But your struggle is real! Lots of BJJ players, particularly women, fight "upward belt creep". The jacket falling open is totally normal. The natural state of a gi jacket is half-tucked, with a belt half-tied. This women's gi BJJ highlight has maybe 50% of jackets open at any given moment.

I feel your pain. For some reason, I too have trouble keeping my gi jackets from falling open within seconds of rolling, drilling, or even warming up. (The only ones that don't are the ones that have a long "skirt", such as a slightly larger double-weave gi that I wear for judo competition.) There is even a small minority of male BJJ players who wear ludicrously short gi jackets in class, and prefer to tie their belts low on their hips, leaving only a few centimeters of jacket tucked below the belt. Naturally this comes loose with the first grip taken. To me this is extreme, and I notice that women in BJJ tend to be less likely to follow it. But it goes to show just how unusual it is for a gi jacket to stay in place in BJJ.

The solution is to get good at re-tying your belt fast, at re-tucking the jacket between rounds, to be OK with your jacket flopping about, and to tie it wherever feels best. I find that tying the knot super-tight (and softening the belt so it can be tied so tight) helps keep things together as it slides around.

Not the answer you're looking for? Browse other questions tagged brazilian-jiu-jitsu belt or ask your own question.

27
To what extent do (should) judo and BJJ overlap?
9
What are the techniques a white belt should master to become a blue belt in BJJ?
12
What do the colors of Gi in Jiu-Jitsu mean? Which should I get?
0
To what extent can (and should) throws be used in Brazilian Jiu Jitsu?