In shodokan aikido competition, both aikidokas don't use mouth guards. Considering the nature of resisting opponents, it will be difficult to push the opponent's chin exactly, there is a risk of breaking teeth when executing shomen ate or ai gamae ate. 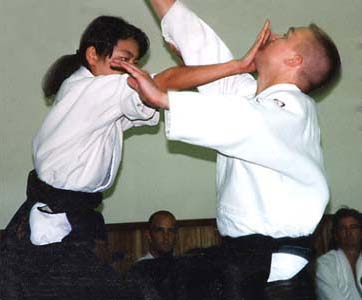 How dangerous is executing shomen ate or ai gamae ate in the competition? Do we need to use mouth guard or chin guard?

There is also a risk of breaking teeth when executing gyaku gamae ate. For example, the executor accidentally strikes the opponent mouth with the executor's elbow.

That photo is an awful aigamae ate which if used in a competition would result in a dangerous technique warning and penalty. The photo pretty much describe everything you should not do while doing aigamae. The main point is the hit under the jaw snapping uke's head back: this is likely to cause wipe lash on uke's neck thus is a dangerous technique.

The point of aigamae ate (and all atemi-waza to a greater extent) is to move the head beyond the hips thus breaking balance. Tori's hand should move to the side of uke's head and push downwards towards the collar bone. While it looks like uke's head is snapping back, it is not: it just moves back due to movement being applied forward. Here is a tiny gifs of shomen ate and aigamae ate:

Note the uke's head move sideways first, then as tori drives forward, is moved backwards out of hip alignment. Note as well that tori's hand is on the side of the face, not directly underneath the jaw. The latter explains why teeth clashing is not such a big problem in the first place.

As for mouth guards, they are not required but neither are they frown upon. I wore one when I was competing, so do many others. From a oh-so-scientific survey of my memory, I would say about 1/3 of competitors do use them. Do not quote me on that. ☺

As for head guards, I have seen them used but once. However, there is nothing in the rules that forbid them.

The rules for randori competition in case you wanted to read them.

How dangerous is executing shomen ate or ai gamae ate in the competition?

If you hit the opponent it will be dangerous.

Do we need to use mouth guard or chin guard?

If you do not want do run risks, yes, you need to use protection.

There is also a risk of breaking teeth when executing gyaku gamae ate. For example, the executor accidentally strikes the opponent mouth with the executor's elbow.

If you strike the mouth, yes.

There are techniques to prevent that, like keeping your mouth closed (even teeth closed), a good evasion technique or other skills to redirect opponent attack.

Not the answer you're looking for? Browse other questions tagged aikido or ask your own question.