What are the physical requirements for Sumo wrestlers? No exposing six-packs?

Having seen many pictures of Sumo wrestlers on the web, I have not found ones who expose their six-packs or ones who have appearance as follows. 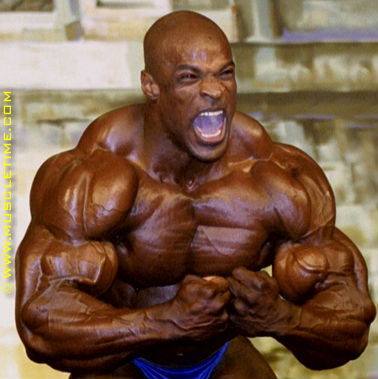 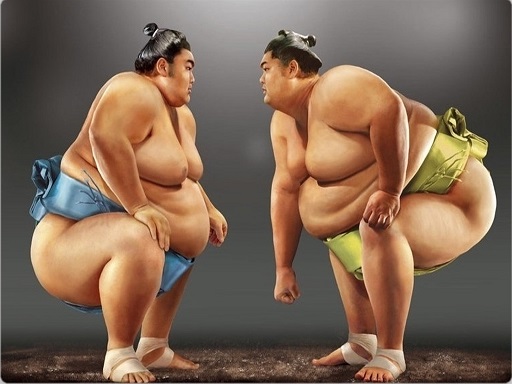 Generally speaking, what are the physical requirements for sumo wrestlers? Can a Sumo wrestler train his body to expose his six-pack abs?

Mass is one of the most important aspects of winning sumo bouts.

The most prominent physical requirement, at least in Japanese sumo, is height.

Past that, there is no weight class. Since the other rules, such as prohibiting a large number of potential strikes and reducing the allowable gripping area of your opponent to basically his belt and what you can physically encircle, limit your options when it comes to a pure physical confrontation, having more mass is important (this sort of goes back to that real-world bit where a larger opponent generally has the advantage despite all of the tales of 5 foot nothing masters effortless demolishing massive fighters). As one researcher put it while studying why Sumo wrestlers don't die of heart disease (which is actually a matter of overall fitness):

The rationale is simple: winning in the arena depends on momentum. And in high school physics, we learned that momentum = mass x speed. So they build up their mass, and they train them for speed, agility, and overall fitness.

Fat is easier to add to the body than muscle mass, and therefore the general method of building the proper body involves practices that inflate weight gain while also training to be able to move that weight.

Wrestlers are not normally allowed to eat breakfast and are expected to have a form of siesta after a large lunch. The most common type of lunch served is the traditional sumo meal of chankonabe, which consists of a simmering stew of various fish, meat, and vegetables cooked at table. It is usually eaten with rice and washed down with beer. This regimen of no breakfast and a large lunch followed by a sleep is intended to help wrestlers put on a lot of weight so as to compete more effectively.

Trying to compete in Sumo while training in a way that limits your mass gain is essentially competing with one arm tied behind your back by training for the wrong metric, like training for a boxing match by eschewing punching strength in favor of fancy footwork, or competing in a sport that does have weight limits while carrying excess fat that won't help you in the ring.

There are no specific physical requirements for sumo. The rules and culture of sumo reward being as big and strong as possible. There is no benefit to being lean or cutting body fat, so rikishi (sumo wrestlers) simply don't. They get brutally strong, and have simply enormous muscles hidden under their fat. Many pro sumo wrestlers match or exceed the muscle mass of pro bodybuilders; you just can't see it because they don't go through the extreme and frankly insane fat- and water-cutting processes that bodybuilders do to prepare for a show.

What happens in sumo is what happens in other strength and power sports: in lower weight classes, athletes are lean in order to be as strong (and big) as possible while remaining within the upper bound of their weight class. Surplus fat is extremely rare. For instance, Chinese olympic weightlifters Lu Xiaojun (77kg), Tian Tao (85kg), Liao Hui (69kg) all stay lean while getting very strong: 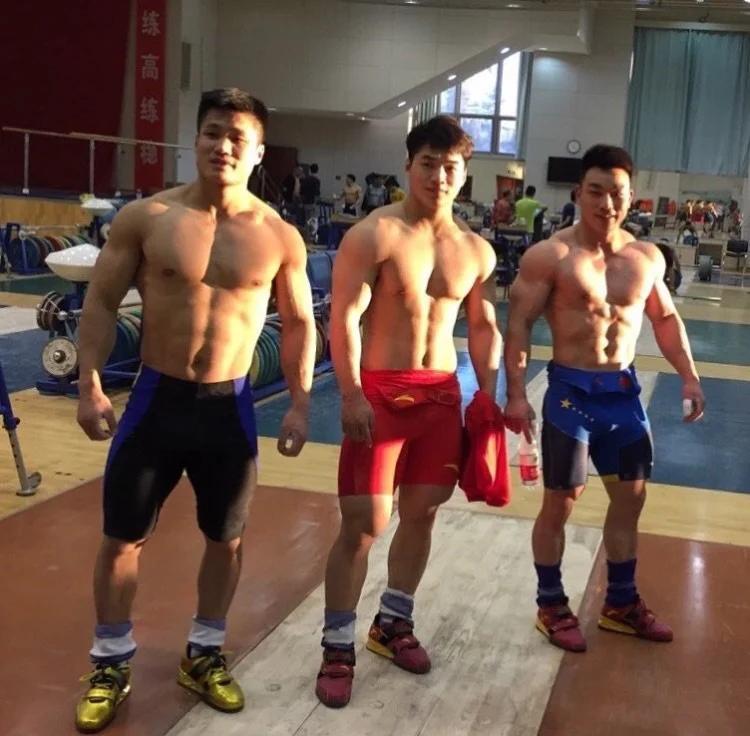 But at the highest weight class, or in sports like American football where there are no weight classes, the drive to be as strong as possible is not restricted by mass, and so athletes are quite large and have plenty of excess fat. (This proves how this is not an east/west phenomenon; NFL linebackers are not known for being lean, but athletes in running positions can be quite lean.) This is simply because there is no benefit to losing the fat, and plenty of drawbacks: it would take time and training effort, and would interfere (even if only slightly) with maximum muscle gain. So superheavyweight fighters and Olympic lifters are often chubby, even fat, such as the incredibly strong Olympic lifter Chingiz Mogushkov, seen here not having time to worry about visible abs because he's about to lift 250+ kilograms over his head: 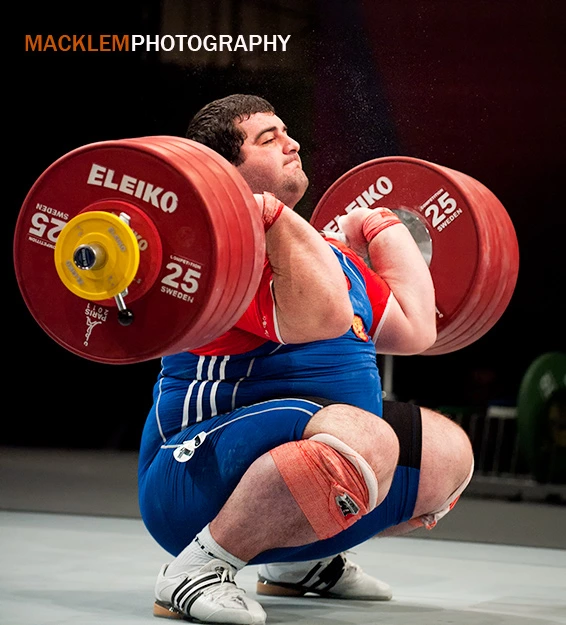 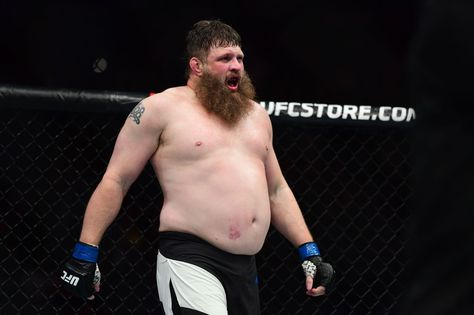 However, the fact that sumo rewards being as strong as possible--and even as big as possible, because it makes the athlete hard to push or move--does not mean that sumo wrestlers are uniformly fat. Some of the best rikishi of all time have been incredibly strong but also agile and relatively lean. My favorite is Chiyonofuji, who reached the rareified top rank of yokozuna: 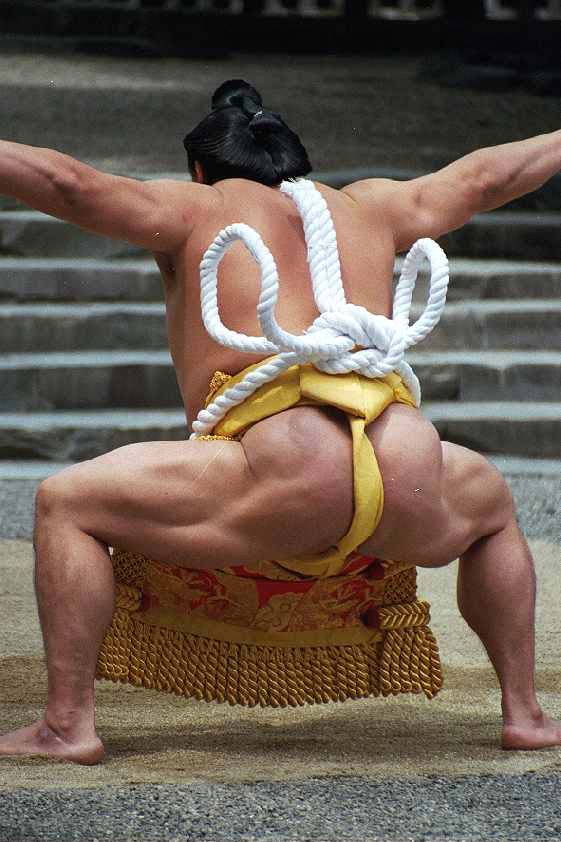 If you think this wrestler is not muscular, please remember that he was 127kg and 183cm. That is a very, very muscular athlete; he is simply at a healthy and strong body fat percentage. (For those not used to recognizing muscular builds outside of bodybuilding, it helps to look for trapezius muscles between the shoulders and neck, or at the back and glutes.) Chiyonofuji was an incredible champion who looks even more jacked on video in action than he comes across in pictures.

Not the answer you're looking for? Browse other questions tagged history wrestling sumo or ask your own question.