What is the proper technique for holding a Century-style body shield for use in Taekwondo?

My family just won a Century body shield as part of a raffle to help raise money for our school's booster club. We don't often use a body shield in class (in fact, I only recall having used it in one drill and that was when helping a younger student whose aim was somewhat questionable) and so I'm at a bit of a loss on the proper technique for holding the shield for various drills typical in Taekwondo (particularly kicking drills). Simply put, what is the proper technique for holding a body shield? 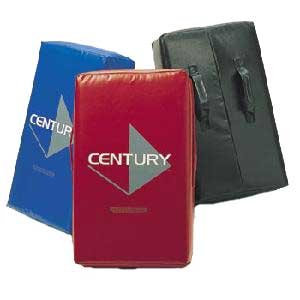 I never used these when I briefly took Tae Kwon Do when I was younger, but we use these same kicking pads in my kung fu classes. The way we hold them depends on the kick, but in general we tend to hold the pad close and braced against our bodies while in a grounded stance. I don't quite recall the stances in Tae Kwon Do, but I'm sure there is some analogue to what we do in kung fu.

For some thing like a roundhouse kick, we use stand in a stance where one foot is front of the other (knee bent) and the back foot is extended out. I believe "walking stance" (gunnun sogi, ap kubi) is the general terminology of what I'm describing. In terms of holding the pad, we wrap one arm in the two back handles and use the other to hold the side handle. The placement of the pad is either to the right or left of our body (depending on what side leg is doing the kick).

For something like a front kick or side kick, we use the same forward leaning stance while holding the pad the same way (one arm wrapped in the handles, the other holding the side handle), but with the pad in front. For some people, it may be easier for them to hold the pad on their side while in a "sitting stance" (annun sogi, jumchum sogi, horse riding stance, or middle stance). I find the latter to be better for absorbing the impact from these type of kicks though.

For axe kicks, crescent kicks, or spinning kicks, I would hold the pad in a way so that the eventual momentum transferred to the pad is unrestricted (in the direction of the kick). For a crescent kick, I would just hold the pad out facing sidewards and let the other person swing the leg and kick the pad. Don't try to resist the incoming force; just move with it and let it go. If the pad flies out, it's not a huge issue.

Sometimes you will have to adjust your stance based on how much room you have in relation to where the kick will be traveling. You may also have to adjust for height differences, but that is as simple as kneeling on the floor for young and small children or just standing a little higher in your stance. One thing I do not recommend doing is extending your arms out. You don't want the impact to shoot straight into your arms (as you could hurt your elbows or shoulders in the process) as much as letting the impact disperse throughout your whole body.

This shield is often used to practice the power of forward/front kicks, as an alternative to a kicking bag. Usually is used for front kicks (ap chagui), side kicks (yeop chagui) or back kicks (tuit chagui).

If you have few or no kicking bags available, it may be more effective to use this type of shield to have students practice in pairs.

From my experience this is how you should use it:

Not the answer you're looking for? Browse other questions tagged equipment tae-kwon-do or ask your own question.

12
What is the "sine wave" substyle of ITF taekwondo and how did it originate?
4
What are the starting points for learning Tae Kwon Do?
7
What is the name of this Taekwondo black belt bo form?
8
What do I need to promote someone to Taekwondo dan rank under the Kukkiwon?
4
What is the most effective method for the roundhouse kick?
7
What is the purpose of the upward palm block in Taekwondo
4
Is the Push Side Kick a Taekwondo technique?
6
What is the name of this temple on Taekwondo educational videos
4
What kind of glove is being shown in the following pictures, and why is it nearly always a knife user who wear this style of gloves?
4
Why doesn't Muay Thai use the Karate/Taekwondo front snap kick?