The ura-waza (as shown in this video) is a set of ten counters to the basic seventeen techniques of Shodokan Aikido. Those are shown in the first part of the video. While I know the technical details of the kata, I am lacking historical knowledge of it.

How did Tomiki create and evolved this kata to its current form?

The kata in this video shows the basic applications of kaeshi waza, meaning counter techniques. The history of kaeshi waza goes before the foundation of aikido, it is already a known concept in older martial arts like jiu jitsu, judo, etc. Here is a link to Judo terminology.

It is of course no surprise as Aikido has its root in older budo arts. Shihan Stefan Stenudd (7.Dan) has a nice list of kaeshi applications for Aikido in his website, showing which technique can be countered with which: Table of Kaeshiwaza techniques I also add a screenshot of the table, so we will not lose the information if the website goes offline. 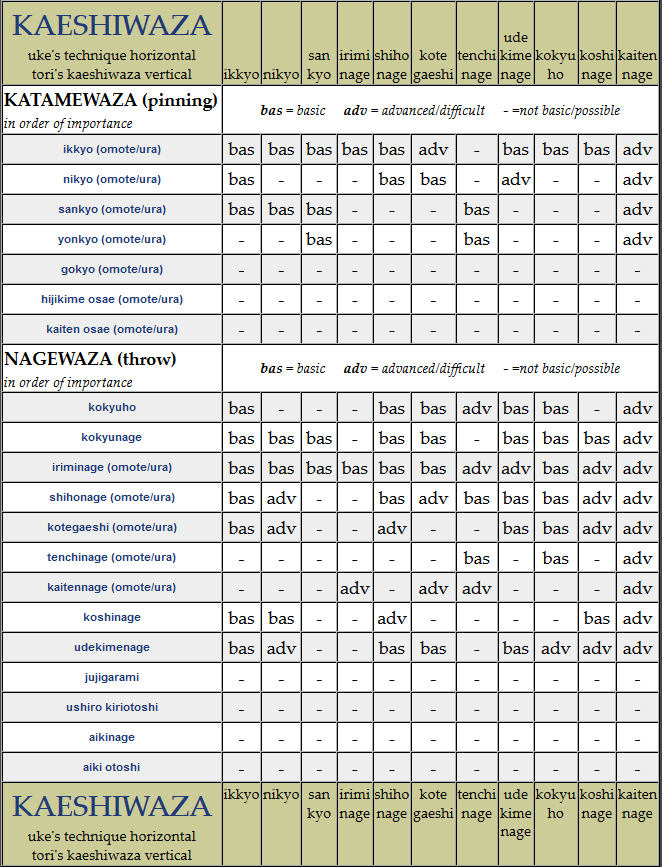 As the last point why some Aikido schools don't teach Kaeshi waza and some do, is difficult to answer. I have once heard from Shihan Adrien Halm (8.Dan), who is a disciple of Hirokazu Kobayashi, that O'Sensei teached Kaeshi waza before the World War 2. After the war it was removed from the art because of the martial arts ban between 1945-1950 in Japan. However I could not find any source or documentation to support this argument. It might be a speculation.

The ura-waza was developed by Tomiki-sensei as an example of counter techniques that could be done within toshu randori. However, two problems emerged: First, toshu randori tended to end up as Judo more often than not. This was due to the distance being inadequate to do Aikido and the fact that all practitioners knew Judo well. Second, the counters did not really map well to toshu-randori.

Tomiki-sensei introduced the tanto to keep a good aiki distance between partners to address the first (and root) problem. As such, the kata is not as relevant as the newer tanto kaeshi waza developed by Nariyama-sensei and is therefore more of a "museum piece".

Gleamed from a conversation with Scott Allbright sensei.

JuJutsu (not Jiu Jitsu) is definitely the precursor to Aikido. By more than 1000 years. The father of Aikido, Morihei Ueshiba, has an amazing life story. His book, The Art of Peace, is definitely worth a read if you're interested in gaining more insight into the art. Particularly noteworthy was his training relationship with Sokaku Takeda.

Not the answer you're looking for? Browse other questions tagged aikido history shodokan or ask your own question.

1
Can any arbitrary technique be used to counter a certain technique in Shodokan aikido?

8
What are the origins of "tricking"?
12
Who were the first female aikidoka?
10
Aikido jo-staff origins
10
Video evidence of Aikido applied against a resisting non-aikidoka?
3
How to avoid knee pain/injury during Shikko waza?
7
Explanation of the goshin-ho kata…
5
Historical esgrimas de navaja technical manuals
11
Benefits of training with suwari waza
4
Shodokan or Tomiki Aikido, which is the proper name for the style and organization?