Do women have any advantages in sword fighting

A bit of backstory:

But then I wondered if the lower center of gravity would help in side to side movements. And if it would help in deflecting opponents attacks to off balance them.

Reach matters with melee weapons, however... it matters most when you're fighting with similar weapons. Since your context is specifically "sword vs. sword" presumably of similar type, reach is going to matter.

You can change the effects of natural reach with things like longer weapons (polearms, for example) or a means of blocking while entering - shields, parrying weapons, etc... which is typically what you see happens with smaller combatants of any gender.

For weapons, skill matters the most. It's about reach, timing, and angles, not hammering through people's defenses. This is why even in the sparring heavy/competitive spaces you find a broader age range of high level practitioners than empty hand sports. So in this regard, the usual issues of strength matter less.

Of course, if you are thinking about things like grappling included in your sword fight, or the larger context of "We're marching 30 miles, carrying camp equipment for our army, then we fight" - strength and frame size can become very important.

So, while women have no specific advantages in a sword fight, the usual claims of disadvantages are not in the way most people think, and unless you're looking at a duel of similar weapons, most people would just do the sensible thing and fight with a different weapon to make up the difference of reach.

The winner in a fight is generally the one with the more skill. And skill can be acquired regardless of gender. The nature vs nurture debate might rage here saying that some people are better suited genetically (mentally or/and physically) to certain things rather than others. Still, spend ten years doing anything for eight hours a day and you will master it. Certain things such as weight, height, equipment quality, willpower, luck, etc., do play a part. However, such are relatively minor adjustments compared to skill.

The plural of anecdote is not evidence and while this or that event clearly shows David winning against Goliath, statistically Goliath squashes David a much larger number of times. Not a perfect analogy but you know what I am driving at…

On average, women tend to be physically smaller and less strong than men. That is a disadvantage when yielding mêlée weapons: Both strikes and parries will be weaker. The weight of the weapon one can swing will either be less or one will not be able to do it for as long as a stronger opponent. Any increase in speed/agility by giving up weight is negligible: it actually does not matter that much if you are athletic. Size cannot be changed, but does not affect your hitting area that just in any case at mêlée range.

While some might claim that cleavage is distracting (thus bikini-armour) and that gentlemen do not hit ladies, this is nothing but sexist manure. However, sexism might spur a woman to excel by training much harder than her male counterparts to prove she is as good as they are. This was the case of an old sensei of mine. Clearly, most of the time, it is a turn off and not a performance enhancer -- just to be clear.

Something that I did notice is that dancers pick up kata (empty handed or weapon based) at an accelerated rate: they are used to following patterns and their eyes grasp the movement much quicker than most non-dancer. Since most dancers are female, this is an advantage but not one linked to gender.

When it come to sword-fighting, the most commonly brought up variables to consider that a woman would have differently vs. a man are that in general women don't have as much muscle mass as a man and are generally shorter (with consideration of course for obvious exceptions like a particularly tall, swole woman fighting a particularly short, wimpy man, etc. People's bodies regardless of gender have a surprising amount of variety in them you know... ).

The muscle mass issue matters in regards to two things:

First, it may limit the kind of sword you can use comfortably. This point is a bit complicated since there is a surprising variety of swords with differing weights, balances, profiles, etc. within a specific class of sword and having less muscle mass isn't a handicap per se since you can just pick out a sword that you feel comfortable using and focus on attacking certain targets more than others depending on what the situation calls for. This discussion of the different types of swords within a specific class and whether any one of them is "better" or "worse" could be an entire discussion in-of-itself, but to give you just a brief example, take a look at these two longswords: 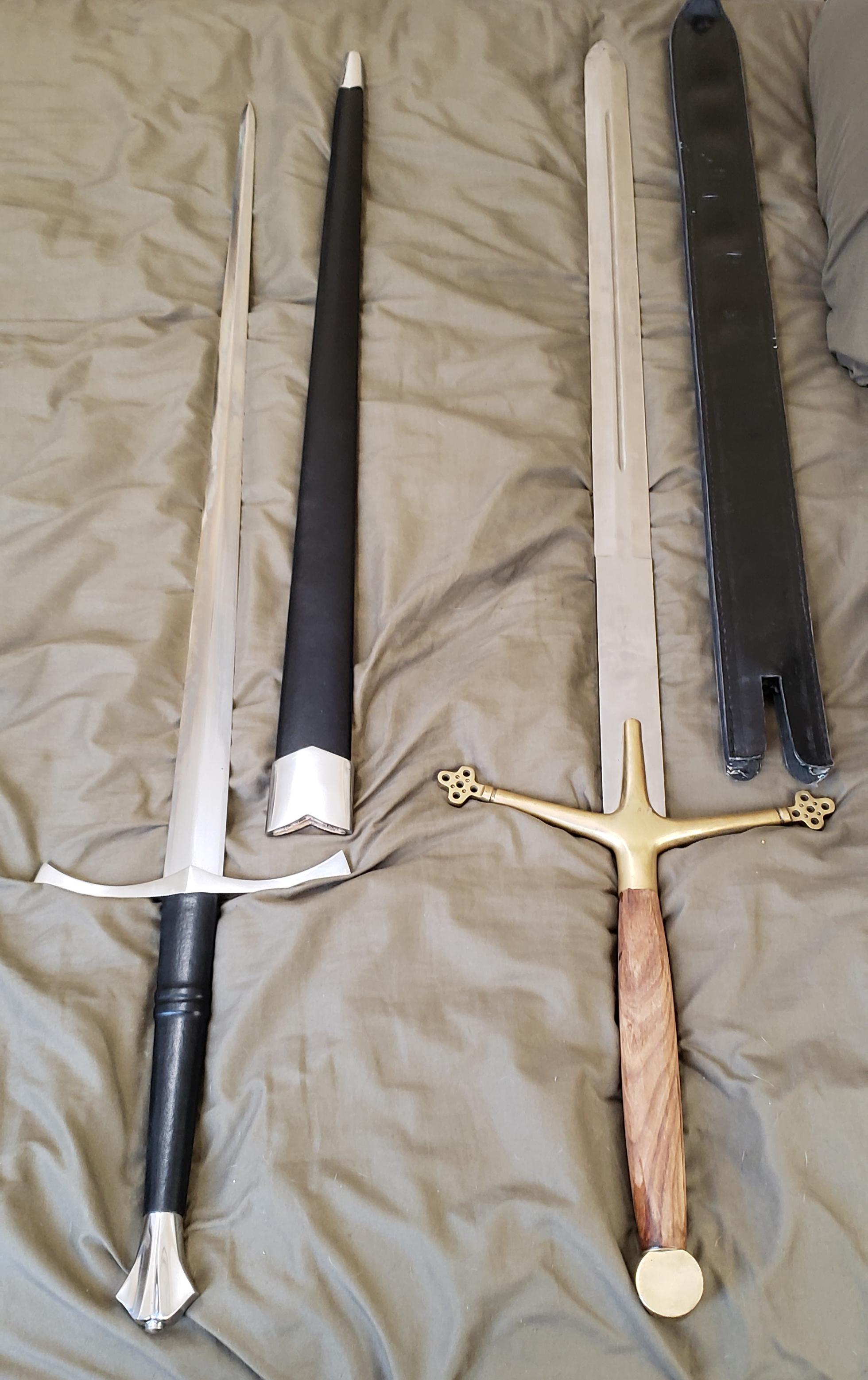 Both those weapons are types of longswords, but one is very thin, pointy and light while the other is wide and chunky and a beefy chopper. The former will be much easier for someone with much less muscle mass to wield vs. the later, but both can kill equally well; just in different ways. The chunkier sword is nice if you want to guarantee an easier cut and the thin one will have deadly thrusts, but that doesn't mean the lighter sword cannot cut at all if you hit the right target and accelerate it enough to deliver an effective cut. One of the most commonly targeted hits in HEMA longsword is often the hands and in a man vs. woman fight over who can hit who's hand more easily, the gender of the hand holding the sword doesn't matter that much at all and what's more important is the sword itself and the speed at which the hand holding the sword can hit. Theoretically, yes, a stronger person could wield a longer sword and potentially wield it more easily than one who isn't as strong, but you have to keep in mind that swords are primarily sidearms and there is a point of diminishing returns regarding how long of a sword any individual will want to carry around and remain practical for everyday wear and use (unless of course you're talking about greatswords which cannot be comfortably worn, but that's an entirely different kettle of fish to get into :P ).

The second issue regarding strength is that it will make grappling more difficult if you have less muscle mass. There are a number of styles of longsword (Fiore comes to mind) that emphasize grappling and not having the strength can be a detriment. With that said though, depending on the sword you choose and how comfortable you are at using it, you can compensate for the grappling weakness by either keeping the opponent at bay to prevent a grapple from occurring in the first place, or if a grapple does occur, choke up on or retract your sword into a stance like half-sword or schlussel to enhance your grappling game. Muscles are nice in grappling, but they make a poor defense against a sharp blade applied up close if you know what I mean...

TL;DR Women due to size and strength differences are generally at a slight disadvantage, but in the mess of other variables like the type of sword you're using, reaction time, skill level, fitness level, different martial arts philosophies, personal psychology, how sharp your sword is, how easy your opponent's clothing is to compromise with your sword, what guard you're currently in vs. your opponent's, etc. it's not actually that big of a disadvantage and some of these things aren't always a clear black or white advantage/disadvantage. In other words, gender is just another variable in a sword fight that makes things complicated just like everything else an individual who is not the same as you brings to any martial encounter and a good martial artist/swordsman/swordswoman will be able to compensate for these variables to hopefully come out on top.

I wouldn't say advantage but my experience is that women have greater aptitude for Wudang sword which is often subtle and indirect.

(For this reason it is also important to train in Shaolin sword if starting young enough, for its emphasis on building physical strength, and techniques such as aggressive thrusts and lunges, even if lunges are not recommended for historical fencing.)

This allows more decisive counters, and the best strike in swordplay is the safest—not an initial thrust, hoping to hit before your opponent reacts, but having countered definitively, such that a riposte can be delivered with no possibility of reply.

As footwork and posture can be said to be even more crucial in wudang sparring than other internal arts b/c swords can be instantly fatal, having more grace, lower risk tolerance, and even some dance training, is a huge asset, speaking as a teacher, both in terms of poise and flexibility.

(Sometimes women students have trouble making cuts like they mean it, but they typically have better basics than the guys.)

Here's a video of Cheng Man-Ching doing an internal fencing exercise designed to develop "sticky" (maintaining contact with the opponent's blade to control it and counter decisively) and teaching intention (swordplay is the channeling of intention through body and blade.)

Although sword sparring comes mostly to wrist cuts, point fighting, and occasional wave counters, having developed the stickiness and intention shown in the wudang fencing video is ever more essential.

FIE fencing, because of the use of non-combat weight weapons, and lack of consequences for getting hit, clearly makes pure speed definitive in competition, but HEMA longsword suggest that historical weight weapons can mitigate that advantage.

Wudang is advantageous here because it utilizes the waist, not arms, to make "drawing" cuts, thus lower strength shouldn't be a factor. Waist is also use to power and enhance the power of a variety of cuts and thrusts and counters, pretty much everything. As for cuts which purely rely on wrist strength, it doesn't require all that much to slice into skin and flesh with a sharp edge.

At least in this style, which is close fighting, and, aside from the primary technique of wrist cuts, prefers to attack from inside.

In the recent HEMA program, Knight Fight, which featured armored melee, hip throws were a regularly applied technique, and lower center of gravity can be definitively advantageous in grappling.

If I lock blades with someone down by the guard, putting them on the ground is my goto. (Wudang fencers typically spend as much or more time practicing grappling in the form of tai chi & bagua as they do on blade training.)

Not the answer you're looking for? Browse other questions tagged sword women or ask your own question.

10
Left handed Japanese sword techniques
5
Buying My First Metal Sword (HEMA)
6
Choice of a sword for HEMA
4
When to bind in european sword & buckler?
3
Are there any shortsword treatises/sources?
7
Purpose of non-sword hand movements
3
Is there a legitimate fighting technique using dual sword on horse?
1
Why is kickboxing so popular for women?
14
Etiquette for sparring with women - How to find the balance and not do disservice?
6
Does blade flex have any function beyond durability?