The Navaja is a Spanish knife, which started as a tool (like most knives) and ended up being used for fighting. During Napoleonic times, it was banned by the French, to quote wikipedia:

The navaja de muelles proved sufficiently formidable as an offensive arm that it was specifically named by the Marqués de la Mina, the Spanish military governor of Catalonia, in his edict of 29 May 1750 prohibiting the carrying of armas blancas, or edged weapons.[10]

Despite official disapproval, the navaja de muelles became popular throughout Spain as a fighting and general utility knife, and was the primary personal arm of the Spanish guerrilleros who opposed Napoleon during his invasion and subsequent occupation of Spain in the Peninsular War of 1808–1814.

I found this video showing how it is used now or Curro Jiménez - Duelo de Navajas.

However, I am interested in technical manuals that would have existed in Napoleonic times1. Either from primary sources (since my Spanish is very limited, translated text or pictures would be better) or form a current practitioner with knowledge of such.

1: Why only Napoleonic times? I am writing a character for an pen & paper RPG set in that time period. This is research so I can accurately portrait their fighting techniques.

If 1849 is recent enough, there's the Manual del Baratero. I've only found a partial translation available for free, but there are a few ones for sale such as this one. 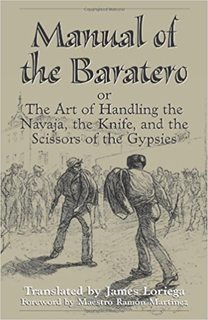 Excerpt from the free online translation:

The instruction for wielding the navaja is divided into four parts. The first part contains lessons on the characteristics of the weapon and its different techniques. In the second the guards are analyzed, the manner of attacking the enemy is explained, to give a small idea of the various ways in which it is performed, and the tretas are discussed. In the third is the method of wielding the cuchillo. Finaly, in the fourth are lessons on the method of wielding the tijeras as in practice among the jitanos. The first part is divided into eleven lessons, the second into 12, the third in six, and the fourth in two, in the following manner.

THE POSITIONS OR STANCES

Those skilled in wielding the navaja take their first position or stance, in a similar manner to that of the espada and sable, which is called guardia. After taking the navaja in either of the hands place the thumb upon the first third of the blade, whose edge should lie towards the inside, place yourself in guardia at a reasonable distance from your opponent, better far than near, with the unoccupied hand held against the body at the waist and in front of the abdomen, and in such a disposition so as to be ready to recieve the navaja when you wish to make a cambio; the feet and legs are placed at equal distance from the oponent, a little open, and in such a manner that all the body faces front and none to the side, as is seen in the present figure: but not when a hat, cap, jacket or mantle is used in either of the hands, in which case you should arrange yourself with the leg on the same side as the arm in which is the hat or cap, towards the front and in the manner of the figure found in lesson eight, the Cambios.

Upon coming on guard take care to draw in the abdomen all that is possible, for which effect it will be neccesary to stoop a little, or else the face will be exposed too far forward, will recieve a blow, and be disgraced. The eyes are always fixed on those of the enemy; in an unwavering manner, even if provoked with feints, words or gestures; it is neccesary to point out that good wielding of the navaja lies essentialy in the swiftness of the eyes and feet, as we now move on.

From the introduction by Maestro Ramon Martinez, director of Martinez Academy of Arms, President of the association for historical fencing and founding member of the International Masters at Arms Federation:

After my meeting with Maestro Loriega, I read the Manual again more carefully and come to realise that here was a manual of the Destreza for the common man. Though extremely brief and superficially written, Manual del Baratero is nonetheless the first book on the art of Spanish knife fighting ever published and the only known historical text on the subject. Even though Mariano de Rementeria y Fica may not have had in-depth knowledge of the methods of the navaja, he nonetheless provided for posterity a window to the methods of knife fighting practices in 19th century Spain by the working class, the barateros, and, in particular, the Gypsies.

Sardathrion, having read the book, confirms that this is a good description of the manual although the translator notes make the technical aspect much clearer. Some of the original drawings were published in 1836 and the manual was first published in 1849, so about 35 years after The Peninsular War (1807–1814). Sardathrion seriously doubt that much had changed in that time frame. Most of the technology and weaponry were the same. In any case, they are not striving for 100% historical accuracy, just enough to be thematically appropriate. The manual is perfect for Sardathrion's needs.

Not the answer you're looking for? Browse other questions tagged history knife-fighting or ask your own question.