Purpose of the supported palm block in the Taegeuk Chill Jang

The Taegeuk Chill jang move #7 is a supported palm block: the left hand fist faced down, supporting the elbow of the right arm performing a palm block.

From an applied poomsae point of view, what is the case for the need of the supporting arm? Is it also a block, like in the Taegeuk Sa Jang move #2?

The below image pictures to movement being explained by Grand Master Kyu Hyung Lee, taken from a video near 2:20: 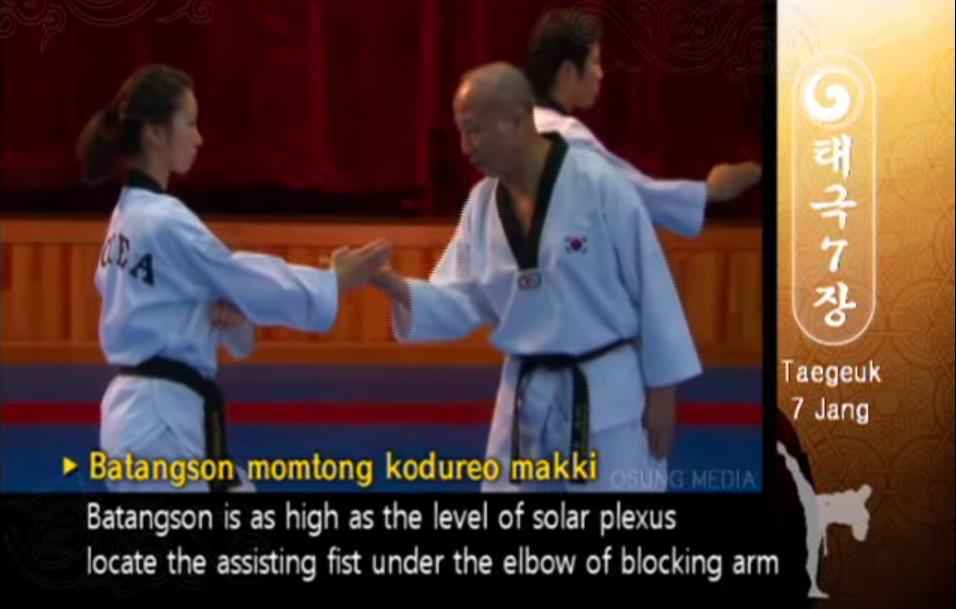 The movement in TG7 can be a cross grab of opponent's arm or clothing with your left hand; the palm "block" is a strike to the elbow (and follow-up backfist to the face).

The way you decode it is to understand that the fist under the armpit isn't punching or chambering; rather, because it is a fist, it is grabbing onto something. The block is a palm block, which is a soft weapon use to strike a hard target (rule: soft-to-hard; hard-to-soft), in this case, it is the elbow.

A similar alternative application (although not for this form) is that the palm is issuing control of the elbow, which can be used for a take-down. The reason this isn't applicable to this form is because the backfist assumes you give up the takedown for a backfist, which is not a reasonable application. Nevertheless, many times we issue a palm block like this, such an application might be possible.

You can see several examples of the control through the elbow in this video:

Opponent cross grabs you (lapel, hair, wrist, etc) with his RIGHT hand. You counter by grabbing his elbow/clothing with your LEFT hand, and cross it in front of you toward your RIGHT side and slightly DOWN. (This can off-balance him, throwing his other shoulder back.) Now that you don't have to worry about the other hand, the RIGHT elbow you are grabbing turns your opponent so that you can strike his face with a RIGHT HAND hammer fist and then follow up with a RIGHT HAND backfist to the face.

Now, with this variation, you do have to move slightly different than in the poomsae. It is like a scissors block, as seen in Taebaek. You grab his elbow (or clothing) with your LEFT and lead it to your RIGHT side - that should turn him. You have to drop his elbow slightly as you might in the scissors block, because you need to get your RIGHT hand on top of the elbow assembly. But you don't want to drop it too much too low, or he will not turn.

You have your armpit fist grabbing the opponent's wrist in a wrist lock (his wrist is upward, elbow and palm down, and fingers pointing toward him and downward to his own feet). Japanese call this kotegaishi, Koreans call it boo chae.

With this variation (admittedly an advanced one), your elbow applies pressure to his bow wrist; while in excruciating pain, strike his face with the backfist.

To acquire the wrist lock, it could be that with either of his hands he attempted to grab you by the neck or lapel; or he threatened you with a knife close to your face; or you caught him off-balance. This variation requires that you secure his wrist by first grabbing his wrist as if you were taking his pulse.

In short, you're grabbing his wrist from the inside of it (like taking a pulse).

A similar variation to the last, you grab his wrist again; this time, you grab it from the outside (back of the wrist) - opposite from the last method which "takes the pulse".

In this method, you are not bending the wrist forward as it bows; instead, you are bending it backward.

In this and the last case, you are using your elbow to apply the pressure against the wrist to induce compliance.

In both of these cases, you'll note you're in a beom-seogi (cat stance) which lends itself to lowering your body and directly facing the opponent. As you lower your body, you apply more pressure to the wrist lock without compromizing your balance.

You can see two examples in this video at precisely :02 and :13

The big difference here is Mr Tissier holds his thumb down, whereas in our poomsae, the thumb is up.

With the thumb up, as in the poomsae, we can also imagine an X-throw, as in this video:

In this throw, you have the option to keep grabbing the opponent, as in the video; or you can use your knifehand and not grab the opponent. The former is to control the opponent, perhaps as a come-along; the latter is to throw the opponent. Because this is TG4, the likelihood it assumes the less difficult throw method is assumed, the come-along is more complex and the stance doesn't lend itself to the technique. When the student gets more advanced, the come-along can be studied as well, adjusting for stance, etc.

FWIW I stand in stark contrast to Kukkiwon's and Gen Choi's applications for poomsae, many do not make sense to me. The hand under the arm (both cases) otherwise is wasted or given a menial task like "assisting". So I prefer the bunhae offered from Karate and Aikido backgrounds, since our style was heavily influenced from Karate at the time the forms were made. Hence, I provided the Aikido form videos.

Having researched further, I can find no article, book, or blog, except one (see below) on the concept of "assisting" with regards to these kinds of techniques. There are a few examples in KKW and ITF poomsae, of "assisting techniques". This technique is one example. Another is a double forearm block, sometimes called an assisted outside block, (see Sipjin poomsae for example). And in these cases, no one (except in a link, below) describes what is meant by "assisting". Usually, the technique is called a block, which is a farce in of itself; but if we do look at it being a "block", it can be readily acknowledged that the assisting hand is not, in fact, providing any assistance at all. Such can be seen in this question's example. What is the assisting hand actually doing? Is it supporting a block or strike? How? Is it preventing a reversal? Why the fist? Why the stance? Why do it in such a technically weak architectural position (ie, why not bring the assembly of blocking/striking/grabbing/whatever-the-primary-technique-is-doing down to a manageable place, instead of away from the body whereby it is structurally unsound?)

The assist is no "assist" at all. The block is no "block" at all. Nearly always, the assisting hand is engaging in a fist; this should be interpreted as a grab - clothing, arm, weapon, etc, depending on your bunhae. There are examples, like in Sipjin, where the assist really is an assist - but because we label the technique a block, we call the whole assembly as an assisted block (sonbadak kodureo momtong bakkat makki).

As to the exception I came across this article...

... it is curious to me that in this the author makes a rational analysis of this "block" which is that

The idea of this slow, augmented block is that your opponent has grabbed your arm, and you are either (a) twisting your arm to get him to release his grip, with your fingers prying under his grip to loosen the grip, or (b) using his grip against him, to force your opponent into an awkward position.

I'm not sure I buy into the fingers prying under the grip, but, this analysis is definitely more wholesome than what Kukkiwon provides. Kudos to the author, and shame on Kukkiwon for not describing this in this kind of detail.

I'm no fan at all of sourcing any Wiki sites, which by definition means community editing, and true source is usually dubious. However, the article does align with my belief, as I subscribe to those whose bunhae are more realistic (see: Karate). Nevertheless, such a description is a grappling maneuver, not a blocking maneuver. So the description is awesome, but still, the name suggests a thing otherwise.

So while the technique in this article does not apply to your question (it's not even the same form), the fact that there is this concept of "assisting" techniques really does throw people off into thinking it somehow is assisting in the block or strike, when in reality, it's an assist of a thing which we in Taekwondo often take for granted does not exist at all: grappling, throwing, locking, pinning, etc, and that it must be assisting in a block or a strike.

I've never had it explained on the Kukkiwon Master Instructor courses (twice attended) or the Kukkiwon Poom/Dan Examiner course, but I would guess that it's actually intended not to reinforce the block but because someone grabs your (reinforcing) hand and tries to punch you with their other one. In the picture, someone grabs the ladies left hand and tries to punch with the right, so she pulls her hand in to bring them closer, blocks the punch and counters with a backfist.

Not the answer you're looking for? Browse other questions tagged tae-kwon-do forms or ask your own question.

6
What are the primary differences between poomsae and hyungs?
3
“Spinning Block” Pattern Origination
10
Purpose of exchange block in toigye form
7
Taekwondo Block Bunkai Vs. Shotokan Block Bunkai
6
What is the purpose of the upward palm block in Taekwondo
4
Why was the Original Koryo form replaced?
7
What is the purpose of slow movements in poomsae / kata / taolu for?
6
Taegeuk Il Jang does not naturally end on the place you started
2
The sixth step in ITF TKD's Do-San form