A trope in several media, such as Bloodborne and Bleach for example, is weapons that have two mode that can be switched.In case you have no idea what I am talking about, here is a transformation of a Saw Cleaver trick weapon1 from Bloodborne:

While there are a lot of strange weapons used in martial arts such as the wind and fire wheel for example, I doubt that there are "trick weapons" in the real world as the mechanism for switching would probably weaken the weapon in either states. However, I could be wrong.

Is there such a weapon?

Note that either CardSharp credit card or switch blades do not really fit as they only have one offensive form, not multiple ones. Neither is a bayonet which is an addition to an already existing weapon. Neither is anything that requires a work shop or external tools to change shape -- so that get rides of modular fire arms and such.

1: Bloodborne is a mature game thus reader discretion is advised before following links.

If we are talking about blades like the one you mention a simple mechanics setup can make it useful like you mention. In reality though, few people had the metal/skill/money to actually craft a weapon like that during the time periods mentioned. Some examples that modern weapon smiths can probably create for functional use.

Blade/Shield: In principle this is a folding knife the size of a sword with the back of the blade matching with the handle to form a small oval shaped buckler with a tonfa like jabbing end(or not if optional hinge only is followed). The handle and blade would have to be a solid material to maintain impact.

Baton Blades: Solid blunt that has a removable end with a blade underneath and the removable part hooks into the handle to extend the handle.

Bracer blades: A forarm bracer that has a blade extension to function defensively and offensively.

Survival Weapons: These are more modern day survival weapons/tools and not historical.

In short, yes it's possible with technology today, but the usefulness of such weapons is likely only for mercenaries or fantasy replicas which makes the production of these custom and extremely expensive or cheap and easily breakable. You need a professional blacksmith/weapons maker and a solid design including the mechanics/weight distribution and movement physics to actually create one. The cost will likely be $500(US) on the cheap side and up to whatever you are willing to pay. For a good 30k you could likely make most anything you wish and it would be fully functional and sturdy.

Note: Ballistic projectiles adds more cost and you will likely end up paying much more than just the standard melee weapons.

Most "trick" weapons have historically been the tools of spies and assassins, and the trick was disguising a weapon as an innocuous object. That doesn't seem to be what you are interested in.

The M203 and Master Key are secondary weapon systems (a 40mm grenade launcher and 12 gauge shotgun respectively) which were designed to attach to an assault rifle. Accurate use of either subsystem requires a different grip and positioning of the weapon, and both have their own dedicated triggering and loading mechanisms. So, an individual would either be utilizing the rifle aspect, or the grenade launcher aspect, but couldn't optimally do both at the same time.

Other than that sort of weapon subsystem, I don't think you will find much. The circumstances in the game Bloodborne don't exist in the real world (particularly needing to cause differing kinds of damage to an enemy). There aren't (m)any combat situations where a transformable hybrid weapon would be favorable to carrying dedicated versions of the weapons needed and using them in turn. The hybrid weapons that have historically existed are of dubious function (see Lantern Shield and Pistol Sword). The properties which make a good firearm and a good sword have very little crossover.

Here is one example of a "trick weapon", the "MPMS" Multi-Purpose Metal Stick, which claims to allow the user "to combine or unfasten with a simple twist of the wrist" the unit into nightsticks, nunchuks, batons, or a billy club. 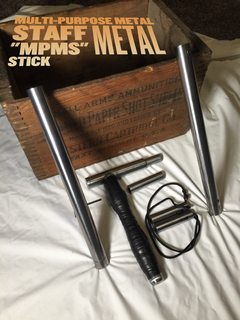 That said, I have not found any demonstration of this in use, so your mileage may vary.

Shikomizue katana sword, or popularly known as the Zatoichi sword, is a weapon which is disguised as a walking stick but actually a sword. It is believed to be invented during the Meiji Period (1868-1912), when the public carrying of weapons were restricted.

Not the answer you're looking for? Browse other questions tagged weapons fiction or ask your own question.

8
What martial art should I try if I want to train with a wide variety of weapons?