How can I build striking power?

I am asking how to develop strong punches, kicks, knee strikes and elbow strikes. I have attempted training my biceps, chest and back, but I feel as if my striking force is the same as before...

Coordination of muscle is key

It helps to have muscle, but... the real key is coordinating your muscles to work together to generate power. It's the same reason power lifters, who can undeniably lift and move great weight, don't make good baseball pitchers - the pitcher's ability is about coordination to generate power, not just muscle strength. Striking power is the same way.

Damage comes from good shots at places that count

Boxers often say, "It's the punch you're not ready for that knocks you out." If the person isn't protecting one of the better places for a knock out blow, it's quite possible they'll go down quickly - and most striking arts spend quite a bit of training and focus into trying to find ways to get to those spots.

In streetfights, the majority of damage comes in once someone hits the ground - stomping and downward blows put the full bodyweight behind the strikes and the target is unable to give any with the strikes- they are pressed into the ground so the full force hits them.

Many ways to get striking power

Different arts use different ways to get power. The most common is twisting the hips and pivoting on a foot - the boxer's cross, Muay Thai's roundhouse, many movements use this. The twisting moves your center of gravity and your striking limb gets the advantage of your weight transfer going into the target.

Some arts use a springing forward action to drive a thrusting attack - fencers, boxers with a jab, etc. Some add a small straightening of the back to get the torso muscles added. Many styles push off the back leg and let that small forward momentum provide the power.

Some styles use gravity - you strike as you step forward or to the side, "falling" into your strike. Your bodyweight falling is what powers the strike. Jack Dempsey wrote about it, and it shows up in a variety of fighting styles as well.

There's also styles that use things like specific muscle coordination, tightening core muscles, hard breathing, spiraling motion to get a little extra muscle power, and so on. When you dig into a variety of sports, you also find overlap with some of these techniques as well.

Contextual to what you're doing

So all these different methods? Generally are contextual to the type of fighting you're training for. The power generation of boxing has overlap, but differences with Muay Thai, which is why you see differences in both guards and foot placement. Arts that focus on using weapons or the possibility of weapons also have different guards and ways of dealing with things.

Whatever you're training, start with getting your form and delivery of your attacks better. Find out when and where you're supposed to be shifting weight, when and where you tense up, and when your strike is supposed to land in ALL of that. Practice the hell out of that timing to get the most force. It can help to deliberately play with the timing a bit - try doing things a little too early, a little later, just so you can find where the actual "perfect" spot is in that timing chain for you.

Then find out from your instructors/coaches if there are better situations for WHEN to deliver this strike on a target. "If you catch them mid-step, perfect!", "This is a great counter punch", etc. Then set up drills to get that down.

From a physics perspective, one way to think about striking is impulse:

To have an effective strike, you want to: 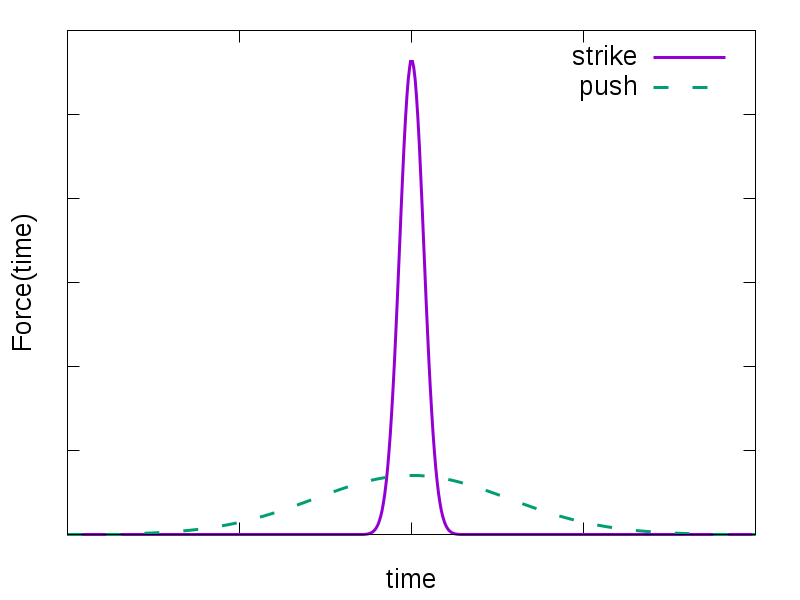 You have to work out for yourself what motions best combine these elements for your body. Your hook punch may have maximum velocity, but it may be hard to get your mass behind it effectively.

Remember that power or impulse is not everything. You can maximize striking power with an American football tackle, which uses your full body mass at running speed to make contact with all of your mass at the same time, but this is very easy to counter.

A second factor is energy dissipation from an inelastic collision. The energy from a strike, E=mv^2, must be accounted for in the movement of the target and damage internal to the target. With this consideration, velocity is more important than mass.

Not the answer you're looking for? Browse other questions tagged mixed-martial-arts self-training strength power striking or ask your own question.

4
What knocks a person out: Is it energy or force?
2
Is it possible to compile a list of discrete/distinct striking techniques (hands/arms)?

9
Which kind of breath provides the most striking power?
4
How much should the torso and shoulders rotate when throwing a powerful cross in Muay Thai?
6
Martial Art focused on upper body strikes
8
How to recover from (or defend against) pressure point strikes?
2
Is it possible to compile a list of discrete/distinct striking techniques (hands/arms)?
5
Why isn't striking part of Brazilian Jiu Jitsu?
5
Does bicep development affect punching power?
7
Why is the bob and weave not used much in MMA & Muay Thai or outside of boxing in general?