Are there any martial forms that utilize game boards as weapons?

Although this sounds absurd at first, there is a well known legend about the 12th Century samurai Satō Tadanobu beating back assassins with a goban. In the legend, he is said to have subsequently committed seppuku, which implies the board was an effective weapon.

I'm assuming 12th century game boards had more weight and solidity than modern, mass-produced boards, and Musashi Miyamoto is pretty outspoken on the point that a swordsman doesn't need a sword to kill enemies.

Chinese styles often incorporate "gimmick" weapons, probably to kindle interest in the arts, but also to make the point that anything can be a weapon. (Jackie Chan was a leading exemplar of "bench form", using a wooden bench as an effective weapon, in various films across his career.)

None of the 27 Shotokan kata include a go board, or anything similar in their applied applications. I've seen many Wado Ryu versions of the same kata and they do not include boards. 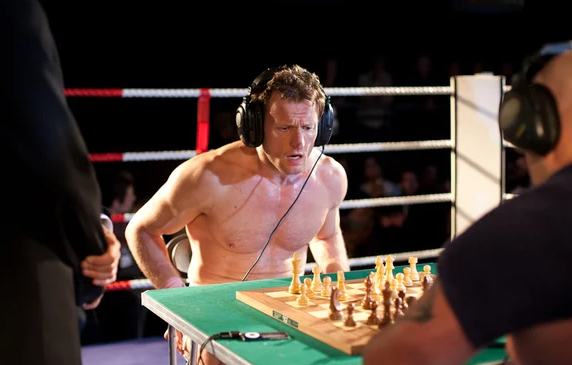 The sport of chess boxing is a martial art combined with the game of chess.

Boxing skills wear down your opponent and make it difficult for him or her to concentrate on the mental challenge of speed chess. Players must make a chess move within 10 seconds. The match can be won in any round by a knockout or a checkmate.

No, you are not allowed to hit your opponent with the chess board.

"Since 1992 the sport has gone global with countries including England, Germany, Netherlands, France, Russia and Japan all embracing the new sport.

Players have to be skilled in both boxing and chess to compete at the highest level...Players go head to head in chess boxing and the match starts with a four minute round of chess.

The players then go into the ring for a three minute round of boxing before again returning to the chess board.

The match consists of 11 rounds in all (6 rounds of chess and 5 rounds of boxing) with 1 minute intervals between rounds." Chess Boxing Rules

ESPN Video: "What is chess boxing, and how did it become a sport? Chess boxing inventor Iepe Rubingh explains the origins and rules of his quirky sport, which was inspired in part by a comic."

It's London vs Berlin: "...and please don't mention the war." Chess Boxing founder and President of the Chess Boxing Club Berlin, Iepe Rubingh, a Dutchman, talking trash to the Brits preparing to engage in chess boxing battle with Germany. Video: Chess Boxing Message from Berlin for London

5
Any way to repair a Jo that has become warped?
8
Are there good alternatives to wood for weapons?
9
Where can I find display cases for Chinese Martial Arts weapons?
13
Is there any information on pre-19th century Irish weapons-based martial arts?
8
What martial art should I try if I want to train with a wide variety of weapons?
6
Martial Arts Weapons for Home Defense?
12
What are the benefits of learning weapons?
4
What Resources Are There For Knife And Sword Rights Activism In The USA?
3
Are there any martial arts that use the boomerang?