When performing a poomsae, you should finish on the same spot where you started. Poomsaes are designed to be symmetric, and this should happen naturally if all the steps are done correctly and with exactly the same length.

That is the theory. But for the Taegeuk Il Jang, practiced by 8th Gup grades, this seems harder than it should, and you will usually end significantly behind the starting position.

The Taekwondo Wikia describes this problem, and even adds a graphical explanation, so it seems to be a known problem: 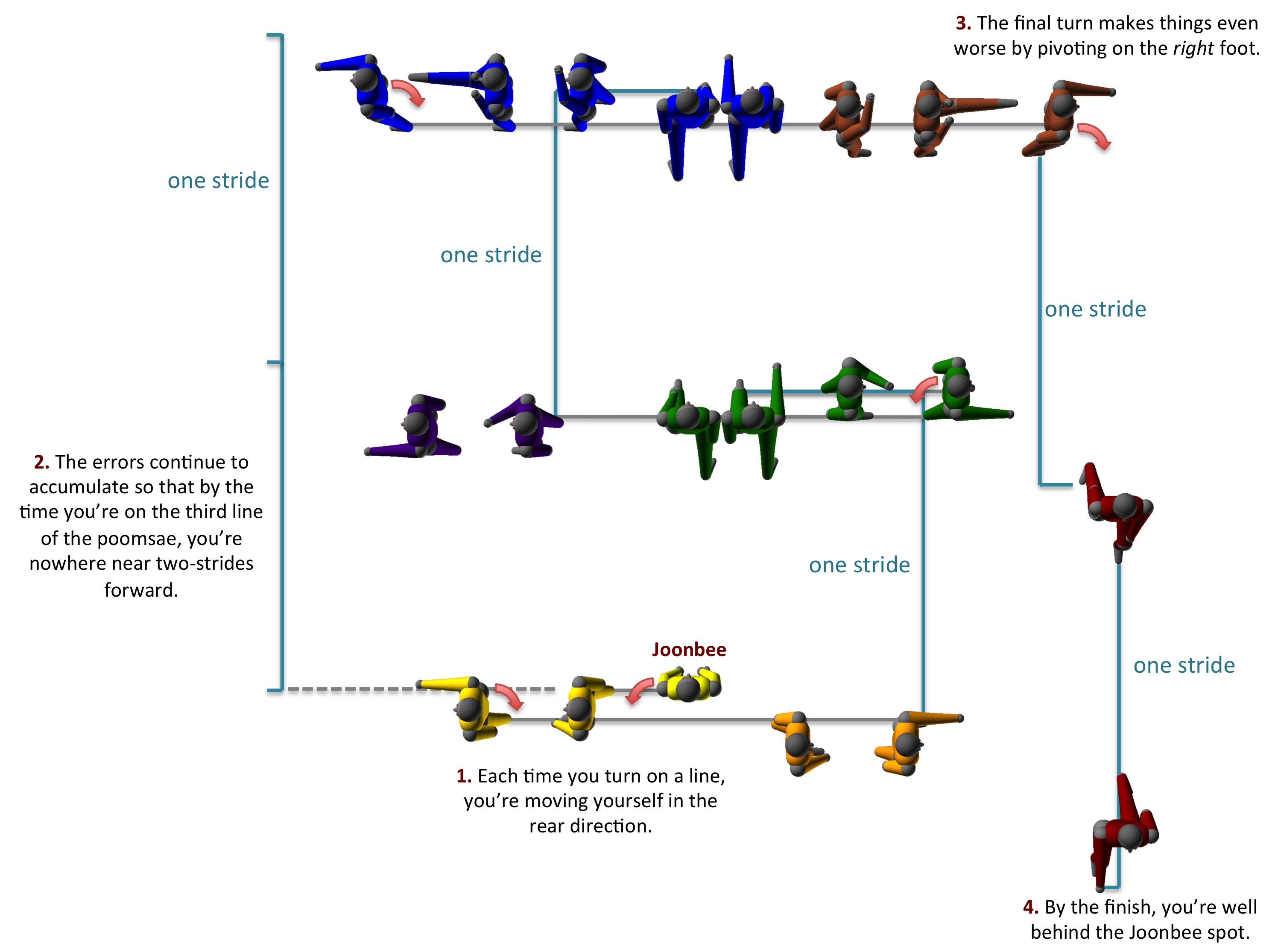 The solution is perform the sideways ap seogui with the feet close to an imaginary line, not too spread apart, and to compensate the error by performing the two final ap kubi steps, going back to the starting position, a bit shorter than usual.

Is this some kind of "design flaw" of the pattern, or is this just an execution flaw, in the the steps and turns are not being properly done?

There are several poomsae with exception to the start and stop on the same spot: Keumgang and Jitae are also exceptions as defined here, in WT(f) Poomsae competition rules:

See page 22, bullet 7 for the exception. The competition allows to take a .1 point deduction whenever any of the foot postures or hand movements is not performed as explained in the score guidelines handbook, and, this book says there must be no more than one foot allowance (from start/stop position) with keumgang and jitae as exceptions.

I have always found that starting and stopping on the same spot for TG1 form was not possible, if you perform the techniques properly. But this is a basic form, and there cannot be any expectation of a beginner to execute this line perfectly for any form, so, my guess is that such is not the focal part of this form at this level. With more advanced forms, there is the expectation of that discipline.

Nobody seriously competes with this form anyway, which is why it's not listed in the WT guide for poomsae competition.

Not the answer you're looking for? Browse other questions tagged tae-kwon-do forms or ask your own question.

5
How does one better execute kick then punch combos when the legs are significantly longer than the arms?
5
If Karate is supposed to be way of the empty-handed, then why does Gosoku-ryū use weapon katas?
3
How does the Karate Styles Shotokan and Gōjū-ryū compare to each other?
4
How do you harden the outer side of your thighs?
2
Why are there 52 moves in the ITF form Choong-Jang?
4
Purpose of the supported palm block in the Taegeuk Chill Jang
5
Why do the 2020 Summer Olympics have Kata but not Poomsae?