Is there any move (push?) in combat sports that hits an opponent and increases the distance to the opponent, while not throwing them to the ground?

I think pushing an opponent strongly is what I look for?

But while Wikipedia has an extensive article about throws, I can find little about pushes wrt combat sports.

Maybe pushes are so impractical that no one uses them on the ring and no discipline codifies them?

Is this the case? Or if not, how is such a move called and how does it look like?

I only come here having failed to find a description of a relevant move on Wikipedia.

In Taekwondo you have the push kick, miro chagui.

The front push kick is similar to the front snap kick, but the knee is raised a little higher to produce a slight downward and frontward movement, pushing away the opponent.

The push kick is frequently used in sparring, and is also a simple and effective technique for self defense situations. 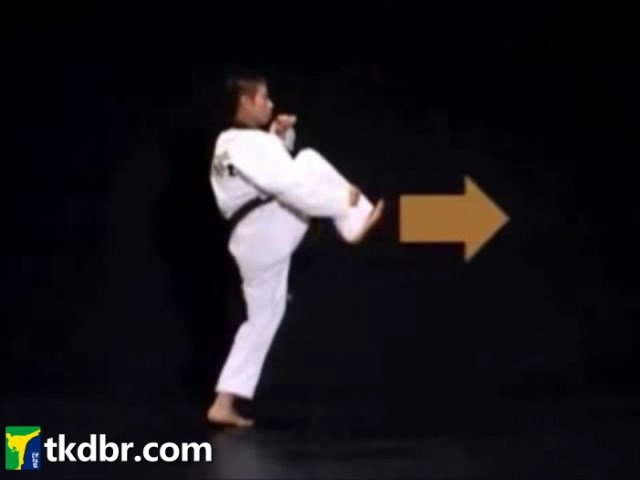 Pushes do not tend to score points in combat sports points based combat sports. In Full Contact combat sports they gain little advantage unless you are able to either take the opponent to the floor or gain a position advantage from them.

However in Chinese martial styles and their derivatives (which are not 'combat sports' but are fighting methods) pushes are fairly common.
In one of my first Shorinji Kempo classes we were shown how to adapt a block and punch technique called uchi uke zuki into a block and push technique.

We also talk about Tai Atari where you essentially body slam an opponent.

In either case the trick to these techniques is to use the weak points in the opponent's balance. There are 6 of these in a normal fighters stance:

Draw a line from the smallest toe on the left foot to the heel on the right foot. The ends of this line extended out are two of the weak points.

Similarly Draw a line from the smallest toe on the right foot to the heel of the left foot. the ends of this line are two more weak points.

Where these lines meet is the center of balance. At 90 degrees to a line passing through this point and each foot is a new line. The last two week points are on this line. (often called the 'tip of the triangle' by martial artists of all disciplines)

If you push someone along one of these lines they will stagger. Push them fast enough they may even fall over. This is very useful in self defense as it will give you a moment to run.

I believe some forms of aikido also teach similar pushes, but I am less familiar with this style.

Sumo has many pushes that are not necessarily throws. Within sumo rules, it is only necessary to push the opponent outside the circle to win. With this goal in mind, it is probably advantageous to maintain contact (not increase distance) until the opponent is defeated.

I think this is called oshidashi, but I am not really familiar with sumo technique classification.

Taiji (taichi), which I do not consider a combat sport, uses many pushes. The basic sequence of techniques peng, lu, ji, an can be practiced in pushing hands practice to push and displace the opponent: footage of Cheng Man Ching.

Not the answer you're looking for? Browse other questions tagged terminology striking or ask your own question.

9
Is there any specific name for a move when a fighter dodges their opponent's punch and counter-punches at the same time?